Tourists watch from the roadside as dense smoke darkens the sky from reignited forest fires north of Grimaud, in the department of Var, southern France on August 18, 2021. - (Photo by NICOLAS TUCAT / AFP)

The warmest summer on record featured a heatwave along the Mediterranean rim lasting weeks and the hottest day ever registered in Europe, a blistering 48.8C (120 degrees Fahrenheit) in Italy’s Sicily.

In Greece, high temperatures fuelled deadly wildfires described by the prime minister as the country’s “greatest ecological disaster in decades”.

Forests and homes across more than 8,000 square kilometres (3,000 square miles) were burned to the ground. 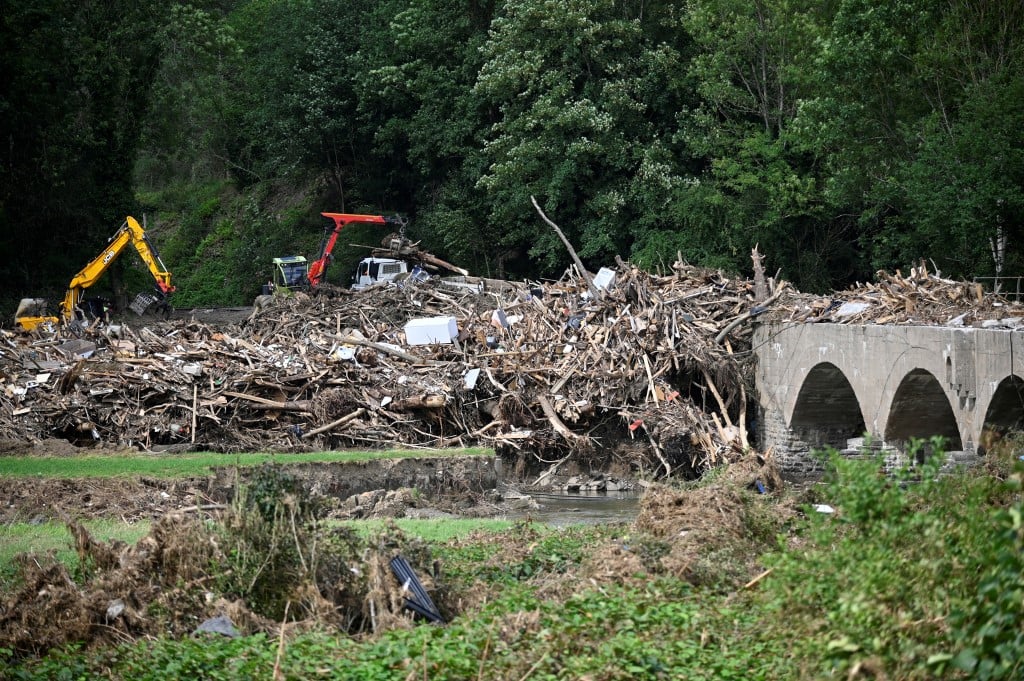 Front loaders work to move branches and uprooted trees near a bridge over the Ahr river in Insul, Ahrweiler district, western Germany, on July 28, 2021, weeks after heavy rain and floods caused major damage in the Ahr region. – At least 180 people died when severe floods pummelled western Germany over two days in mid-July, raising questions about whether enough was done to warn residents ahead of time. (Photo by Sascha Schuermann / AFP)

A slow-moving, low-pressure system over Germany, meanwhile, broke the record in mid-July for the most rain dumped in a single day.

The downpour was nourished by another unprecedented weather extreme, surface water temperatures over part of the Baltic Sea more than 5C above average.

Flooding in Germany and Belgium caused by the heavy rain — made far more likely by climate change, according to peer-reviewed studies — killed scores and caused billions of euros in damage.

As the climate continues to warm, flooding on this scale will become more frequent, the EU climate monitor has warned.

“2021 was a year of extremes including the hottest summer in Europe, heatwaves in the Mediterranean, flooding and wind droughts in western Europe,” C3S director Carlo Buontempo said in a statement.

“This shows that the understanding of weather and climate extremes is becoming increasingly relevant for key sectors of society.” 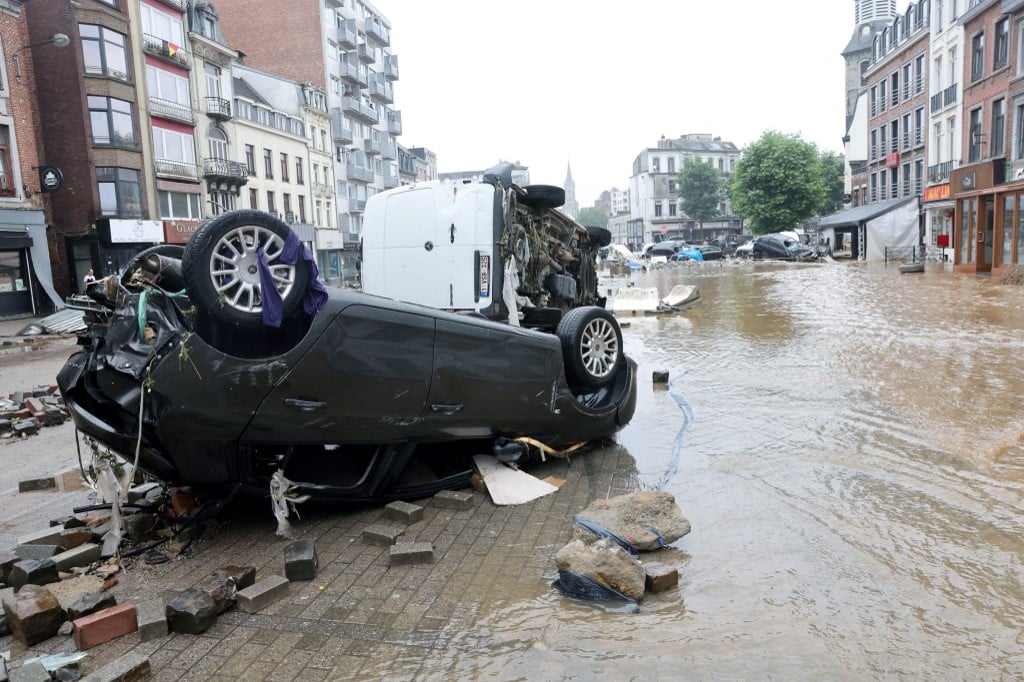 A picture taken on July 15, 2021 shows damaged cars on a flooded street in the Belgian city of Verviers, after heavy rains and floods lashed western Europe, killing at least two people in Belgium. (Photo by François WALSCHAERTS / AFP)

‘Running out of time’

The annual report, in its fifth edition, also detailed weather extremes in the Arctic, which has warmed 3C above the 19th-century benchmark — nearly three times the global average.

Greenland’s ice sheet — which along with the West Antarctic ice sheet has become the main driver of sea level rise — shed some 400 billion tonnes in mass in 2021.

The pace at which the world’s ice sheets are disintegrating has accelerated more than three-fold in the last 30 years.

“Scientific experts like the IPCC have warned us we are running out of time to limit global warming to 1.5C,” said Mauro Facchini, head of Earth observation at the European Commission’s Directorate-General for Defence Industry and Space, referring to the UN’s science advisory panel.

“This report stresses the urgent necessity to act as climate-related extreme events are already occurring.”

On Wednesday, Allain Bougrain-Dubourg, head of the League for the Protection of Birds (LPO), said he would write to President Emmanuel Macron that “the time has come to do our utmost to save dolphins from mistreatment or even extinction.

“This dramatic situation is even less acceptable given that it is avoidable,” Bougrain-Dubourg added.

Pro-dolphin activists say harmful fishing activities, including deep-sea and sea-bed trawling, must be halted for several weeks in the Bay of Biscay between France and Spain.

The Pelagis ocean observatory has spotted a surge in dolphin deaths on the Atlantic coast, with 127 common dolphins washed up in January alone — up from 73 in the same month last year.

Increased dolphin deaths are usually seen later in the year, during their February-March coastal feeding season that brings them closer to fishing vessels chasing hake and sea bass.

This year the increase in finds is “especially early”, Pelagis said this month.

Scientists believe that more than 80 percent of dead dolphins sink or decompose at sea rather than washing ashore, suggesting the real number of deaths is far higher at up to 11,000 per year.

Of the washed-up dolphins, “most presented signs of being caught in fishing equipment”, Pelagis said, with the LPO singling out “slices in the tail fins and clear traces of nets” on their skin.

After two years of pressure from the European Commission and under the spotlight from activists, Paris has so far offered an eight-point plan with technical measures, stopping far short of an outright ban.

Measures include a voluntary observer scheme aboard fishing vessels, satellite tracking and fitting trawlers with cameras or acoustic repellent devices that drive the dolphins away.

Many fishing ships are already fitted with the devices in a “large-scale experiment” to test their effectiveness, the government said.

But the LPO denounced the government moves as “half-measures… that will change nothing and cost us precious time”.

Paris has not completely closed the door to temporary bans, suggesting “time- and space-limited closures” to fishing could be tested in the Bay of Biscay in winter 2024-25 “if there are no satisfactory results in reducing accidental catches” of dolphins.

That isn’t soon enough for the activists. Sea Shepherd have filed a criminal complaint on January 16th against persons unknown over the failure to intervene.