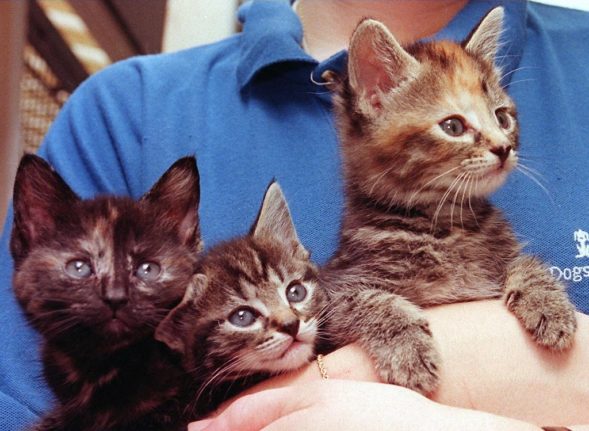 As part of her attempt to soften up her image, far-right leader Marine Le Pen has recently revealed that she spent at least part of lockdown studying for a certificate so that she could breed her beloved cats.

We only mention this because you, too, might need to take an exam if you’re a cat owner.

The Attestation de Connaissances pour les Animaux de compagnie d’espèces domestiques (ACACED ) is compulsory for anyone who wants a career in a range of professions that involve working with animals.

Obviously this is aimed at people who work in those sectors, but in some circumstances private individuals need one too.

The ACACED proves that the holder has acquired knowledge of nutrition and diseases specific to particular animals – there are different ones for cats and dogs –  as well as standards for livestock buildings.

Professions for which the qualification is necessary include dog and cat breeding, certain workers in shops and shelters, transit (paramedics / emergency carriers of pets), training, education and presentation of pets to the public (competitions etc), or pound management.

Dog walkers or groomers are not required to hold the document, while those who hold relevant qualifications – veterinarians, their assistants and dog handlers, for example – do not need to hold this licence separately.

It should be noted, a different and specific certificate of competence is required for anyone who wants to work with wild, non-domestic animals.

Any pet owner whose animals have more than one litter in a year is considered a breeder – even if you keep or give away the kittens, rather than sell them.

That means that they hold this document.

Once you have the qualification, you will need to attend a short refresher course every 10 years if you intend to keep breeding from your pets.

When you have just met someone and want to learn more about them, it’s normal to ask questions about their life and situation – but in France there is one subject that is somewhat taboo; money.

If the French will easily complain about how much they spent on gas or groceries or how much their rent is, they will rarely tell the exact price they pay. Instead, they prefer talking about their mental health or giving details about their sexual encounters.

This particular French habit is said to come from both Catholicism and peasant culture. The Bible tells us that “it is easier for a camel to go through the eye of a needle, than for a rich man to enter into the kingdom of God.” and the Church pushed people to believe money should be taboo. After all, greed is one of the Seven Deadly Sins.

In addition is the peasant theory; that you should hide your money otherwise people will get jealous and steal from you.

Whatever the reason, the French have a long history of keeping their income a secret.

Around the world, many people don’t mind sharing their salary but in France, it definitely is considered presumptuous.

I asked a few French people how they feel about money.  “I would feel ashamed to tell someone how much money I make, especially if it is less than them,” said Alexia, a Parisian salesperson, told me.

“Moreover, some people are afraid to negotiate their salary and might end up earning less than their colleagues doing the same job. This is mainly why I would not talk about money at work,” she said.

There is a real sense of prejudice because “people believe your salary reflects your education”, and “you would want to earn more than your friends, just for the pride,” explained Eleonore, a waitress.

Money is a private matter, she added, saying: “French people tend to deduce what you can and can’t have depending on how much you make a year, I would not want someone intruding on my privacy.”

One thing French people hate more than anything is showing off. There is a real contempt for the ‘nouveau riche‘, someone coming from the middle class whose fortune is newly acquired and considered unsophisticated.

Showing you are wealthy is not considered classy, the French tend to still associate money with refinement.

This is personified in ex president Nicolas Sarkozy, a man who enjoyed wealth and luxury and was nicknamed the ‘bling-bling president’ by French people who considered his enthusiasm for money unsophisticated.

Money is a real issue for the French, according to a January 2022 survey by Harris Interactive, money has already been the subject of disputes for 50 percent of them, most often within couples.

The same survey reveals that only 44 percent of people know the income of at least one of their friends, and they rather not ask the question.

So is the taboo around money changing with the generations?

In my experience people in their 20s – like me – still consider it rude to show off their wealth, especially with the energy and financial crisis going on, but they are not afraid of discussing salaries.

“I don’t mind telling someone how much I make, I know it is not much, but we all have money issues,’ Etan told me. However, he added: “My parents would never tell me if they have issues.”

But things are changing – the Church is not as influential as in the past, and people are not hiding their money under their mattress anymore. Moreover, the Covid crisis also seems to have encouraged the French to negotiate their salary: “I would never have negotiated my salary if I did not know that they needed people. It made me feel more confident about my income,” added Ethan.

Overall, the older generation still considers money a taboo in France, mainly because it is a tradition. The younger generation seems more open to discussing income – perhaps due to contact with other cultures and foreign people.

Ilana Levy is a bilingual freelance journalist living in Paris.

PARTNER CONTENT
Moving to France – how to zap the culture shock
JOBS
Coronavirus crisis in France: The battle to save the livelihoods of the self-employed
Url copied to clipboard!