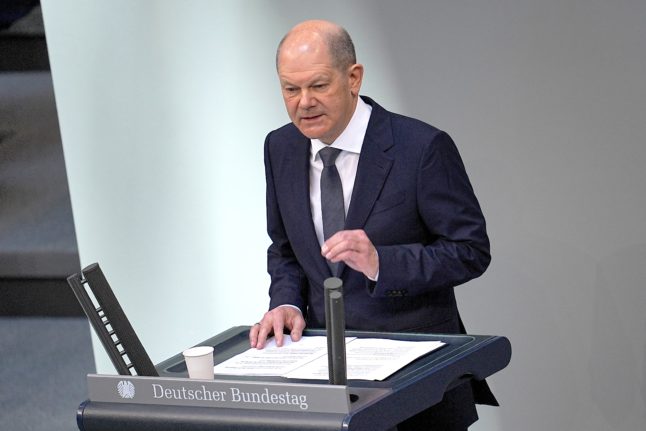 Scholz also said Russian President Vladimir Putin’s invasion of Ukraine had stalled despite the daily assaults inflicted by his troops, and urged Moscow to “immediately” stop the fighting.

“Putin’s offensive is stuck despite all the destruction that it is bringing day after day,” Scholz said in a speech to the German parliament during a series of debates on Wednesday.

Unprecedented sanctions imposed by Western partners are working and will only bring further damage to Russia’s economy, warned the German leader.

“But that is just the beginning, many of the toughest consequences will only been seen in the coming weeks,” he said, warning that “we are constantly creating sanctions.”

Putin “must hear the truth” that not only is the war destroying Ukraine, “but also Russia’s future”.

But Scholz said he would not endorse calls for NATO to help erect a no-fly zone over Ukraine or to send in “peacekeeping troops”.

“As difficult as it is, we will not give in on that,” he said, adding that Germany would not risk a direct military conflict between nuclear-armed Russia.

Scholz pledged to support refugees from Ukraine, although he acknowledged it would be a huge challenge.

“It is still completely unclear how many women, men and children from Ukraine will seek refuge with us. All we know is that there will be many,” said the Chancellor.

He added: “The refugees are welcome here with us.”

Scholz also said that stopping imports of Russian oil could not happen overnight, adding that if steps were taken too fast then Germany could see a recession and many people would lose their jobs.

“The sanctions should not hit the EU harder than the Russian leadership,” he said.

Scholz said, however, that people in Germany would receive financial support due to the rising energy prices.

In his address to the Bundestag, Scholz also said Germany would do everything possible to try and avoid a difficult Covid infection wave in autumn.

He said that due to all these challenges, solidarity was needed, including at NATO and EU levels.

“We will show the world that we stand together,” Scholz said.

“Freedom and democracy are suddenly not abstract concepts anymore, but things that must be defended.”

OPINION: Germany has been forced to learn the lessons from its post-war pacifism

Alongside the United States, Germany is “certainly making the largest contribution” to NATO, Scholz said in an interview with the ARD broadcaster.

Speaking at the close of a summit of leaders from the Group of Seven rich democracies, Scholz said Germany was in the process of creating “the largest conventional army within the NATO framework in Europe”.

He also promised to meet NATO’s target of spending two percent of GDP on defence, answering years of criticism from close allies that Berlin was failing to contribute enough to the alliance.

Russia’s invasion had led to a renewed conviction “that we should spend more money on defence”, Scholz said.

“We will spend an average of around 70 to 80 billion euros a year on defence over the next few years,” he said, meaning “Germany is the country that invests the most in this”.

Scholz’s announcement in February was seen as a major policy shift, upending Germany’s traditionally cautious approach to defence as a result of its post-war guilt.

NATO allies are from Tuesday gathering in Madrid for a summit, where the United States is expected to announce new long-term military deployments across Europe.