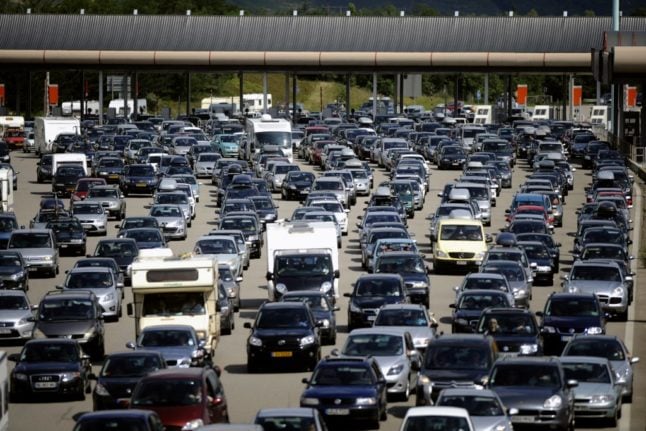 In France, the summer holidays are nigh – schools break up for the grandes vacances on Thursday, July 7th – which means the roads will get busy in the days and weeks to come as people escape to the seaside by the carload.

And with flight cancellations, strikes and other disruptions expected at French and European airports this summer — not to mention soaring air fares — many are opting to drive to their holiday destinations despite the cost of petrol.

Each year, France’s roads watchdog Bison Futé publishes a road traffic calendar, which lists the times of the year when travel can be particularly bad. Unsurprisingly, the summer holidays are among the heaviest travel periods, as French and foreign holidaymakers head for the sun.

It operates four levels of travel status, which are colour-coded.

On ‘black travel’ days, Bison Futé has calculated that the combined length of all traffic jams on France’s roads could stretch a total of more than 1,000km – or the length of the country from north to south.

We’ll issue regular travel updates, like this one, throughout the summer. But for July and August, the roads monitor forecasts five black travel days, on July 9th, 23rd, and 30th, and August 6th and 13th – all Saturdays.

Only one of those days – July 30th – is graded ‘black’ for the whole of the country. That day is the notorious “chassé croisé” when traditional July holidaymakers head home, and the first of the August breakers set off on their holidays.

The other ‘black days’ are for certain areas, identified by number according to the geographical area where traffic will be heaviest. The areas correspond to the numbers shown on the following graphic.

The busiest routes of the summer are those that lead to the coasts of the Mediterranean and the Atlantic Ocean – notably the southwest of the country, though Brittany and Normandy are also always popular. Bison Futé even highlights the direction of travel in which traffic will be heaviest – using Départs to describe travel away from main cities, such as Paris, to popular resorts, and Retours for travel away from resorts and back to the cities.

So, on July 30th, the heaviest traffic will be heading to holiday resorts, hence the black ‘extremely difficult’ code. Travel back to the cities in comparison will be classed as ‘red’ – merely ‘very difficult’.

Any route will get busy as it passes large towns or major cities, and at the toll booth entry and exit points of France’s motorways.

READ ALSO Driving in France: What is télépéage and how does it work?

Delaying your departure outside peak periods is frequently the best solution, and Bison Futé offers daily updates on the travel situation on arterial routes across France, including travel times to avoid.

These are consistently difficult stretches of French roads in the summer, but it depends on which way the traffic is heading – whether people are leaving the big cities or returning to them after holiday.

Avoid these routes if you can, especially at peak travel times, for a holiday roadtrip that’s less fraught. For example, instead of braving the A10 around Tours, perhaps consider taking the A71, A20 and A89 to bypass the area altogether.

And the most obvious plan to escape the worst of the traffic – don’t travel on a weekend if you don’t need to.

READ ALSO ‘Something always goes wrong’: What I learned taking the train through Europe with two kids