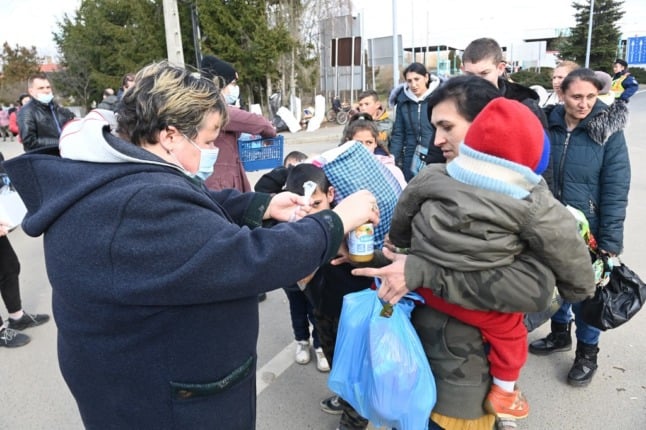 A woman gives food to a woman carrying a child after Ukrainian refugees crossed the Ukrainian-Hungarian border in Tiszabecs, Hungary, on February 27, 2022. - Tens of thousands of Ukrainians have fled their country since Russia invaded on February 24, 2022. The United Nations' refugee agency, UNHCR, says it is planning to deal with up to four million if the situation worsens. (Photo by Attila KISBENEDEK / AFP)

The number of refugees to enter Europe from Ukraine could reach around four million, the EU announced at a news conference in Brussels.

After interior ministers gathered for a special meeting of EU member states to discuss the crisis, leaders indicated that the need to intervene was becoming increasingly urgent.

“We are witnessing what could become the largest humanitarian crisis on our European continent in many, many years. The needs are growing as we speak,” said Janez Lenarcic, European Commissioner for Humanitarian Aid and Crisis Management.

OPINION: This is Russia’s war, but we Europeans need to learn fast from our mistakes

He said the number of Ukrainians affected by the conflict in humanitarian terms could be 18 million within Ukraine itself, while seven million people are at risk of being internally displaced and four million could flee the country as refugees.

That’s a figure also echoed by the UN refugee agency.

More than 368,000 refugees, mainly women and children, have fled Ukraine into neighbouring countries so far based on data from national authorities, the agency said on Sunday.
A large number of those escaping have crossed over into Poland, where the authorities have counted some 156,000 crossing since the invasion started early Thursday. 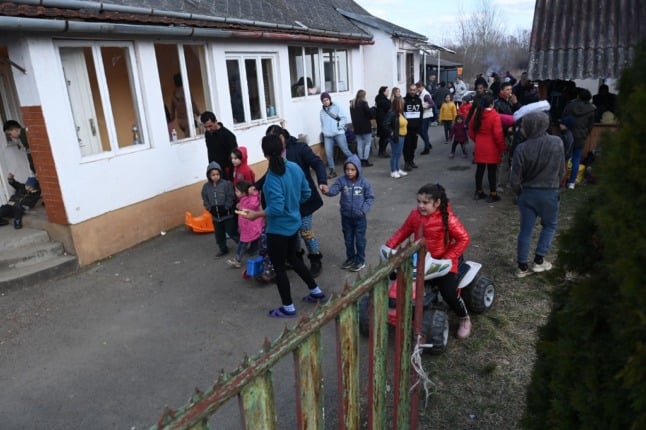 Romani people fleeing Ukraine arrive at facilities of the local Roma community after Ukrainian refugees crossed the Ukrainian-Hungarian border in Tiszabecs, Hungary, on February 27, 2022. (Photo by Attila KISBENEDEK / AFP)
Border guards counted some 77,300 arrivals from Ukraine on Saturday alone. The refugees have arrived in cars, in packed trains and even on foot.
Germany’s rail operator said it will offer free train rides from Sunday to Ukrainian refugees travelling into the country from Poland.
Up to six trains are running daily from Poland to Germany at the moment, Deutsche Bahn said, but it was preparing to increase that capacity “at short notice”.
Also on Sunday neighbouring Austria announced that its state railway company OeBB would offer free travel to those escaping the conflict.
Austrian Transport Minister Leonore Gewessler said in a tweet that she had agreed with OeBB that “Ukrainians who are fleeing will be able to use OeBB trains without tickets”.
“In these times it is important to help quickly and simply. That it exactly what we are doing,” she said.
Meanwhile, Italy is receiving its first refugees, Italian broadcaster Rainews reports.
Around fifty people made their way by bus, mainly women and children, as their husbands are said to be in Ukraine to fight.
After arriving at the Fernetti border in Trieste, police forces and guards carried out the border controls.
They are reportedly heading to friends’ or acquaintances’ homes, mainly in the north of Italy between Brescia, Vicenza and Milan. Some are also going to Rome.
Some 236,000 Ukrainians have residence in Italy – around 80 percent of those women, according to data from Italy’s national Institute of Statistics (ISTAT).

“We are ensuring the complete filling of our storage capacities, aiming to be close to 100 percent by early autumn,” and France will also build a new floating methane terminal to receive more energy supplies by ship, Borne said.

France is much less dependant on Russian gas than its neighbours, and announced earlier this week that it has not received any Russian gas by pipeline since June 15th.

Meanwhile Germany moved closer to rationing natural gas on Thursday as it raised the alert level under an emergency plan after Russia slashed supplies to the country.

French PM Borne on Thursday also confirmed that the bouclier tarifaire (price shield) will remain in pace until the end of 2022 – this freezes the price of household gas and limits rises in electricity bills for homes to four percent.