A screenshot from a new documentary about Angela Merkel. Photo: picture alliance/dpa/ARTE | --

Merkel, who left politics in December after 16 years at the helm of Europe’s top economy, said she was watching the “attack on the territorial integrity and sovereignty” of Ukraine “with great concern and sympathy”.

“Russia’s war of aggression marks a profound turning point in European history after the end of the Cold War,” she said in a statement.

Merkel said there was “no justification” for this “blatant violation of international law” which she “condemned in the strongest terms”.

She offered her “solidarity” to the people and government of Ukraine and her “full support” to her successor, Olaf Scholz, in his efforts with Western partners to “stop President (Vladimir) Putin as quickly as possible”.

Merkel’s decision to maintain close diplomatic and economic ties with Russia despite years of provocations has been criticised as “naive” in recent days as Putin has laid bare his intentions in Ukraine.

Scholz this week announced plans to halt the Nord Stream 2 pipeline project to bring Russian natural gas to Germany as a sanction against Moscow.

READ ALSO: OPINION: Germany has scuppered Nord Stream 2 but there are questions left to answer

Merkel had long championed the project as crucial to Germany’s energy strategy as it phases out nuclear power and coal and gradually builds up its supply from renewables.

Her own predecessor as chancellor, Gerhard Schroeder, has worked since leaving office in 2005 as a lobbyist for the Russian energy sector — a target of fierce criticism in Berlin.

Russian gas lobbyist & former German Chancellor Gerhard Schroeder calls for restraint in the use of sanctions against Russia, saying this could endanger a return to peace and dialogue. Really pic.twitter.com/ex1B1xV5lq

He criticised Russia’s invasion of Ukraine on Thursday as unjustified but called for maintaining “political, economic and civil society ties” with Moscow.

READ ALSO: EXPLAINED: How the Ukraine crisis could impact Germany 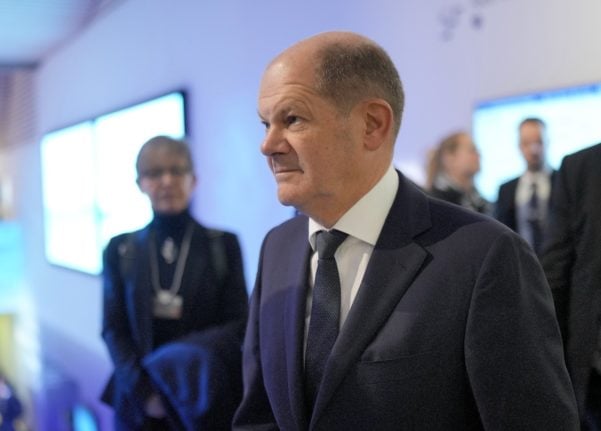 “We are supporting Ukraine not to lose this war, to win it against Russia,” Pistorius said in an interview with the broadcaster ZDF.

“And to that end, Germany is doing more than practically any other ally except the US,” he said.

Asked when Germany was planning to make a decision on German-made Leopard tanks long sought by Kyiv, Pistorius said it was not up to him.

“This decision will be made in the chancellery,” he said.

He also defended Chancellor Olaf Scholz against accusations of dithering on whether to approve the delivery of Leopards.

“Taking the lead does not mean blindly going ahead,” he said. “And if the decision takes another day or two, then that’s just the way it is,” he said.

Pistorius took office last week at a crucial time for the German defence ministry as the country faces intense international pressure to endorse the
delivery of Leopard tanks.

While scores of nations have pledged military hardware, Kyiv is clamouring for the more powerful Leopard — seen as key to punching through enemy lines.

The tanks are used by several EU nations, but these countries require Berlin’s permission to send the German-made armaments on to Ukraine under Germany’s war weapons control act.

READ ALSO: Leopard 2: What is the German tank long sought by Ukraine?

Poland on Monday upped the pressure on Berlin by saying it would be prepared to go ahead and deliver the tanks without permission.

But Pistorius, who will meet NATO Secretary General Jens Stoltenberg in Berlin later on Tuesday, insisted there was no division among Ukraine’s Western allies.

Observers would be “well advised not to wantonly conjure up this supposed division within NATO”, he said.