Part of what makes Stockholm such a thriving and influential international startup hub is the support that the City of Stockholm offers to entrepreneurs who have ideas that can have a positive impact on its citizens, ideas that will improve their lives.

Take the Stockholm Innovation Scholarship, for example. Every year, the City of Stockholm asks a panel of experts to sift through hundreds of applications to select the top innovations in five categories: Simplify Everyday Life, Creative Industries, Life Science and Health, Travel and Tourism, and Social Impact and Sustainability. The winner of each category receives 100,000 kronor.

A masterclass in sustainability

The Social Impact and Sustainability scholarship winner, Sopköket, is a startup that salvages leftover ingredients from grocery stores to prepare a variety of global dishes. Sopköket’s gradual growth from being a mobile food truck in 2015 to being a viable restaurant and frozen food business, exemplifies the importance of the City of Stockholm’s support to entrepreneurs who want to make people’s lives better.

“We have had a lot of support from Stockholm municipality,” says Filip Lundin, Sopköket’s founder and CEO. “Our growth has been organic, but we have survived thanks to grants from public bodies and prize money from the city.”

Find out why Stockholm, with the most unicorns per capita outside of Silicon Valley, is a great city for entrepreneurs

Lundin’s company is remarkable in that it not only offers a masterclass in sustainability and circular economy but also adheres to an inclusive and generous recruitment policy – many of Sopköket’s staff were previously long-term unemployed.

“We like to create jobs for people that are from difficult backgrounds or marginalised groups,” says Lundin. “That’s one of our three main objectives. There’s also the rescued ingredients – we have as a goal to have at least 50 percent rescued food per meal, and so far we’ve rescued 35 tons of food. And then we also give food to people in need. We have given away 27,000 meals since 2015.”

And from this spring, Sopköket will be not only selling food in its Södermalm restaurant, but also in frozen food sections in supermarkets and from its own e-shop.

Lundin says Sopköket was inspired by his Indian heritage. “My dad is half Indian so I have a huge family in India. We have always cooked at home in Stockholm – we never ate ready-made meals. I’ve also had a strong entrepreneurial mindset since I was a kid and an interest in sustainability issues – with Sopköket, I get to combine these two!” 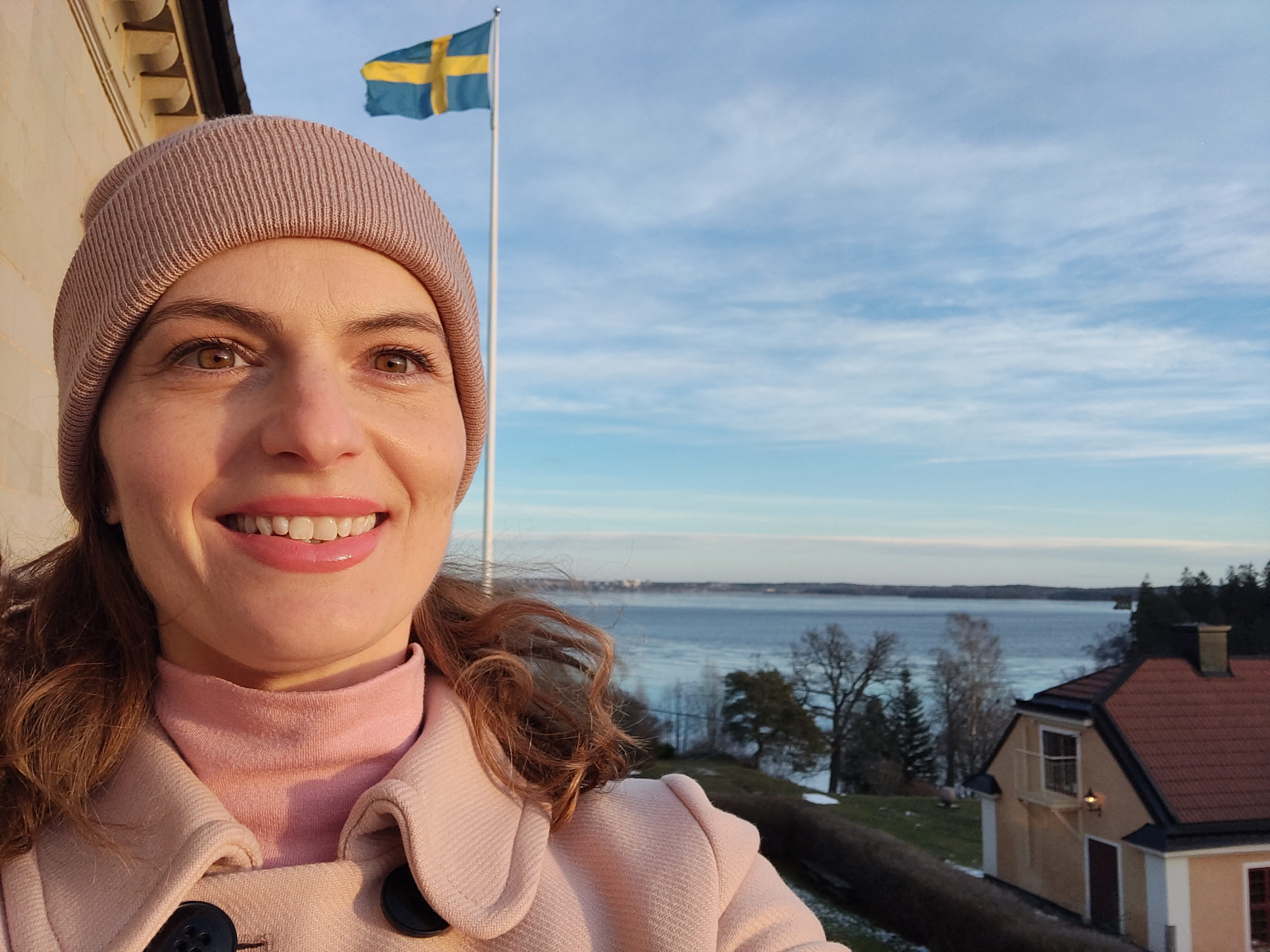 Stephanie Mazzotta, creator of Hidden Gems
An innovation with heart

“It’s a data-driven web platform that allows users to set up filters,” says Stephanie, an Italian-Australian who’s lived in Stockholm since 2018 and worked in tech for 20 years. “We call it an intelligent exploration guide for something new to see or do without having to endure crowds. It enables people to find off-the-beaten-track places and activities in the Stockholm area without having to spend hours searching online.”

Hidden Gems, which will launch in the Spring, aims to highlight lesser known attractions and areas of interest away from the centre of Stockholm but if there are times when the more famous city centre attractions are quieter, it will also alert the user.

“People are still cautious about going out, so many places in Stockholm that have usually been busy are still totally quiet. So we wanted to provide a guide for people to assess how crowded or how quiet a place would be.”

But, as with Sopköket, this innovation has heart. Stephanie also wants her innovation to provide the vulnerable and people with disabilities with more opportunities to get out.

“Mobility inequality has really been exacerbated by the pandemic. The main obstacles for those with restricted mobility are crowding on public transport and whether or not amenities at the end destination are available to them. Will there be a ramp and suitable bathroom facilities? We want to give people with disabilities the option to travel to places they’ve not been able to before – and also new options that they never knew existed.”

Stockholm is ‘way ahead’

As with Filip, Stephanie says she owes a debt of gratitude to Stockholm. “Stockholm is way ahead of many other cities, especially in terms of encouraging international women and providing a really supportive ecosystem in which for women to work.”

But Stephanie also underlines the importance of civic support for innovations that aim to help people. “Grants from public bodies are really important for the early stages of social innovations, to give them time to show results and come up with new revenue streams.”


Interested in starting your own venture in Stockholm or moving your business here?  Check out these guides to set up a business and learn what locals have to say about life in Stockholm.

Erez Ofer and his wife Stephanie started their food truck family business, now called Falafel Stockholm, in 2014, hoping to recreate the hummus, falafel rolls, and fresh salads they had enjoyed while living and studying in Tel Aviv.

From the start, their food truck has been a hit, catering for conferences for companies like H&M and Björn Börg, and big events like Stockholm Pride, and even being featured in an advert for the accounting software company Visma.

But the onset of the coronavirus pandemic meant they had to rapidly change their business model.

“We barely had any catering or events, so we had to work our asses off with the food truck,” Erez says.

“We had to have the truck open for lunch and dinner every day, in different parts of the city, all over, because you’re only allowed four hours in the same spot, and we were able to have only a seven percent reduction in summer sales compared to the year before, which I’m really proud of.”

What he didn’t realise is that all of this extra work would turn out to be counterproductive due to the increased costs it required and the criteria for receiving government support.

In order to receive support under the Swedish government’s coronavirus business support programme, called ‘omställningsstöd’ or ‘adjustment/transition support’, a business needs to show a minimum drop of 40 percent in sales.

The problem was that in order to keep sales steady, the business has significantly ramped up its costs, pushing it into a net loss.

As a result, the company expects to make a loss of about 300,000 kronor this year on 1.5 million kronor in sales.

It was only at the start of March 2021, after waiting more than six months to be able to send in a request for Omställningsstöd for August to October 2020, that he learned that his business would not qualify. The Swedish Tax Agency has been directed to only consider sales reductions of 40 percent when considering the economic impact of coronavirus on a business.

This is not the only way that Falafel Stockholm has fallen through the gaps. To be able to take the food truck out daily, he and his wife have hired more staff. But he can’t get help paying employees’ wages under the korttidspermittering (short-term lay-offs) system, which allows employers to temporarily get the government to supply up to 60 percent of employees’ salaries, if their working hours are reduced.

“Based on their policy, if you’re able to hire new people, then you don’t need korttidspermittering and they’re not thinking that sometimes as a business, you need to grow in order to be able to survive.”

“If you’re only looking at the sales, it doesn’t tell the whole picture of what’s going on in the business, and it’s not just us, there are a lot of other businesses that are having similar problems.”

But despite contacting authorities to explain the situation, he said he has only received a standardized answer to his letter that he did not find helpful.

Eva Bodén, an advisor at the Swedish Tax Agency, said that Erez is not alone in his frustration at not qualifying support.

“There are a lot of others who think they are losing out because of the way this has been set up,” she said, adding that many businesses had also seen their support reduced when the rules changes in July after a decision by the European Commission.

“It’s always the case that when you bring in a law that there are some people who don’t benefit.”

She said that many restaurants, which have seen revenues fall after they were stopped from selling alcohol in the evening, and then closed after 8.30pm, were likely to qualify. The Vegan Schmegan truck, as it was previously called, at the Matholmen food festival in Stockholm. Photo: Falafel Stockholm

In January, before learning that they would not be eligible for omställningsstöd, after seven years searching and with the help of investors, Erez and Stephanie opened their first restaurant in the Vasastan district of Stockholm.

Despite great reviews and an enthusiastic reception from the couple’s regular customers, the restaurant’s sales are being depressed by the pandemic.

“I’d say, it’s probably on average about 5,000 or 6,000 kronor a day, which is not enough to get by,” Erez says. “Considering our costs, we need around 7,000 or 8,000 minimum per day, which I think is a very reasonable expectation. I’m not in this to be greedy or get filthy rich. I’m doing this because it’s something I feel passionate about, fresh homemade food.”

However, even this extra money means that their business will not qualify for omställningsstöd for all of the coming year, despite shouldering heavy start-up costs. The couple say this is basically a death sentence to the business.

Right now, Erez, Stephanie and their five children are going deeper and deeper in debt to keep the business going.

“We can’t afford to pay taxes, so we are having to go into debt and take a loan from the tax authorities, and we’re going to have to take another loan from ALMI (Sweden’s state-owned bank for small business startups) to help us get through this as well.

“But you know, there’s personal liability for these loans, and also there’s an interest that needs to be paid. It’s really tough, we have paid our taxes for years, we and all of the other small businesses in similar situations have gotten royally screwed.”