What kinds of tech do you find help you the most with your international lifestyle? And which of the following would it make sense for you to try out in 2022?

Carrying cash and bank cards with you at all times is less and less attractive – and particularly if you spend a lot of time away from your home country. Virtual cards aren’t cards at all in the physical sense – they exist only on your phone (phew, no plastic required!). Once you’ve signed up for a virtual card, you can simply store it in your banking or e-wallet app.

They do still have a card number, an expiration date, and a security code, so they work just like a regular card (and you can also get virtual credit cards with spending limits).

They’re easy to use for online payments and may be linked to Apple or Google Pay to make in-store purchases where contactless payments are accepted.

Losing a physical bank card can be a nightmare – especially if you have a language barrier to deal with. Lost your password for a virtual card? You’ll be able to recover or reset it within minutes, while you should also be able to lock the card from your phone at any time.

When we asked The Local’s readers in Germany and Sweden about the best tech solutions for international living, a huge number cited translation apps and tools. Whether you’re a complete newcomer or you’ve settled in and begun learning the language but need a translator for more complex tasks, these solutions can be a lifeline.

Scared to ask a passerby for directions? Terrified of another blank look from a puzzled official behind a counter? Just type in or say the word in English (or your native language) and get an instant stress-relieving translation.

Kara Beller, originally from California but living in Hamburg since May 2020, summed up how many of you feel about translation apps: “I would be dead without them!”

While Google Translate is obviously the best-known service, it’s not without flaws and there are a wide range of options you could try. Are you looking for the top tool for just one language? Or do you live in a country (or lead a life) where you’re befuddled by several different languages? Many apps cover dozens of leading languages but searching for a specialist locally-invented tool could hold more value for some of you.

While some futurologists have predicted the death of voice communication, people continue to talk to each other on the phone. If you live an international life, phone calls may be vital for staying in touch with family, dealing with admin tasks back home, or running a business. These are some of the reasons for setting up a virtual phone number (a number that’s not fixed to a specific device or phone line and can forward incoming calls to another phone or device).

Many international people find it helpful to keep a virtual phone number from back home – such as non-Europeans living in Europe who can face steep charges for long-distance calls that cannot be done via services like WhatsApp, such as those with a bank.

Nayane Smith, a Brazilian reader of The Local who lives in Sweden, says she began using a virtual phone number for better communication “with my family, as well as with the new contact network here”.

With a virtual phone number from Zadarma, you pay as little as €1.60 per month to make the number yours and all incoming calls are free. Subscribers include small business owners wanting to expand their geographical presence, personal users and even an airline call centre. If you’re not ready to make a long-term commitment, you don’t need to worry as there’s no minimum contract term (three-month minimum to include SMS services).

Find out more about Zadarma’s virtual phone numbers – more than 30,000 numbers are available in 100 countries globally Virtual numbers can help you with your work and personal life. Photo: Getty Images

Video consultations with doctors have become increasingly accessible in many countries in recent years. The chance to speak with a medical expert in English (or perhaps another preferred language) and effectively face-to-face just by picking up your smartphone holds obvious appeal.

If you have a busy life and you’re not fluent in the local language, such services – some of which are also available at all hours – could really make things easier for you. That would have been true even pre-pandemic, but is clearly even more the case now as Covid-19 continues to affect our daily lives.

If you’re new to a country or planning a move, why not search for the best options whether through public or private healthcare services and work out exactly what you can expect (from advice to diagnoses to prescriptions and perhaps even policies on personal data)?

We’re well into the 2020s and you really don’t want to be burdened with bundles of printed documents or a slow, overloaded laptop or phone. Cloud storage continues to evolve and is favoured by many people who live abroad.

It’s a great option as a business tool, as well as for storing and organising the huge number of photos you take with your smartphone. But a cloud service also offers a single, secure location in which to save important personal documents you may need again in the not-too-distant future.

Need a photo of your passport or a copy of your birth certificate? Store them in the cloud, so you can access them whenever you’re online while freeing up space on your devices.

Want to make your international life easier? Discover Zadarma’s virtual phone numbers, available for a monthly fee of as little as €1.60. Ready to sign up? Register here

Whether you’re totally new to Milan or have been living in the northern city for a while but are still finding it hard to adapt to the milanese lifestyle, there are some mobile apps that are guaranteed to make daily life easier.

In no particular order, here are six of the most useful apps for navigating life in Milan.

Public transport in Milan is efficient and reliable, with a dense network of trams, buses and metro lines servicing the city’s entire urban area. But, figuring out the best way to get to your chosen destination might not be so easy, especially if you’ve just moved to the city.

READ ALSO: What are the best Milan neighbourhoods for international residents?

The app will work out the quickest way to get to your destination, giving you all the relevant info regarding your journey as well as keeping you posted on potential delays or service suspensions on your route.

You can buy single tickets or manage your daily or monthly passes directly on the app. The app can be downloaded here.

Car-sharing services have become increasingly popular in Milan over the past few years and Car2Go is the most reliable provider in town.

Hiring a car through Car2Go’s app, SHARE NOW, is as easy as it gets: once you have uploaded your driving licence directly to the app, you’ll only need to locate a car in your area and book it with just a couple of taps on your screen.

There are five types of car available to users (you can see them here) and the operational zone has been recently extended to encompass some extra-urban areas (Baggio, Linate, San Donato and others). 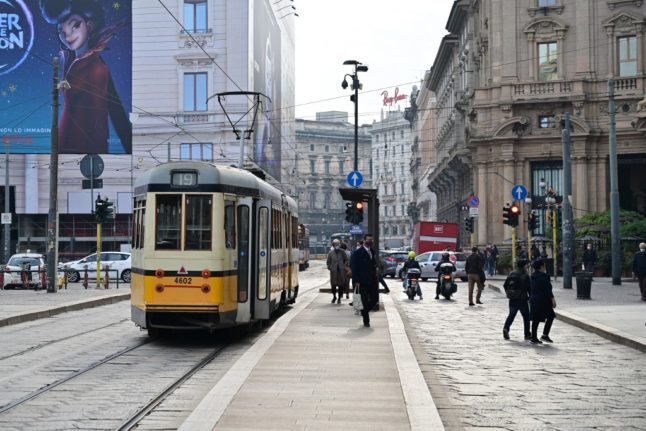 Public transport in Milan is very efficient but a number of car- and bike-sharing services are also available. Photo by Miguel MEDINA / AFP

Rates go from six to eight euros an hour and parking within the urban area is free. Further info and app download links are available here.

If you’re not a fan of cars (or simply can’t stand traffic during peak hours), you’ll also have the option to quickly hop on a bike and cycle your way through the city.

There are countless bike-sharing services available to Milan residents but the BikeMi app is probably the most reliable one.

There are as many as 325 BikeMi stations scattered across the city, with nearly 5,500 between regular bikes and e-bikes being available to users.

BikeMi is also fairly cheap (around two euros an hour for regular bikes), though subscription to the service comes at a fee. The app can be downloaded here.

Milan truly has no shortage of eateries and, as a resident, you’ll likely be dining out at least once a week.

But managing bookings over the phone can be a bit of a hassle at times, especially if you’re not very proficient in Italian.

READ ALSO: Five things you’ll only know if you live in Milan

The Fork app allows you to book a table at your favourite restaurant directly from your phone.

Boking through The Fork also gives you access to a number of generous discounts (20, 30 or even 50 percent) on your restaurant bill. You can download the app here.

Online food delivery service Glovo is a popular choice among hungry Milanese who don’t feel like going out.

Glovo services an extensive network of restaurants across the city and deliveries are usually bang on time.

READ ALSO: Moving to Italy: How much does it really cost to live in Milan?

Aside from delivering food orders, the service will also bring anything from groceries to medicine to flowers right to your doorstep. 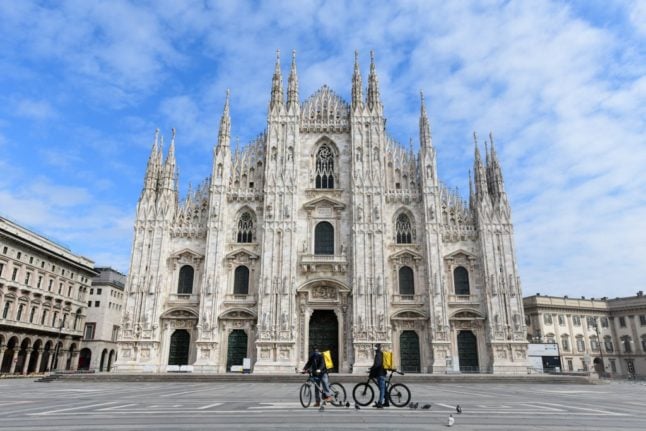 Glovo is the most reliable food delivery service in Milan. Photo by Piero CRUCIATTI / AFP

Milan is the Italian capital of padel, a racket sport which is in many ways similar to tennis, with the main difference being that a padel court is enclosed by walls and balls can be played off them.

Though you might not think much of it based on the above description, padel is a lot of fun and, besides keeping you fit, it’ll give you a chance to socialise with locals.

The best way to get involved is through the Playtomic app. 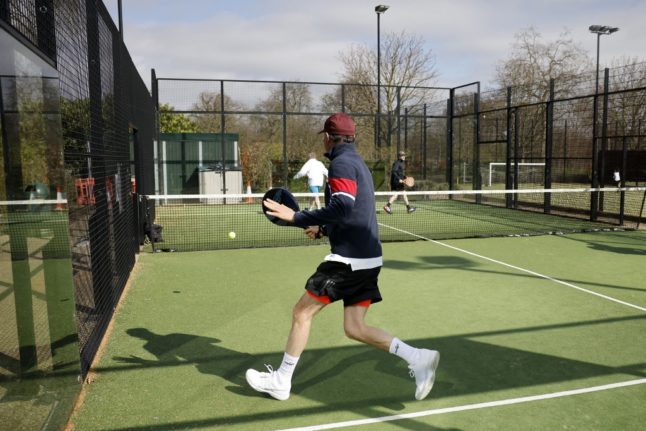 Playing padel is one of the best ways to make new friends in Milan. Photo by Tolga AKMEN / AFP

Far from being just a court-booking app, Playtomic gives users a chance to connect with other players, track their personal progress through match data and sign up for city-wide tournaments.

If you’re a bit of a party animal and like to get home late on weekends, you might find yourself in need of a taxi at some point.

Now, Uber is available in Milan but it is far more expensive than in other major European cities. As such, your best bet would be to order a local taxi through AppTaxi.

Booking is easy and the app accepts a variety of payment methods.