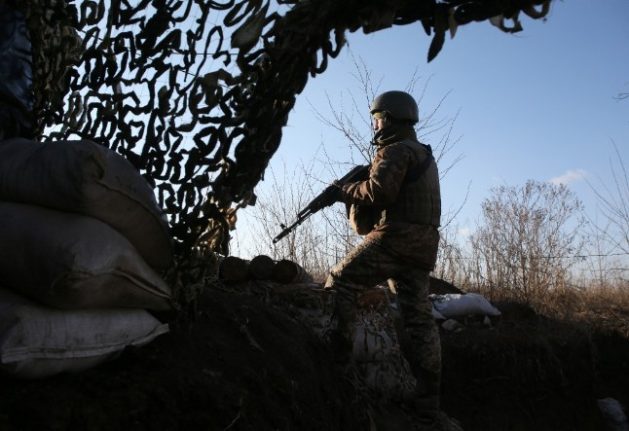 A Ukrainian soldier keeps watch at a position on the frontline with Russia-backed separatists not far from Gorlivka, Donetsk region. Photo: Anatolii Stepanov/AFP

The two leaders spoke for more than an hour on Friday morning during a call that was described by the French side as “serious and respectful” which highlighted “fundamental differences” but also a “joint desire” to keep talking.

The conversation “enabled us to agree on the need for a de-escalation,” the aide said during a briefing with journalists.

France hosted more than eight hours of talks between Russian and Ukrainian delegations in Paris on Wednesday which were seen as a test of whether Putin wanted to lower tensions, having massed around 100,000 troops on Ukraine’s border.

“President Putin expressed no offensive plans and said he wanted to continue the talks with France and our allies,” the French official said on Friday, adding that the Russian leader “said very clearly that he did not want confrontation.”

Macron said earlier this week that Russia was behaving as a “power of disequilibrium” in the region but had also made clear he wanted to speak with Putin, whom he invited to France for talks during his summer holidays in 2019.

His relatively conciliatory tone has contrasted with the more strident rhetoric about the probability of a Russian invasion from France’s NATO allies the UK and United States.

“Now the ball is in Putin’s court,” Foreign Minister Jean-Yves Le Drian told RTL radio Friday before the phone call between the leaders. “Does he want to be the one to say that Russia is a power of disequilibrium, or is he ready to show de-escalation?” he asked.

Le Drian said that there was “of course” still the risk of a Russian invasion of Ukraine, warning that such a move would have “massive repercussions” for Moscow.

The president reaffirmed “France’s full solidarity with Ukraine” and stressed the nation’s “determination to preserve the territorial integrity and sovereignty of this country, in a context of high volatility”, the Elysee said.

“The two presidents agreed to continue efforts in favour of de-escalation and dialogue,” it added.

He accepted that the hung parliament elected last Sunday reflected “deep divisions” in the country. He said that France  must “learn to govern differently…We must build new compromises…based on dialogue, open-mindedness and respect”.

But he failed to admit any share of responsibility in the impasse which voters have created. He said that he still had a “clear mandate” from his Presidential victory in April. He called for compromise but said that some of his own promises – no new taxes, no increased debt – were untouchable.

Hear more analysis from John and The Local team in our Talking France podcast.

In April, Macron acknowledged that he had won partly through the votes of people who disliked him but feared Marine Le Pen more. He promised to govern with them in mind. He hasn’t.

His alliance drifted through the parliamentary campaign without strongly defending Macron’s presidential programme, let alone coming up with new ideas to appease the voters, of Right or Left, who supported him on April 24th by default.

That is not the only reason for the mess that France is now in. Other factors played a part: voter fatigue; inflation; the perpetual French instinct to demand “change” but resist all changes; a campaign which largely ignored the gathering threats in the world outside.

France now finds itself, by accident, in a world which the present generation of French politicians have never known – a German, Italian, Spanish or Belgian world of coalitions, compromise and shifting alliances.

This was the world – a world of revolving-door governments –  which Charles de Gaulle devised the Presidency-dominated Fifth Republic to replace. Some argue that the return of parliamentary power will be A Good Thing.

It will generate more profound political debate and a culture of constructive compromise. I doubt it. The new National Assembly – with nine political groups, including large blocs from the Hard Left and Far Right – will be more bear-pit than Periclean Athens.

There has been a witch-hunt going on in the French media about who is “responsible” for the fact that Marine Le Pen’s Rassemblement National leaped from 8 seats to 89 in the new Assembly.

READ ALSO Is there really a ‘voter surge’ to the far-right in France?

The Left, both in France and abroad, has blamed President Macron’s Ensemble! alliance for failing to give clear advice to its supporters last Sunday to vote for the Left in two-way, second round contests with Lepennist candidates. As a result, they say Le Pen won at least 30 seats which might have gone to the Left-Green alliance, Nupes.

They fail to point out – and the French media has only belatedly started to point out – that exactly the same thing happened, only more so, with those Left voters who faced second round races between Macron and Le Pen candidates. Almost 60 percent of the Far Right victories – 53 – came in two-way contests  between the Rassemblement National and Macron’s Ensemble! alliance.

Exit polls vary but all of them suggest that voters of the Left  abstained, or even voted for Le Pen candidates, to “screw Macron” more than Macron voters abstained or voted Le Pen to “screw” the Left.

In effect, the Macron alliance and the Left-Green alliance shot themselves collectively in the feet by abandoning the so-called Republican Front against Le Pen. Each might have won at least 30 extra seats if both had voted for one another. The Macron alliance might even have just scraped a majority – which is presumably what Left-Green voters wanted to prevent.

A similar hue and cry is in progress against the Macron camp for its alleged willingness to work with Le Pen and her deputies in the new parliament. There has been some loose talk by some Macron allies. Most senior Macron lieutenants have ruled out deals or alliances with the Far Right bloc.

But what of Macron himself, who asked Marine Le Pen when they met on Tuesday whether she would contemplate joining a government of national unity? He asked the same of most of the party-leaders he met.

All refused and as Macron said in his eight-minute address, the idea is impractical and unjustified.

Why raise it at all then? Especially with Le Pen?

Partly, I think, because Macron believes that as President of the Republic he cannot pretend that the 89 Far Right deputies do not exist. Partly, I believe that Macron is playing a would-be clever waiting game.

He sees no real prospect of a long-term alliance with the 64 centre-right deputies. He expects in the short term to conduct  urgent business – including a new anti-inflation package  -through ad hoc alliances with the centre-right and moderate Left.

In the longer term, he believes (and maybe hopes) that such cooperation is doomed to fail. He wants to be seen to have given all combinations of parliamentary peace a chance before he “declares war” and calls a new legislative election next year.

Hence last night’s message. What are all the groups in parliament – including the three Macron-supporting ones – prepared to concede to allow the vital business of government to continue?

It might have been smarter politics if Macron had said, more clearly, that he also is ready to make concessions and listen to other people’s ideas.