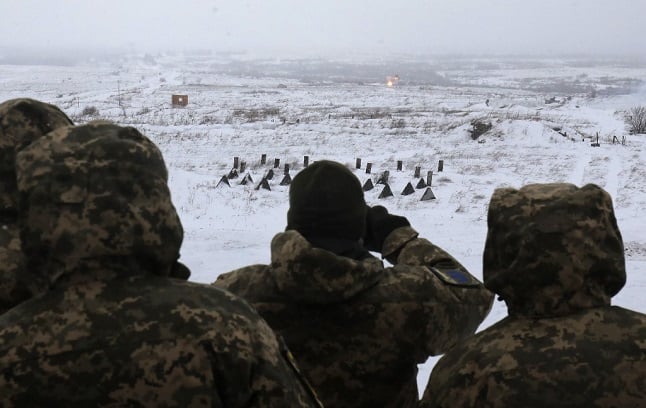 On Thursday morning, Europe woke up to the news that Russia has launched a full military attack on Ukraine with bombardments and troops invading the country.

This follows weeks of diplomatic negotiations and the recent introduction of economic sanctions on Russia by the EU, UK, USA and other countries around the world.

So far, Austria has taken a cautious political approach to the situation as European neighbours and other western nations have publicly spoken out against a Russian invasion of Ukraine.

This all changed earlier this week when on Tuesday Chancellor Karl Nehammer said: “We [Austria] are neutral, but not without opinion.”

On Thursday, in a reaction to the military action in Ukraine, Nehammer went further and said: “What we are witnessing is a breach of international law.”

Again, Austria’s status as a neutral country is in the spotlight and Nehammer highlighted how Austria has offered to serve as a platform for diplomatic dialogue in the crisis, especially as the host country of the Organisation for Security and Cooperation in Europe (OSCE), which is headquartered in Vienna.

What does “neutral” mean?

Austria has a long standing neutral political stance that is rooted in the 1955 Austrian State Treaty and binds Austria to a position of neutrality.

This neutrality also means Austria is not a NATO member, unlike other European countries like Germany and France, so is not bound to support NATO in the event of political and military action, although Austria does support NATO on peacekeeping operations.

But there is more to Austria’s approach to the current crisis than just political neutrality, as Austria is heavily dependent on Russian gas to fulfil its energy demands, just like many other countries across Europe.

What has Austria said about the crisis?

On Thursday, Nehammer reiterated Austria’s solidarity with Ukraine and support of the EU sanctions against Russia. He said the sanctions will be discussed further on Thursday evening at a special EU summit.

As a result, he warned there could be “consequences” for Austria, but confirmed Austria’s energy supply for the remaining winter months is secure.

Austria’s Foreign Minister Alexander Schallenberg (ÖVP) has previously publicly stated that he is against EU sanctions on gas from Russia because Europe is dependent on Russian gas.

However, on Thursday morning Schallenberg took to Twitter to condemn Russia’s attack on Ukraine.

Our worst expectations have materialized. In the early hours of the morning, #Ukraine has become the victim of another Russian aggression. #Russia has chosen the path of violence. In these difficult hours, we stand with Ukraine and the Ukrainian people.

He added in a separate Tweet: “The #EU and its partners will respond swiftly and decisively to this blatant breach of international law.”

Additionally, Schallenberg has previously said the Russian-owned – and controversial – Nord Stream 2 pipeline should be excluded from any possible sanctions on the grounds that it is not yet operational.

On Tuesday, when asked whether Austria and Germany are opposed to sanctions on Nord Stream 2, Chancellor Nehammer dismissed it as a rumour and confirmed Austrian support for the EU. Germany has since announced certification for the pipeline has been put on hold.

READ MORE: How reliant is Austria on Russia for energy?

Nord Stream 2 is a new pipeline by Gazprom that will further supply gas to Europe via the Baltic Sea. Ukraine is against the pipeline on the grounds that less gas would be transported through the country, resulting in less money flowing into the Ukrainian economy.

Austria’s previous rejection of sanctions against the Nord Stream 2 pipeline was criticised by the former Ukrainian Ambassador to Austria who described the move as “cold hearted”.

Could Austria’s economy be impacted by the crisis?

Elisabeth Christen, Senior Economist at the Austrian Institute of Economic Research (Wifo) told The Local that 80 percent of Austria’s gas is currently imported from Russia and that most of the EU is heavily dependent on Russian gas.

This means Austria is in a delicate position, which goes deeper than Austria’s commitment to neutrality.

However, Christen said Russia’s economy is also very reliant on capital from exporting gas, so while Austria – and Europe – relies on Russia to meet energy demands, it is a “mutual dependence”.

Apart from gas supplies though, Austria’s economy is not closely tied to Russia with just 1.5 percent of imports and 1.5 percent of exports flowing between the two countries.

READ MORE: Cost of living in Austria: 2021 inflation at highest level in a decade

Christen told The Local: “There are just €2.2 billion exchanged in trade flows between Austria and Russia, so Russia is not a huge trading partner.

“Russia used to be more important for Austria before 2014 [the annexation of Crimea], but due to the subsequent economic sanctions, the importance of Russia to the Austrian economy has diminished.

“Russia is still important for tourism as Russian tourists spend more than the average tourist, especially in the ski resorts, but Russian tourism levels are currently lower in Austria than in recent years.”

Could Austria’s gas supply be affected?

One big question is whether Austria could run out of gas due to supplies being interrupted by military conflict in Ukraine or harsh sanctions imposed on Russia.

Currently, gas is supplied from Russia to European countries (including Austria) on a long-term contractual basis. Russia is still fulfilling existing contracts within Europe but has ruled out providing any additional supplies, even as energy prices continue to rise and supplies are constrained.

As a result, Christen ruled out the possibility of Austria running out of gas in the short term and said Austria also has a reserve storage of gas, although it is currently at just 25 percent.

FOR MEMBERS: Rising energy prices: How to save money on bills in Austria

Christen said: “Compared to other years the storage level is lower because the winter has been cold and there is a huge supply issue at the moment due to the rebound of economic activity [following Covid-19 lockdowns], so Austria’s gas storage is not as good as in previous years.”

In the worst case scenario of gas reserves running low, Christen said existing supplies could be limited within Austria and Liquified Natural Gas (LNG) could be sourced from other countries.

The Kurier reports that the supply of energy in Austria is protected by the Energy Control Act which means, in the event of gas shortages, large commercial customers would be asked to reduce their consumption before households would be impacted.

Kneissl has submitted a letter of resignation effective from Friday, Rosneft said in a statement.

The 57-year-old made headlines when she invited Putin to her wedding in 2018 and was photographed dancing with him during the event.

She left the Austrian government the following year and joined the board of Rosneft as an independent director in June last year.

Her resignation comes after Rosneft announced Friday that German ex-chancellor Gerhard Schroeder was leaving the board after five years, a day after Germany stripped him of official perks over ties with Russia.

On Friday, Kneissl told AFP that she intended to stay on for her one-year mandate but had told Rosneft in March that she would not seek a further term on the board. Kneissl’s personal website includes several interviews to RT, a Russian state-funded news organisation, the latest two days before Russia launched its military operation in Ukraine on February 24.

Rosneft in its statement thanked Kneissl for her work during the “complex” international situation, saying it was counting on future collaboration with her as an expert.