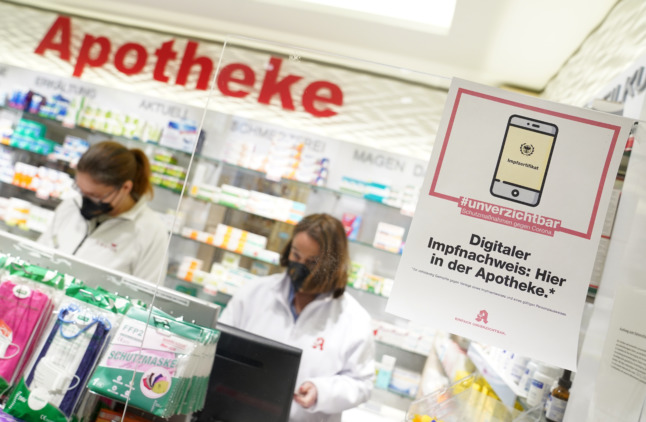 Pharmacy staff work behind the counter at a pharmacy in Hamburg. Photo: picture alliance/dpa | Marcus Brandt

In a move intended to ease pressure on state vaccination clinics, mobile teams and GPs, staff at pharmacies have been trained in administering the vaccines since early January.

At the same time, the government has been working to set up the technical infrastructure required for the pharmacies to transfer data on vaccinations carried out to the Robert Koch Institute (RKI).

Speaking to Tagesschau on Friday, Gabriele Regina Overwiening, president of the German Pharmacists’ Association, said the pharmacies were now ready to start rolling out jabs to customers.

“Next week, pharmacies will be able to order Covid vaccines for the first time in order to offer vaccinations at their branches,” she said. “The first vaccinations can then be carried out from February 8th.”

Germany amended its Covid laws in December to pave the way for pharmacists, dentists and vets to carry out jabs alongside doctors.

Pharmacies will be remunerated for carrying out the jabs in the same way that GPs are, but there’s no obligation for them to participate in the scheme. The prerequisite for doing so is that the staff administering the jabs are properly trained.

Up until recently, people have had to rely on doctors, paediatricians, vaccination centres and mobile teams in order to get inoculated against Covid-19.

As of Friday, 73.8 percent of the general population were fully vaccinated, while just over half (52.2 percent) of the population had received a booster jab.

The assistance of the pharmacies could be a useful aid if the government opts to implement a general vaccine mandate. Such a move is currently being discussed in parliament with a vote planned for the coming weeks.