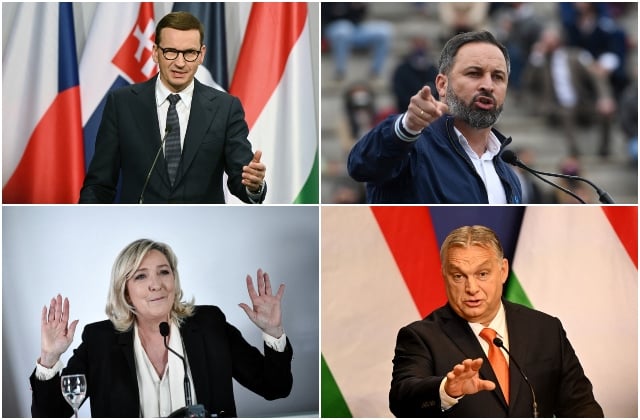 The meeting comes two months after a similar gathering in Warsaw in December, with the follow-up organised by the far-right Vox, which is the third-largest party in Spain’s parliament.

“The aim is to continue the work begun at the Warsaw Summit: to defend Europe against external and internal threats by promoting an alternative to the globalist trend which threatens the European Union by attacking the sovereignty of nations,” said Vox leader Santiago Abascal.

In July, Le Pen, Orban, Abascal, Italy’s Matteo Salvini and a dozen others signed a joint declaration announcing plans for a “grand alliance” in the European Parliament whose aim was to “reform Europe”.

Salvini, leader of Italy’s anti-immigration League, was notably absent from the Warsaw gathering and will also not be attending the Madrid talks.

In December, the parties discussed joint votes on sovereignty and immigration issues in the European Parliament but stopped short of striking a formal alliance.

The right-wing and pro-sovereignty parties fall into two distinct groups within the European Parliament: the Identity and Democracy Group, to which Le Pen’s National Rally and Salvini’s League belong, while the other is the European Conservatives and Reformists Group which groups Vox and Poland’s ruling right-wing Law and Justice (PiS) party among others.

Last March, Orban’s Fidesz left the centre-right European People’s Party, the biggest group in the European Parliament, and is looking for a new home.

Both Poland and Hungary have been locked in a dispute with Brussels over their perceived backsliding on EU democratic norms, and are fighting a mechanism linking payment of EU funds to the rule of law.

Last year, both filed complaints with the European Court of Justice (ECJ) over the mechanism with a ruling expected on February 16.

Sheikh Tamim bin Hamad Al-Thani was welcomed by King Felipe VI at Madrid’s royal palace at the start of his two-day visit, his first to Spain since he ascended the throne in 2013.

The emir, who is accompanied by Qatar’s foreign and energy ministers, is scheduled to hold talks with Prime Minister Pedro Sánchez on Wednesday.

Spain and Qatar are expected to sign a dozen economic and commercial contracts during his visit, mainly regarding energy, according to a Spanish government source.

The visit comes as the European Union is aiming to cut its reliance on Russian gas by two-thirds this year due to Russia’s invasion of  Ukraine.

Qatar, which has the third-largest natural gas reserves in the world, is currently Spain’s fifth-biggest supplier of natural gas after the United States, Algeria, Nigeria and Egypt.

The country accounted for 4.4 percent of Spain’s total gas imports in April and the Spanish government hopes this share could increase.

The emir of Qatar’s trip to Europe will also include visits to Germany, Britain, Slovenia and Switzerland, where he will attend the World Economic Forum which will run in the mountain resort of Davos from May 22nd-26th.