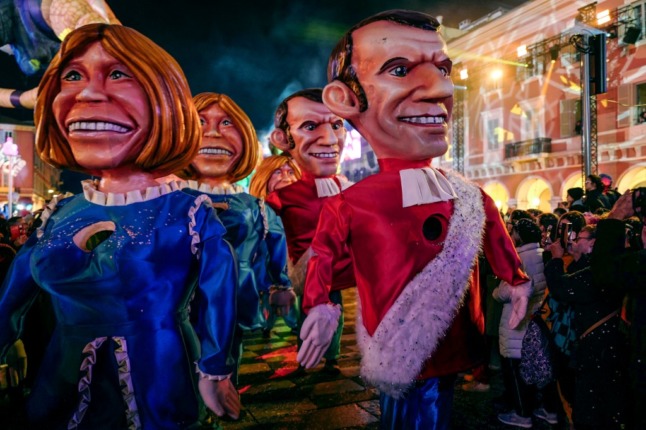 Figurines depicting French President Emmanuel Macron and his wife Brigitte Macron parade during the Nice Carnival. Read our guide to the best events in February 2022. (Photo by VALERY HACHE / AFP)

With its short days and grim weather, February can be a difficult month.

Fortunately, there is lots going on to keep you entertained.

Virtual reality tour of Notre-Dame (all month) – Ever since being devastated by a fire in 2019, Paris’ Notre-Dame cathedral has been largely closed off to the public. But since January 15th, visitors to the Espace Grande Arche de la Défense just outside Paris have been able to don a virtual reality headset and go on a journey through 800 years of the cathedral’s history.

A portion of the ticket sales go towards renovation works of the cathedral itself. The VR exhibition will move to Ile de la Cité in Paris during the Spring. You can buy tickets here.

La Chandeleur (February 2nd)  –  February 2nd marks La Chandeleur, aka the French pancake day. As well as eating lots of delicious crêpes, the French also have a complicated and fun set of superstitions around this day which apparently bring good luck for the year ahead.

If you’re not confident in your skills as home crêpe-maker, get yourself down to your closest Breton restaurant to celebrate in style.

READ ALSO La Chandeleur: When the French get superstitious and go crazy for crêpes

Six Nations Rugby (February 6th and 12th) – The French rugby team is currently one of the best in the world. In February, the Stade de France stadium just outside of Paris will play host to two Six Nations games – the annual competition between the top European rugby nations.

On February 6th, France will play Italy and on February 12th, it will take on Ireland (The France v England game, known as Le Crunch is on March 19th). Tickets for the France-Italy game are still on sale here. A vaccine pass is required to access sports stadiums.

READ ALSO Covid rules: What you need to know about watching sport in France

Winter sales (End on February 8th) – Most of France will be holding post-Christmas sales up until February 8th, but the businesses the départements of Moselle, Meuse, Meurthe-et-Moselle and Les Vosges will have finished their sales by the end of January.

A Romantic Valentine’s in Strasbourg (February 10th-14th) – Many people think of Paris as the City of Love but if you want an alternative location to celebrate Valentine’s Day, Strasbourg is the place for you.

The city is beautiful at this time of year, with golden lights illuminating its medieval buildings. A four-day festival called Strasbourg Mon Amour leads up to Valentine’s Day. Visitors can take part in massage workshops, romantic cruises along the river and concerts. The festival will go ahead this year despite the Covid pandemic, although some activities will require you to hold a vaccine pass. You can read more HERE.

Nice Carnival (February 11th-27th) – The Nice carnival is ranked among the top three in the world alongside Rio and Venice and has been going on since the 13th century. The opening ceremony is scheduled for February 11th although a jam-packed calendar of activities is scheduled until February 27th. The theme of this year’s event is “King of the Animals”. You can find more information HERE. Naturally, changes may be made depending on the latest Covid situation.

Lemon Festival (February 12th-27th) – Never been to a festival with 180 tonnes of citrus fruit? Well this is your chance. Every year a lemon festival is held in Menton, which is in the southeast France, near the border with Italy.

There are exhibitions, talks and tastings on all things lemon. There are also parties, parades and spectacular light shows. Some of the events are free while others are fee paying. Mask wearing and vaccine pass rules will apply. Read more about this event HERE. Winter Jazz Festival (February 17th-20th) – The northern French town of Le Touquet hosts a three day jazz festival with concerts held in bars, hotels, restaurants and in the street. Jazz aficionados will be impressed by this year’s headliners which include Michel Jonasz, Kimberose, Kurt Elling and Ibrahim Maalouf. You can find more on this event HERE.

International Games Festival (February 25th-27th) – This is a fun festival for people of all ages. Held in the Festival Palace of Cannes, it is a celebration of all things ludic with thousands of video games, board games, escape games, VR games, card games and more.

Visitors get the chance to play and learn about games and listen to talks from manufacturers themselves. This event is free but certain fee-paying VIP access is possible. The vaccine pass and mask wearing rules will apply. Read more about the event HERE.

Paris Agricultural Show (February 26th-March 6th) – While you might feel like a factory-farmed chicken when riding a crammed Parisian Metro service, it is actually pretty rare to come across farm animals in the city.

The annual agriculture fair, known as the Salon de l’Agriculture, provides an exception to this. Visitors get to see prize-winning livestock and learn all about French agriculture. There are also tastings, talks, bars and musical performances. You may even spot French President Emmanuel Macron and his rivals milling around. You can buy tickets HERE.

The annual event takes place on the third Saturday in May each year in towns and cities across the whole of Europe. There are temporary exhibitions, themed guided visits, musical entertainment, lectures, concerts, food tasting, historical reconstructions and re-enactments, and film projections. Best news of all, almost everything is free.

Here’s The Local’s guide to getting the most out of the night:

Plan, plan, then throwaway the plan

Consult the online programme and map out your route. A little preparation will make the night much easier – 3,000 museums will be open long into the night in France, and you don’t want to waste hours standing on a bridge arguing about where to go next.

The site has suggestions for major cities, including Lyon, Dijon, Bourges, Strasbourg, Lille, Rouen, Bordeaux, Toulouse, and Marseilles. And four museums that have been closed to the public for years – Musée de Cluny in Paris, the Musée de Valenciennes, the Forum antique de Bavay in Nord and the Musée départemental Albert-Khan in Boulogne-Billancourt – are reopening on the night.

So, decide where you’re going beforehand – then feel free to dump your carefully plotted plan in a bin when you overhear someone else talking about this extraordinary thing they have discovered and go with the flow.

When you are consulting the official website, try not to scream. You have to navigate a map rather than a traditional programme format – though, at least, this year it’s broken down in to French regions, which is marginally less frustrating.

It is actually much easier if you know the specific museums you are interested in visiting, as they have individual programmes of events. But half the fun of a night like this is visiting somewhere you’ve never been before.

Wear shoes for the long haul rather than the first impression. There will be distances to cover and you might even find yourself dancing in the middle of a museum.

And blisters are never a good partner with great art. Leave your skateboard and shopping trolley at home, they will just prove a nuisance when you are going through security checks.

Arriving at the Louvre at 8pm is always going to mean a giant queue. And nothing ruins a night quicker than spending most of it standing in an unmoving line. Try to escape peak times at the major museums – but check they’re not doing something interesting that you don’t want to miss – hip hop dance classes in the Department of Oriental Antiquities, in the Louvre’s Richelieu wing, for example…

Go somewhere you’ve never been to before

Do a lucky dip. Pick somewhere you’ve never heard of and know nothing about. What about the Musée de Valenciennes, which reopens after years of being closed to the public, for example. Its giving visitors the chance to see its fine art under ultraviolet light – which will reveal things you wouldn’t normally see.

Or you could delve deep into the Aude Departmental Archives, in Carcassonne, and discover the amazing life stories of some of the region’s historical figures

Gather the troops, this is a night for multi-generations of family and friends. Art, history and culture, is very much a shared experience and you can usually find something that everyone loves – or hates.

You will always need refreshing and wouldn’t a night of culture be wonderfully enhanced by a delicious picnic on the banks of the Seine, if you’re in Paris.

Your mind will need a little pause from all the intellectual overload. Find a spot, listen to the music (there’s always music from somewhere) and watch the Bateaux Mouches go by as you eat a baguette with some good local cheese and some saucisson.