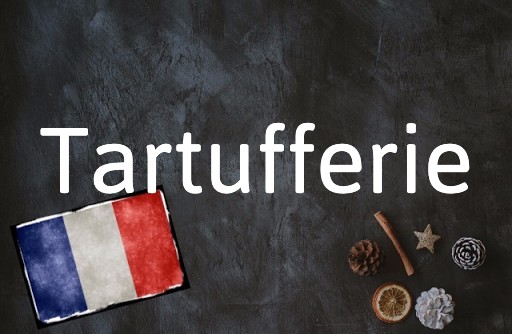 Why do I need to know tartufferie?

Because 400 years since the birth of Molière, people in France are still insulting each other with reference to one of his plays.

It comes from the work of famed playwright Molière, widely considered the French Shakespeare.

Probably his best-known play is Tartuffe, in which the title character presents himself as a pious man, while sneakily attempting to seduce the lady of the household where he is staying as a guest.

Since then, the word tartuffe has become shorthand for “hypocrite” or someone who feigns religious or other virtue.

It follows that tartufferie means “hypocrisy”.

You often hear politicians in France accusing each other of tartufferie.

Pour les oppositions tout est scandale. Quelle tartufferie de faire croire qu’appliquer la Constitution est une atteinte à la démocratie – For the opposition everything is a scandal. What hypocrisy to make out that applying the constitution is an attack on democracy

Faire passer pour – to pass off as

Why do I need to know la Première ministre?

Because France has one now.

La Première ministre – usually pronounced lah prem-ee-air mean-east-ruh– translates as “the prime minister,” but this spelling is different from what you might be used to seeing.

This title is feminised, indicating that the prime minister in question is a woman. Under former PMs such as Jean Castex, the masculine title Le Premier ministre was used.

Feminising work titles has been controversial in France, and most titles like “le Premier ministre” have been automatically put in masculine form.

But in 2019, France’s infamous Academie Francaise, which polices the French language and typically resists any sweeping changes to it, changed their stance and said there was “no obstacle in principle” to the wholesale feminisation of job titles.