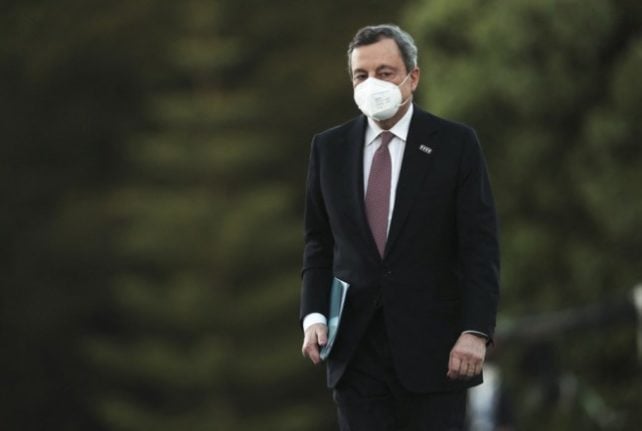 Italy's prime minister Mario Draghi has asked for guidance on his future role in the country as presidential elections are underway. Photo by Luis Vieira / POOL / AFP

After voting in Italy’s presidential elections began on Monday, 672 of the almost 1,000 MPs, senators and regional representatives who voted left their ballots blank, leaving no agreement between the main parties on a candidate.

The secret nature of the vote, the behind-the-scenes negotiations and lack of a formal candidate list have drawn comparisons with a papal conclave from the Italian media with references made to ‘white’ and ‘black smoke’ – and can be just as hard to predict.

Draghi, a former European Central Bank chief feted for his handling of the eurozone debt crisis and his leadership of Italy’s government over the last 11 months, is widely viewed as the most qualified candidate.

But many fear a move to head of state would cause his coalition to unravel and even spark snap elections, just as Italy is recovering from the devastation of coronavirus.

As voting got underway, the current premier asked political leaders, “What is your will, what are your expectations regarding my role for the country?” reported news agency Ansa.

Opinions continue to be divided over his future role, with political parties arguing the merits of both remaining as prime minister or taking over the presidential tenure instead.

Aside from Draghi, there are more than a dozen names in the mix.

But the controversial public figure called on Draghi to stay as premier to see through reforms – to the tax and justice system and public administration – promised in return for billions of euros in EU recovery funds. Matteo Salvini of the anti-immigration League party also warned “it would be dangerous for Italy in a difficult economic time… to reinvent a new government from scratch.”

Referring to the seat of the government, he added, “Draghi at Palazzo Chigi is a precious resource for Italy.”

The biggest party in parliament, the Five Star Movement, is also keen to keep Draghi in place. It is polling badly and would lose most of its seats in any snap vote.

But Enrico Letta, leader of the centre-left Democratic Party, said Sunday that Draghi had been an “extraordinary resource” for Italy and insisted his name was still on the table for president.

The head of state is a largely ceremonial post but the holder wields considerable power during political crises, from dissolving parliament to picking new prime ministers and denying mandates to fragile coalitions.

Those who maintain that Draghi should be moved to Rome’s Quirinale presidential palace, argue that with another president, aside from the currently serving Mattarella, the government would not hold up very well, according to Italian media reports.

READ ALSO: How much power does the Italian president actually have?

The disparate parties in Draghi’s coalition are already in battle mode ahead of next year’s general elections.

“This is a key and very complicated election, because the political parties are weak, they are in an utterly fragmented state,” Giovanni Orsina, head of the Luiss School of Government in Rome, told AFP.

Italy has a notoriously unstable electoral system and has seen dozens of governments come and go since World War II – with outgoing president Sergio Mattarella seeing five during his seven-year term.

But Draghi has led a remarkably united government since being appointed by Mattarella in February 2021.

The eurozone’s third largest economy has returned to growth following a punishing recession in 2020 sparked by the pandemic.

And Draghi has initiated reforms demanded in return for funds from the EU’s post-pandemic recovery scheme, of which Rome is the main beneficiary, to the tune of almost 200 billion euros ($225 billion).

No voting breakthrough until Thursday

Many international investors are concerned that debt-laden Italy would slip behind on the tight reform schedule should Draghi leave.

Others say he would be better placed as president to ensure political stability and good relations with Brussels – particularly should the far right win the next election.

The 74-year-old Draghi, famous for pledging “whatever it takes” to save the euro a decade ago, hinted last month at his interest in the presidency but has since kept silent.

Voting takes place in the lower Chamber of Deputies. Electors who tested positive or are isolating used a drive-through voting station set up in the car park.

Commentators predict no breakthrough until Thursday, the fourth round, when the threshold for victory falls from a two-thirds majority to an absolute majority – that would require a 505 vote majority.

Italy’s current president Sergio Mattarella is due to finish his seven-year term on February 3rd.