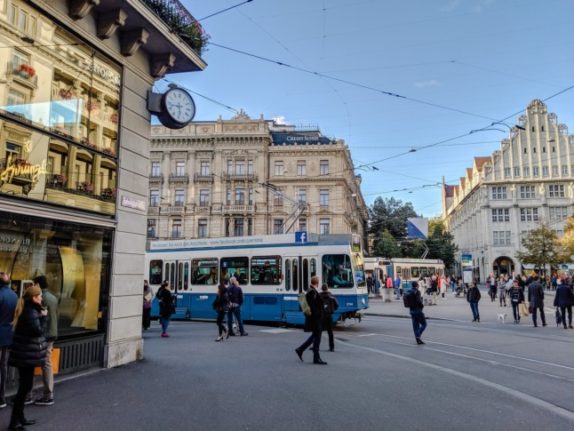 Bahnhofstrasse (here in Zurich) is one of the most common street names in Switzerland. Photo by Tomek Baginski on Unsplash

According to data from the Federal Office of Public Health (FOPH), 68.11 percent of Switzerland’s population is fully vaccinated as at January 23rd.

While the numbers are climbing – though slowly — the country still lags behind neighbour nations and is below the European Union average as well. Switzerland has still not caught up with other nations’  immunisation rate. Image by Our World in Data

The distribution of the national languages has seen “moderate change” in the past four decades, according to a new study by the Federal Statistical Office (FSO)

The proportion of German, Italian and Romansh spoken as people’s main language(s) have fallen, while those of French, along with non-national languages, especially English and Portuguese, have increased, primarily due to immigration.

This FSO chart shows what languages are spoken in Switzerland’s households. READ MORE: How did Switzerland become a country with four languages?

The rollout of vaccinations for children between the ages of five to 12 began in Switzerland on January 3rd, but has been slow to start, according to reports from cantons.

To date, 32,000 children — 5.2 percent of that age group — have received their shots, with the highest number in the Swiss-German part of the country.

Although some parents are reluctant to inoculate their children against Covid because of concerns over side effects, “clinical trial results show that the vaccine is safe and effective in this age group”, health experts said.

As customers of several public transport companies could no longer renew their subscription online, the SBB restored access with the old mechanism in December 2021.

This decision inadvertently led to a loophole in security.

The leaked data contained information on tickets purchased and/or the validity period of subscriptions, SBB said. About half of the data was exclusively related to customers’ names and dates of birth.

However, “no information was leaked about the place of residence, means of payment, passwords and email addresses. The other half of the data contained impersonal information about tickets purchased from vending machines”.

The company added it was able to remedy this flaw and “unauthorised automated viewing of data is no longer possible”.

These are the most common street names in Switzerland

There are about 93,000 street names in Switzerland, and Watson news platform looked at which ones are the most common across the country.

The result of their finding: Dorfstrasse – literally ‘village street’ is the most prevalent, found in 652 Swiss municipalities and communes.

It is followed by Hauptstrasse (553) (main street), and Bahnhofstrasse (524) (station street).

The longest street name — Georg-Friedrich-Heilmann-Strasse —can be found Biel / Bienne .

The above may not fall under the ‘news you can use’ category, but it may be worth committing to memory anyway — this is just the kind of questions could be asked on the citizenship test.

READ MORE: Would you pass a Swiss citizenship test?