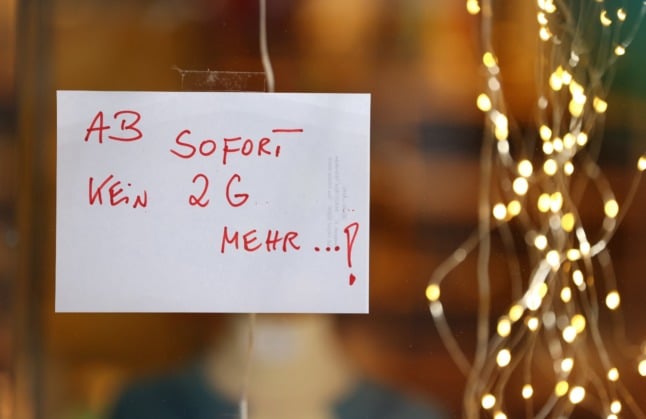 The federal and state governments are meeting on Monday to discuss the Covid situation in Germany – and they want to stick to the current regulations that include strict entry rules to most public places.

But in view of Omicron variant, politicians from Bavaria’s conservative Christian Social Union (CSU) and the Free Democrats (FDP) are demanding that they start thinking about an end to the restrictions.

CSU state group leader Alexander Dobrindt told Welt that he wants to see Chancellor Olaf Scholz and the state leaders come up with a strategy to “move out of the pandemic step by step”.

He said that because experts agree that Omicron generally results in milder illness than previous Covid variants, the outlook needs to change.

“That is why the evaluation standards must also be adjusted,” he said, adding that the incidence cannot be the yardstick for deciding measures.

“The central question must be: how burdened is the health system?” he said. This has to be the basis “for all decisions by the federal and state governments”, added Dobrindt.

Federal Justice Minister Marco Buschmann told broadcaster ARD that when the peak of the Omicron wave – expected for mid-February – was reached and the numbers were also declining in hospitals, the measures would have to be relaxed.

Christof Rasche, leader of the FDP state parliamentary group in North Rhine-Westphalia, went further and called for relaxations for large events. He also urged for the 2G regulation in shops and 2G-plus in restaurants be shelved.

He pointed out that courts in some federal states – including Bavaria – have already overturned the 2G rule in shops.

Earlier, the German Association of Towns and Municipalities also urged the federal and state governments to develop a gradual Covid relaxation plan.

“In neighbouring countries, we can see that the pandemic will reach its peak at some point, and then the numbers will drop drastically and quickly again,” he said.

As The Local has reported, draft plans show that Chancellor Scholz and the state leaders want to keep the current regulations in place for now against the backdrop of rising infections and fears that hospitalisations will increase, and key infrastructure will struggle.

However, it is expected that leaders will discuss plans on how to relax rules in future during Monday’s Covid summit.