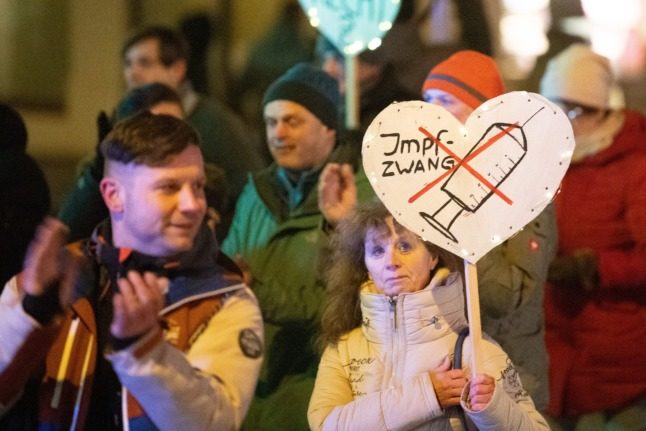 Speaking to DPA over the weekend, Dirk Wiese, the deputy chairman of the SPD Parliamentary Group who is working together with other politicians from the traffic coalition to flesh out proposals for the vaccine mandate, provided details of their plans.

According to Wiese, jabs could be made compulsory in Germany for anyone over the age of 18 for a limited period of one to two years. People who ignore the mandate or don’t have sufficient vaccine protection will be hit with fines.

Though the idea of a centralised vaccine register has been floated in the past weeks, the so-called traffic light coalition parties (SPD, Greens and FDP) are keen to avoid this because it would be too time-consuming.

Instead, they would have vaccinations and exceptions checked by local public health officers.

On Friday, Wiese, together with six politicians from the Greens and the FDP, announced a group motion for compulsory vaccination from the age of 18 in a letter to all members of the Bundestag – except those of the far-right AfD party.

Green Party health politician Janosch Dahmen is one of the politicians tasked with shaping the legislation.

“Compulsory vaccination can make society more peaceful because it provides clarity,” he told Bild am Sonntag.

Both Dahmen and Wiese want to see fans levied on people who aren’t sufficiently vaccinated as opposed to more coercive punishments like prison sentences. According to the Administrative Offences Acts, government fines can be set anywhere between €5 and €1,000 unless a specific law says otherwise. That means that that fines levied on the unvaccinated could be even higher.

In neighbouring Austria, where a vaccine mandate is due to come into force in February, fines are set at a maximum of €3,600.

Dahmen has previously come out in favour of a fine “in the middle three-digit range”, while Wiese has suggested that some of the penalties could be means-tested.

Three shots rather than two

If the traffic light’s vaccine mandate law is voted through by parliament later this year, three jabs would be required for someone to count as fully vaccinated, rather than the previous two.

“On the basis of current studies, one can say that with three vaccinations one has achieved a good basic immunisation against a severe course of Covid,” Wiese explained.

However, if a further booster jab is recommended for certain groups of the population later in the pandemic, this additional shot would be voluntary.

Wiese said the duration of the vaccine mandate would be guided by advice from the Covid Council of Experts, but would likely be one to two years.

The plans laid out by the governing SPD, Greens and FDP coalition aren’t without competition, however.

According to reports in Tagesspiegel, a plan to introduce mandatory Covid jabs for health workers is facing major opposition from state leaders.

Though the law has already been passed by the federal parliament, states are allegedly pushing for the introduction of the law to be postponed until a so-called ‘dead’ or ‘inactivated’ vaccine – where the virus is killed off – from Novavax is available on the market.

Politicians in favour of postponing the legislation believe that the new vaccine could find more public acceptance than the current mRNA and viral vector vaccines.

A recent survey of vaccine hesitant people found that around half of those who hadn’t got vaccinated against Covid would do so if they could get an inactivated or dead vaccine.

This type of vaccine involves growing a virus and then killing it off to prevent any disease-creating capacity.

State leaders are also reportedly concerned that nurses who are against vaccination could fail to turn up to work once the new law is introduced, exacerbating existing staff shortages.

READ ALSO: ‘I was against vaccine mandates in Germany – until hospitals became overwhelmed’

“We don’t want there to be a loss of nursing capacities in the nursing and hospital sector,” Bavarian state premier Markus Söder (CSU) told the Augsburger Allgemeine.

In his view, it would be highly counterproductive if an exodus of nursing staff led to an overload of the healthcare system.

The federal government should therefore once again examine introducing a vaccine mandate for all, he argued.