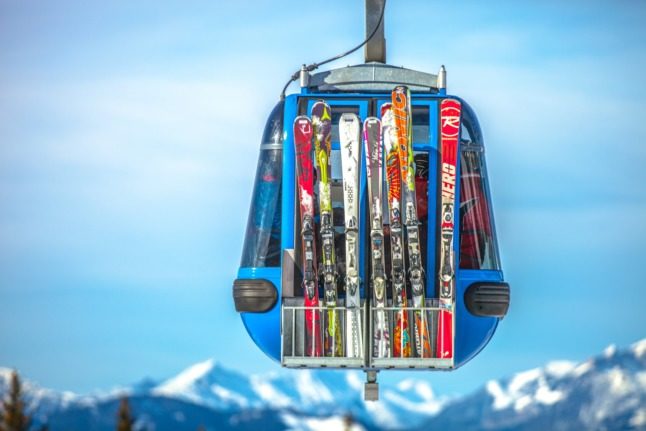 You can reach the 4 Vallées resorts faster by sitting on a train than in a traffic jam. Photo by Kipras Štreimikis on Unsplash

The latest figures from the Federal Office of Public Health (FOPH) show that the highest-ever number of new coronavirus infections was reached this week: 39,807.

This spike seems to counter a statement by Virginie Masserey, FOPH’s head of the infection control unit, that Switzerland has likely reached the peak of the pandemic, which implies that cases should be dropping rather than increasing.

However, the rise in numbers of infections has so far not put additional pressure on hospitals. Health officials attribute this to the fact that Omicron, which currently accounts for over 88 percent of all infections in Switzerland, is less virulent than previous variants. This means that vaccinated and boosted people are much less likely to have severe enough symptoms to require hospitalisation.

On Friday nights during the winter, traffic jams are a common sight on Swiss motorways, as skiers are heading to the mountains for the weekend.

To prevent these bottlenecks, tourism officials and public transport companies are offering alternative means to get to the slopes.

The latest such example is the “VosAlpes Express”, launched on January 15th by Swiss Federal Railways (SBB). This line connects Fribourg with Le Châble (VS),  to reach the 4 Vallées resorts of Verbier and Bruson.

This ‘snow train’ is on trial during the ski season and will run until March 27th. If continued, it would become the second SBB convoy after the Verbier Express, launched in December 2019, which connects Geneva to Le Châble

And speaking of Swiss trains…

If you have been reading the news lately, you might have come across our article about the more frequent delays and cancellations within the SBB network.

However, according to new figures released by the company,  91.9 percent of passenger trains in 2021 arrived on time or less than three minutes late. And 98 percent of travellers caught their connections punctually.

Strangely enough, Covid is one of the reasons for on-time arrivals in 2021: pandemic has helped “decongest” the rail system, especially at peak times, when transfers from one train to another are typically longer.

Other factors are improved site planning and better distribution of work throughout the year. There were also fewer technical faults in proportion to the train-kilometres travelled, SBB said.

Switzerland to vote on organ donation

Currently, a person must explicitly consent to organ donation after death. But this system failed to find enough donors, so the parliament adopted the principle of ‘presumed consent’ in October 2021.

This means any adult  resident of Switzerland would automatically be considered an organ donor, unless they have left instructions to the contrary, or relatives oppose the removal on the basis that this respects the presumed wishes of the deceased.

However, opponents of the new law collected 64,000 signatures (14,000 more than required by law) against this revision.

“Such a paradigm shift must be submitted to the people [for vote],” said Franziska Sprecher, member of the referendum committee and professor of law at the University of Bern.

She added that this legislation violates the constitutional right of each person to physical and mental integrity, as well as  to self-determination.

The vote is scheduled for May 15th.