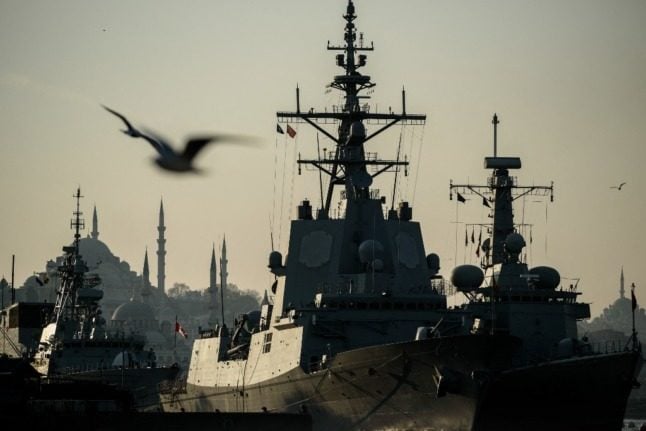 NATO frigate Sps Blas De Lezo of Spain docked in Istanbul in 2015. The warship will be sent to the Black Sea in "three or four days". (Photo by OZAN KOSE / AFP)

Spanish Defence Minister Margarita Robles on Thursday confirmed that in “three or four days” Spain will send its Blas de Lezo military ship to the Black Sea in Bulgarian waters, to join the already dispatched Acción Marítima (BAM) Meteoro frigate which is docked there.

Robles added that Spanish authorities are also offering to send fighter planes to the region to assist NATO in protecting Ukraine from a potential invasion by Russia.

How many more Spanish military troops would be deployed along with Blas de Lezo’s 250 marines is yet to be confirmed, but Spain already has 360 NATO-aligned soldiers in Lithuania and six Eurofigher jets in Romania surveilling the Black Sea.

“Spain has participated in all NATO deployments as a serious ally for a number of years, and in this specific case the deployment of the frigate has been brought forward within the framework of this agreement,” the Spanish Defence Minister said.

“Russia cannot tell any country what it can do, and NATO will defend any country that Russia wants to enter”.

The deployment of Spanish military troops to the region is causing further divisions in Spain’s coalition government, with members of far-left party Unidas Podemos criticising Spain’s involvement in the growing conflict and calling it a “grave error” and “strategically clumsy” as it will “increase the price of gas, fuel and cause inflation to rise”.

Former Unidas Podemos leader Pablo Iglesias warned Pedro Sánchez’s Socialists that “pro-US furore cost (ex-PP Spanish Prime Minister) Aznar his job”, in reference to Spain’s involvement in the Iraq War, and “it would be very clumsy for the socialist part of the Spanish government to go against its partners and form the ‘war party with the PP”.

Washington and Moscow’s top diplomats meet on Friday in Geneva in a last-ditch bid for a solution over Ukraine, with the United States increasingly fearing that Russia will invade despite warnings of severe reprisals.

President Joe Biden bluntly assessed on Wednesday that his counterpart Vladimir Putin is likely to “move in” on Ukraine and warned of a “disaster for Russia”.

The United States and its allies have warned of severe economic sanctions for an invasion.

Kremlin spokesman Dmitry Peskov responded that Biden’s remarks were destabilising and could “inspire some hotheads in Ukraine with false hopes”.

Russia, which already fuels a deadly insurgency in eastern Ukraine that has killed more than 13,000 people since 2014, has demanded guarantees that NATO never accept the former Soviet republic or expand otherwise in Moscow’s old sphere.

The United States has declared the idea a “non-starter” and accused Russia of undermining Europe’s post-Cold War order by bullying another country into submission.

Even while rejecting the core Russian demands, the Biden administration has said it is willing to speak to Moscow about its security concerns.

One proposal by the United States is to revive restrictions on missiles in Europe that had been set by the Intermediate-Range Nuclear Forces Treaty, a Cold War deal trashed by former president Donald Trump’s administration as it accused Moscow of violations.

The Biden administration has also offered more transparency on military exercises. Russia has not rejected the proposals but says that its core concern is Ukraine and on Thursday, announced massive naval drills in the Atlantic, Pacific, Arctic and Mediterranean as a show of force.

Sheikh Tamim bin Hamad Al-Thani was welcomed by King Felipe VI at Madrid’s royal palace at the start of his two-day visit, his first to Spain since he ascended the throne in 2013.

The emir, who is accompanied by Qatar’s foreign and energy ministers, is scheduled to hold talks with Prime Minister Pedro Sánchez on Wednesday.

Spain and Qatar are expected to sign a dozen economic and commercial contracts during his visit, mainly regarding energy, according to a Spanish government source.

The visit comes as the European Union is aiming to cut its reliance on Russian gas by two-thirds this year due to Russia’s invasion of  Ukraine.

Qatar, which has the third-largest natural gas reserves in the world, is currently Spain’s fifth-biggest supplier of natural gas after the United States, Algeria, Nigeria and Egypt.

The country accounted for 4.4 percent of Spain’s total gas imports in April and the Spanish government hopes this share could increase.

The emir of Qatar’s trip to Europe will also include visits to Germany, Britain, Slovenia and Switzerland, where he will attend the World Economic Forum which will run in the mountain resort of Davos from May 22nd-26th.