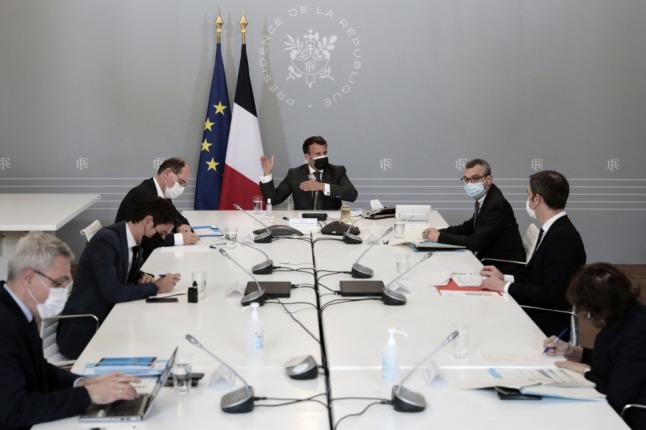 The government’s Defence Council met Thursday – one day later than usual due to president Emmanuel Macron’s trip to the European Parliament on Wednesday – to consider the latest health situation.

After the meeting, it was announced that Prime Minister Jean Castex and health minister Olivier Véran will give a press conference at 7pm on Thursday.

In it, they will lay out a timetable to lift some of France’s Covid restrictions.

Government spokesman Gabriel Attal said: “A precise timetable will be presented at 7pm” regarding the lifting of restrictions. “The arrival of the vaccine pass will certainly allow for the alleviation of some measures that remain in force today.”

Extra restrictions were imposed in France just before New Year’s Eve. Described at the time as temporary measures, these are the ones most likely to be lifted first.

The nightclub closure order currently runs until Monday, January 24th, but there are reports that ministers want to extend it by at least two weeks.

Likewise the Labour Minister is reported to want to extend the home-working guidance for at least another two weeks.

In mid December the mask-wearing rule was extended to cover all indoor public areas, including those such as cinemas that are covered by the health pass.

At the same time eating was also banned in venues including cinemas and sports stadia, in order to ensure customers remain masked.

Numerous local authorities including Paris have also issued their own orders mandating masks in crowded outdoor spaces such as markets and – in resort towns – queues for ski lifts.

The government is unlikely to directly overrule local authorities, and with soaring case rates due to the Omicron variant it seems likely that mask mandates will remain in place for some weeks yet.

The most recent changes are likely to be lifted first, rather than a complete scrapping of all mask-wearing rules, which have been in place since May 2020.

Teachers striking on Thursday over the Covid protocols for schools, which they say are chaotic and put teachers at risk.

The government already made some concessions after last week’s strike, but with pressure mounting and the Education Minister’s Ibiza holiday becoming a political issue, there could be further announcements designed to placate teachers and end the strikes – another one is planned for next Thursday.

EXPLAINED: What links a French teachers’ strike and Ibiza?

France’s health pass is shortly to become a vaccine pass, requiring people to be fully vaccinated in order to enter a wide range of venues including bars, cafés, gyms, leisure centres, tourist sites and long-distance trains.

This has been a flagship policy for the government and it has recently expended quite some effort in order to get the new vaccine pass mandate through parliament, so it seems unlikely this will be lifted soon.

Organisers of the French Open – which takes place in May – are already warning that unvaccinated tennis players will not be able to take part in the tournament.

Travel rules do not generally form part of the Defence Council’s strategy and any changes are usually announced separately.

Since the lifting of a ban on almost all types of travel to and from the UK, the French rules allow travel for any reason for vaccinated travellers from all countries, including those on the red list, without a quarantine requirement.

Unvaccinated travellers from red and orange countries – which includes the USA, UK and Canada – can only travel if their trip is essential. Find full details of the traffic light travel system HERE.

As ever, any lifting of rules depends on the health situation, which at present is still tense in France.

The Omicron variant, which now makes up 98 percent of cases, is driving huge daily case numbers – more than 400,000 new cases have been reported for two days in a row, an all-time French record.

Recent analysis from the Covidtracker team found that going into a restaurant in Paris that has 50 or more customers or staff carries a 98 percent risk that at least one person will have Covid.

However the massive case numbers do not at present seem to be translating into very high numbers of hospitalisations, although the numbers of Covid patients in hospital and in intensive care units are rising and hospitals are under pressure.

The government is hoping that the change of the health pass to a vaccine pass will push vaccination rates higher, since vaccinated people who contract Covid are significantly less likely to end up in intensive care. Across the country, 80 percent of Covid ICU patients are unvaccinated and of the rest, nearly 90 percent have suppressed immune systems due to other illnesses.

It didn’t take long for scandal to hit the France’s new government.

An investigation by Mediapart published the day after the final list of ministerial positions was announced revealed that two women have accused one of the appointees of rape.

Damien Abad, the new Solidarity Minister denies the allegations and a police investigation into one allegation was dropped in 2017. But another could be about to open.

Who is Damien Abad?

Damien Abad is a 42-year-old son of a miner from Nimes in southern France who became the first handicapped MP to be elected in 2012. He has arthrogryposis, a rare condition that affects the joints.

Prior to his appointment as the Minister for Solidarity, Autonomy and Disabled People, he was the leader of the France’s right-wing Republicans party in the Assemblée nationale.

What are the allegations?

Two alleged victims, who didn’t know each other, told Mediapart that Abad raped them on separate occasions in 2010 and 2011.

The first woman described meeting Abad for dinner after having met him weeks earlier at a wedding. She said she blacked out after one glass of champagne and woke up in her underwear in a hotel bed with Abad the next morning fearing she had been drugged.

A second woman who lodged a formal charge against Abad in 2017 said that he harassed her by text message for years. She eventually agreed to meet with him one evening. After initially consenting, she told him to stop – but her plea fell on deaf ears as Abad raped her.

What does Abad have to say?

The new minister denies the accusations.

“It is physically impossible for me to commit the acts described,” he told Mediapart – in reference to his disability.

He admitted to sending “sometimes intimate” messages, but said he had “obviously never drugged anyone”.

“I was able to have adventures, I stand by my claim that they were always consensual.”

Is he under investigation?

The second alleged victim made a formal allegation against Abad in 2017.

A subsequent investigation was dropped later that year after a “lack of sufficient evidence was gathered”.

Mediapart report that Abad’s entourage were not questioned by police and that the MP told investigators that he had no memory of the alleged crime.

The first alleged victim flagged the abuse to the Observatory of Sexist and Sexual Violence in Politics – an unofficial watchdog monitoring elected bodies – earlier this month.

The Observatory has since brought the case to the state prosecutor, but it is unclear if another investigation will be launched.

The tone deaf appointment of Gérald Darmanin as Interior Minister in 2020 was controversial because at the time he was under investigation for rape. His nomination was met with street protests in Paris and elsewhere. Feminists accused (and continue to accuse) Emmanuel Macron of not taking sexual violence seriously.

The investigation into Darmanin’s alleged crime has since been dropped.

Some will question whether the naming of Abad shows that lessons have not been learned.

“Once again a minister  in the government of Emmanuel Macron accused of rape,” said Caroline De Haas, the founder of the #NousToutes feminist movement.

The Observatory sent a message warning senior party figures in the Republicans and LREM about the allegations on Monday – prior to Abad’s nomination.

France’s new Prime Minister Élisabeth Borne denied having any knowledge of the warning.

“I am going to be very clear on all these questions of harassment and sexual violence, there will be no impunity,” she said during a visit to Calvados.

“If there are new elements, if the courts are summoned, we will accept the consequences.”

The Observatory meanwhile claims it has been ignored.

“Despite our alerts, Damien Abad who is accused of rape has been named in government. Thoughts and support to the victims,” it tweeted.