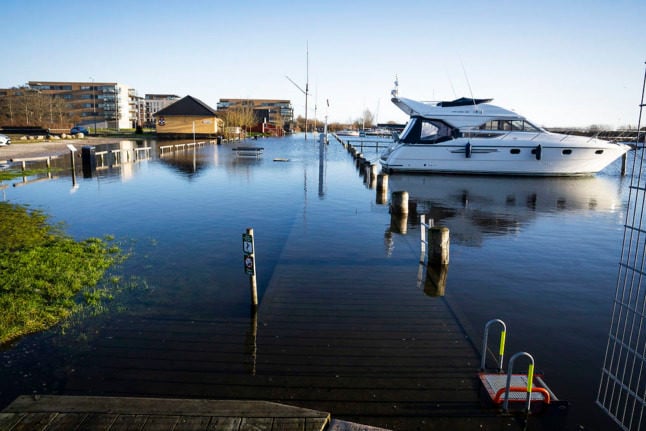 High water levels at the harbour in Randers on January 17th. High winds are likely to cause high water in other areas ofDenmark on January 20th. Photo: Bo Amstrup/Ritzau Scanpix

Mink farmers yet to restart businesses

The mink fur industry in Denmark was shut down by law after the government’s controversial decision to cull millions of animals and make the trade illegal in late 2020, due to concerns over a variant of Covid-19 that had emerged from mink farms. An inquiry into the decision to cull the minks, which was later found to be illegal, is still ongoing.

A ban on the industry set down at the time expires at the end of 2022 but mink farmers are yet to apply to re-establish their businesses, news wire Ritzau writes.

Mink farmers are permitted to apply for a permit that puts their businesses on hold until they are allowed to resume them, but none have done so thus far, according to the report.

When Danish People’s Party (DF) votes for a new leader at a party congress this weekend, former immigration minister Inger Støjberg won’t be one of the options.

Although senior DF figures urged Støjberg to join and immediately take the role of leader, the ex-Liberal party minister, who has never been a member of DF, declined the offer.

“I think it would be completely wrong to run for leader of a party you’ve never been a member of,” she said.

“I feel fundamentally that, if you run to be the leader of a party, you should have worn out at least two cars on country roads campaigning with members,” she said in an online discussion on her Facebook page and website, Ritzau writes.

Støjberg was last month fired from parliament after being found guilty of breaking the ministerial code, although this did not discourage DF in offering her the chance to take the party’s most senior job.

Danish tennis star through again in Melbourne after beating world no. 7

Emerging Danish tennis star Clara Tauson is in the third round of the Australian Open in Melbourne after a surprise victory over world number 7 Anett Kontaveit in straight sets. The match was completed in the early hours of Thursday Danish time.

Tauson, who defeated Australian Astra Sharma in the first round, had considerably more support from the 7,500 crowd this time around as she prevailed over her Estonian opponent.

Melbourne is the scene of the greatest moment in Danish tennis history, when Caroline Wozniacki became the only Dane to win a Grand Slam tournament in 2018.

Last night was a gusty one in much of Denmark with strong winds up to storm force in some areas. Broadcaster DR reports fallen trees and broken scaffolding in several locations.

Several bridges have been closed to high-sided vehicles due to the conditions, so it is advisable to check local traffic reports if you have a journey ahead of you.

Met agency DMI meanwhile says water levels are high on the northern coasts of Zealand and Funen. Water levels can reach up to 120-130 centimetres above normal in the worst-affected areas.