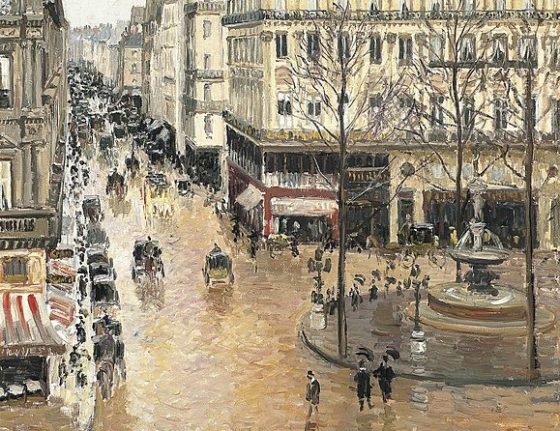 Under California law, a looted or stolen item cannot be passed on even if it was purchased in good faith. Source: Camille Pissarro's painting "Rue St Honoré, apres-midi/Wikimedia

The 1897 painting, “Rue Saint-Honore in the Afternoon. Effect of Rain,” like some other works by the French impressionist, is at the heart of a long legal battle with international ramifications.

The painting, now estimated to be worth around $30 million, once belonged to Lilly Cassirer Neubauer, a member of a prominent German Jewish family.

Neubauer was forced to hand it over for a pittance to the Nazis in 1939 in exchange for the visa which allowed her to leave Germany.

The Neubauer family lost track of the painting after World War II and accepted compensation of $13,000 from the German government in 1958 but did not waive their rights to the artwork. The painting changed hands several times in the ensuing decades before ending up with the Thyssen-Bornemisza museum in Madrid.

It was acquired in 1976 by Baron Hans-Heinrich Thyssen Bornemisza, heir to the Thyssen industrial group, from the Stephen Hahn Gallery in New York.

Claude Cassirer, Neubauer’s grandson, discovered in 2000 that the painting was on display in Madrid and launched legal efforts in Spain and California to recover it.

Cassirer died in 2010 at the age of 89 but his children, David and Ana, have pursued the court challenges.

After suffering defeats in courts in Spain and California, the Supreme Court represents their final hope.

The highest US court will decide whether Spanish law or US state law applies in the case.

Under Spanish property law, a purchaser is not required to return an item if it was not known at the time that it may have had illegal origins and they have possessed it for at least six years.

“At no point were the Baron’s title to the painting nor his good faith in its acquisition called into question,” according to a statement by the museum.

Under California law, a looted or stolen item cannot be passed on even if it was purchased in good faith.

The court heard technical arguments on Tuesday as to which law should apply and is expected to render its decision in several months.

The Nazis are estimated to have plundered some 600,000 artworks in Europe, according to a US congressional report, and courts on both sides of the Atlantic have regularly heard cases designed to restore items to their original owners.

According to El Mundo daily, the sentence was unprecedented in Spain.

In a ruling handed down by a court in the southern city of Granada which was seen by AFP on Wednesday, the unnamed woman was convicted of filing false allegations, offences against moral integrity and abandonment of parental responsibility.

She was also ordered to pay €40,000 ($42,000) each to the child and her father for the harm caused by her unfounded allegations, which were aimed at securing sole custody of her daughter, now nine.

The court also took away the mother’s parental responsibility for 10 years on grounds she posed “a threat to (her daughter’s) development”, according to court documents dated Monday.

The woman had filed eight reports to the police and the courts over a two-year period, accusing her husband of abuse and on one occasion rape as they were in the throes of getting divorced.

She also took her daughter to be examined by doctors and psychologists on 10 separate occasions.

None of them ever found any evidence of the alleged abuse.

The ongoing gynaecological and psychological examinations had an impact on the child’s “psychological stability and her performance at school”, according to the court documents.

The aim was to “obtain the sole and exclusive custody” of their daughter.

The sentence, which can be appealed, described the mother as a person with a predisposition for “lying” who displayed “shameless cynicism” and “cunning malice with obsessive overtones”.

The couple married in 2010 and had a daughter in 2012. But they split up in 2017 and the problems began a year later when the father, an English teacher, requested joint custody.

After his ex-wife began filing the false allegations against him, he lost most of his students along with his “emotion stability, peace of mind and sense of calm”, the court found.

“It’s like being buried alive,” he told El Mundo.

“It’s trying to kill someone without laying a finger on them… accusing them of the vilest, worst thing that a human being can do: harming your own daughter.”