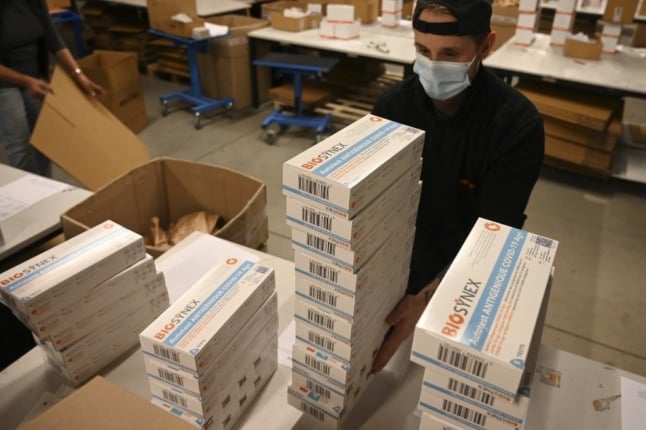 From Saturday January 15th, buying an antigen test from a chemist in Spain will be considerably cheaper, now that the national government has decided pharmacies must sell each of these rapid self-tests for €2.94 at most.

The drastic rise in demand recently, coupled with some shortages in supply, has led the price of antigen tests to more than double in many pharmacies, from €4 to €8, or higher still.

Sales shot up 67 percent in the week before Christmas, equalling seven million antigen tests sold, and ever-increasing Omicron cases are keeping demand up in January 2022.

On Monday Spanish Prime Minister Pedro Sánchez announced his government would regulate the antigen test market to prevent this “bottleneck” from happening again, and three days later Spaniards have a start date and a confirmed price drop.

“The main objective has been to set a price that’s as affordable as possible, always maintaining the necessary balance so that the product is available in pharmacies,” Health Minister Carolina Darias said at a press conference on Thursday.

To set the maximum price of €2.94, the cost of antigen test throughout the distribution process has been taken into account, as well as the price of these items “in neighbouring countries”, where in many cases self-tests have been considerably cheaper than in Spain.

The announcement follows a unanimous decision by Spain’s Medicines and Health Products Price Commission,  the Ministries of Finance and Economic Affairs and the country’s regional governments.

Unfortunately, the legislation still does not include the possibility of antigen tests being sold in supermarkets as is the case in other European countries, with over-the-counter antigen tests still only available in pharmacies in Spain.

“I’ve read criticism that antigen tests aren’t sold in supermarkets. Spain has opted for them to be sold in pharmacies firstly because of the guarantees they provide and secondly because it’s necessary to give the results of these tests to the regions’ public health officials,” Sánchez argued.

While the market was deregulated, pharmacy associations pacted they would keep the price of antigen tests between €6 and €10, but at times of peaks in demand this price bracket has often been surpassed.

“We accept the price fix due to the commitment and vocation to public health and service that’s guided us during these two years of pandemic,” the president of Spain College of Pharmacists Jesús Aguilar said in response to the news.

“The fixed price will lead to the majority of pharmacies to sell tests below the price they paid for them, but as pharmacists we have always put the health of our patients first”.

For Spanish consumer watchdog Facua, pharmacies will continue making a handsome profit given the enormous demand for antigen tests during this sixth wave of the pandemic in Spain. 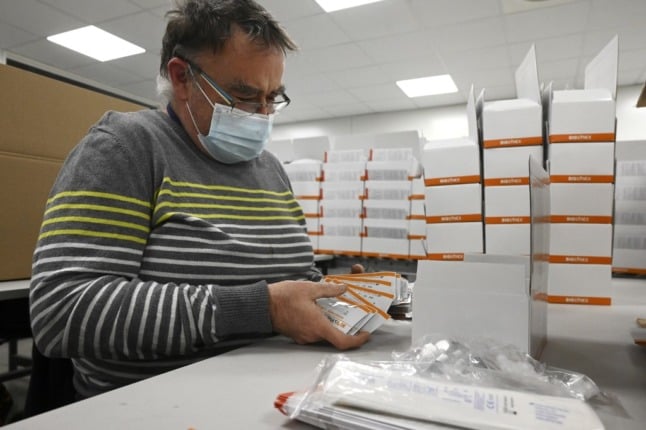 The price of antigen tests has on average doubled over the Christmas period in Spain. Photo: FREDERICK FLORIN / AFP

“Yes, we will,” Sánchez told Spanish radio station Cadena Ser on Monday when asked if his government would regulate the price of antigen tests.

The high demand and at times low supply of antigen tests in Spain has seen the price of antigen tests at least double at many pharmacies over the course of December, from around €4 to €8, in many cases more.

Sales shot up 67 percent in the week before Christmas, equalling seven million antigen tests sold, and ever-increasing Omicron cases are keeping demand up in January 2022.

“I’ve read criticism that antigen tests aren’t sold in supermarkets. Spain has opted for them to be sold in pharmacies firstly because of the guarantees they provide and secondly because it’s necessary to give the results of these tests to the regions’ public health officials,” Sánchez argued.

“There was a bottleneck over the Christmas period due to the exponential increase in demand but lower supply.

“This problem has been resolved and now we will focus on the control of prices of antigen tests,” the Spanish Prime Minister concluded, reminding the public that his government already reduced VAT on antigen tests in 2021.

The other important update by Spain’s socialist leader relates to the purchase in January of 344,000 doses of Pfizer’s new Paxlovid oral antivirals against Covid-19, which Sánchez said will reduce “by 88 percent the possibility of hospitalisation” and death in those who are most vulnerable to the disease, as clinical studies have shown.

Pfizer’s Paxlovid pill has received approval for emergency use by the FDA in the United States for high-risk patients over 12 and by the EMA for adult patients that don’t require supplementary oxygen but are at higher risk of becoming seriously ill with Covid-19.

Paxlovid is the first pill that reportedly stops the symptoms of Covid-19 and will require a medical prescription in Spain.

Pfizer’s clinical results for 2,200 test patients who were at high risk of developing serious Covid-19 and who took the pill found that Paxlovid reduced the risk of hospitalisation or death by 89 percent if taken within three days of the first symptoms and 88 percent within five days.

Another Paxlovid study showed that in people at lower risk of severe disease after contracting Covid-19, the risk of hospitalisation was reduced by 70 percent.

READ ALSO: Where to buy antigen tests in Spain and how much you should be paying