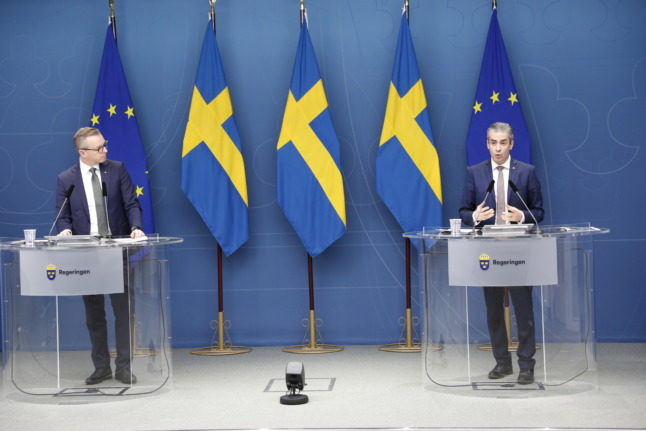 The highest level of compensation will be offered to those using more than 2,000 kWh per month, who will receive 2,000 kronor per month for three months – a total of 6,000 kronor. The proposal is a response to record-high energy bills hitting users across Sweden this winter.

“Not everyone will get compensation. Generally those with detached homes or small homes which are heated by electricity will be covered by this proposal,” Damberg said.

Compensation will be paid out to households with high electricity bills automatically, the government explained, although it will take a few months to come into effect.

“This will take a few months to be introduced,” Damberg said. “You can’t count on getting a lower energy bill in January, February – our proposal can’t make that possible.”

When asked about when homeowners could expect to receive compensation, Farmanbar responded: “We need to talk to electricity companies, authorites and parliament – but I think it will be a few months before we can give a clear answer on what exactly this will look like.”

“We believe it is important that compensation goes to those who really need it,” he continued.

Ministers were unable to give details on what the lower limit of compensation will be at this time, only that it will be offered on a sliding scale, with the maximum level of compensation offered to households using more than 2,000 kWh per month.

Damberg underlined the fact that it is extremely unusual for the state to compensate individual households for market price fluctuations.

“This is an exceptional measure for an exceptional situation,” he said. “We have extremely high energy prices in Sweden and Europe at the moment. The government takes this situation very seriously.”

Have you been affected by Sweden’s record-high energy bills? Get in touch with our editorial team at [email protected].

The party is proposing a high-cost protection or högkostnadsskydd similar to that found in Norway, where the state will commit to covering a percentage of all costs over a certain figure.

It is not yet clear how the system would work, but the Moderates’ finance spokesperson, Elisabeth Svantesson, said it the government should set a price threshold, above which the government would shoulder the majority of any extra cost.

“You could expect the state to pay for 75 percent of the cost of everything over one krona per kilowatt hour,” she suggested, adding that a one krona threshold would cut around 6,000 kronor off the energy bill of an average family in Norrland.

“We can’t completely protect the consumer, but we can make it easier,” she said. “No one should be forced to leave their home this winter because of an electricity bill.”

The cost to the state, if this model were to be adopted, would be around 15 billion kronor for a three-month period, she added.

The Moderates suggest financing the proposal in a number of ways, including taking funds from labour market policy measures which are not currently used, the klimatklivet – a programme providing investments for climate-friendly initiatives, as well as from profits generated by state-owned Swedish power company Vattenfall.

In addition to this, the Moderates are pushing for expansion of Sweden’s nuclear power production, as well as increasing the discount on building solar panels from 15 to 20 percent.

Svantesson also proposed that this discount be expanded to include other environmentally friendly alternatives, such as the installation of air source heat pumps.

“It would both lower electricity consumption and increase electricity production,” she said.

Prime Minister Magdalena Andersson is open to the suggestion, stating that her party would “study the proposal very carefully”.

“We have shown in government during the spring that we are prepared to support households during this difficult time for many,” she said, with a caveat. “It is important to say that we will not be able to compensate for every price increase caused by the war in Ukraine.”