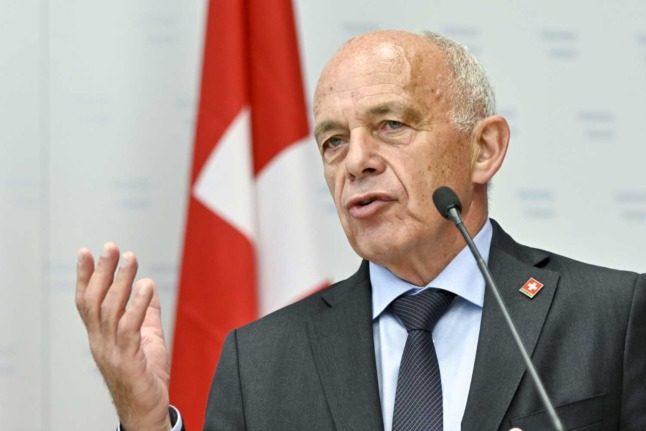 Amid higher case rates than ever seen since the start of the pandemic, the Swiss government will make an announcement on Wednesday regarding Covid measures.

Swiss Finance Minister Ueli Maerer gave hope to those wanting to avoid tighter measures, saying “we have high numbers of infections, but the hospitals remain quiet”.

While the situation is serious in some hospitals and ICUs in Switzerland, hospitalisations have not followed a parallel trend alongside case numbers as they did earlier in the pandemic.

READ MORE: Why hospitalisations in Switzerland are not increasing despite soaring infections

As a consequence, it appears the government will not tighten measures on Wednesday, while there is the possibility some may be relaxed further.

The most likely announcement on Wednesday will be a shortening of the quarantine.

More than 100,000 people are in quarantine across Switzerland at the moment due to this quarantine, which has already begun to wreak havoc on infrastructure, business and essential services who no longer have enough staff.

Maurer told SRF on Sunday “it is actually appropriate that we reconsider the quarantine period.”

Some cantons have shortened the quarantine from ten days to seven days, while Cantonal Health Directors are pushing for it to be further capped at five days.

Maurer said the quarantine for coming into contact with a positive-tested person should be abolished completely, although there have been no further indications the Swiss government intends to do this.

Maurer also gave hope to bar and restaurant owners and patrons, as well as members of sports clubs or fans of amateur sport, when he told SRF no further tightenings were planned in this area.

Again, Maurer said the most important metric was hospitalisations rather than pure case numbers.

Financial support and help for businesses

Businesses which have been negatively impacted by the pandemic may be entitled to greater support, under possible measures published by Switzerland’s NZZ newspaper.

Under the forecast measures, companies can receive support in paying fixed costs they cannot meet – even if these costs arise in the future.

This can be rent, wages or other costs which cannot be easily adjusted.

Any company which applies for such funds will need to show they have tried to take steps to improve their financial situation while they must also provide evidence of the costs themselves.

After a relative lull in the pandemic in the spring, Covid-19 cases surged at the beginning of the summer, driven by new, fast-spreading Omicron sub-variants.

The weekly reports on the epidemiological situation from the Federal Office of Public Health (FOPH) show that the number of new cases kept steadily increasing until about the middle of July, when it peaked at about 56,000 new cases reported in Switzerland in a single week.

From then on, the numbers have been dropping steadily, with 18,204 new infections recorded this week.

What can we expect in the coming weeks and months?

One thing we have learned in the past two and a half years is that coronaviruses are unpredictable, and their evolution (or the emergence of new sub-variants) can’t be forecast with a high degree of certainty.

For instance, health experts did not foresee this summer’s outbreak, believing – based on the experiences of previous waves – that infections are more common in the autumn and winter when cold weather drives people indoors.

READ MORE: ‘Over a million people’ in Switzerland could be infected with Covid this summer

It is also difficult to predict what new sub-variants and mutations could emerge in the future, or what properties they will have.

Next wave and hospitals

Health officials in neighbouring France believe that a surge of Covid cases in the autumn is ‘virtually certain’.

Given the geographic proximity and the flow of people between the two countries, it is reasonable to expect the same scenario to unfold in Switzerland as well.

However, Swiss experts say they believe that even if there is a new wave, most people will have only mild or moderate symptoms.

“The most recent data shows that 97 percent of the adult population in Switzerland has antibodies against Covid thanks to vaccinations and previous infections”, said Tanya Stadler, former head of the Covid-19 Task Force.

Based on the current evolution and forecasts, authorities say they don’t expect the health system to be overloaded with new Covid patients.

This is because “circulating sub-variants of Omicron do not cause more severe forms of the disease than the previous sub-variants”, the government said.

A second booster shot of the Covid vaccine (representing a fourth dose for most people) is already available to people in high-risk groups, but while authorities are urging people to get vaccinated, they also say that if Omicron remains the dominant variant, no mass vaccinations will be needed in the near future.

“The current vaccine does not provide clear protection against the Omicron”, according to Giuseppe Pantaleo, head of the immunology unit at Vaud university hospital (CHUV).

That may change soon, however: both Pfizer and Moderna have asked Switzerland’s drug regulatory body, Swissmedic, to authorise their Omicron-adapted vaccines.

The agency is now reviewing the applications but once approved,  the new vaccines are expected to be used for the second round of booster shots, with the rollout for general public to begin sometime in the fall.

READ MORE: Covid boosters not available in Switzerland until autumn