Want to shop in Germany? These are some rules that you need to know. Photo by Michael Förtsch on Unsplash

Cross-border commerce makes up an important part of the economy in both Switzerland and Germany.

Lower prices and greater variety across the German border have prompted Swiss residents to head north to shop for decades.

For many border residents, the notion that they are crossing an international border is often soon forgotten.

READ MORE: 13 things that are actually ‘cheaper’ in Switzerland

Indeed, the onset of the Covid pandemic in 2020 was the first instance in many people’s lifetimes when the border was closed.

However, while cross-border shopping is a part of life for tens of thousands of border residents, there are still rules to be followed.

Covid-19 measures have been put in place, while customs in both Germany and Switzerland have rules which impact the amount of tax that must be paid.

In Germany, measures are put in place at both the federal and state level.

As the only German state to share a border with Switzerland is Baden-Württemberg, these rules will be considered.

Entering the state for less than a day is allowed and you will not need to fill in an entry form to register your visit.

However, all entrants to Germany over the age of six must be in compliance with the 3G rule. This requires everyone to be either vaccinated, recovered or have tested negative for Covid.

The negative test must be within the past 72 hours (PCR) or 48 hours (antigen) and must be in German, English, French, Italian or Spanish.

Your Swiss Covid certificate will be accepted for entry.

All shopping and hospitality venues require a FFP2 mask. Bars and restaurants must close at 10:30pm.

From Wednesday, January 12th, visiting bars and restaurants will require compliance with the 2G-Plus rule.

This rule requires people to either have received a booster vaccination or to be fully vaccinated and in possession of a negative test. Those who have recently recovered from Covid can also enter provided they show a negative test.

Unvaccinated people and those who have not recently recovered from the virus are shut out of non-essential retail stores such as clothing and gift shops.

When bringing goods into Switzerland, you will need to pay VAT if the amount exceeds 300 francs.

While border patrols are rare, those who make a habit of exceeding this amount – even if it is for goods for personal use – run the risk of falling foul of the authorities.

There are several different rules in place for bringing in different items, including meats, cheeses and alcohol.

The limits for each of these items can be found here.

Keep in mind that while the CHF300 applies now, Switzerland is set to reduce this to CHF50 in the future – although final approval of this has not yet been secured.

Swiss residents are entitled to tax free shopping in Germany, as Switzerland is a non-EU country.

In order to qualify for the tax exemption, you must bring the goods back to Switzerland with you.

The specific rules for this are laid out by German Customs here, but they need to be either in your carry on or checked baggage, or in a car that you are travelling in personally.

These rules are to ensure people are buying the goods for themselves rather than intending to sell them on.

The tax exemption only applies to purchases over 50 euros.

You will need to pay the total amount, before asking for reimbursement once you have exported the goods.

More information on how to get the money reimbursed can be found in English at the following link.

In almost all the international cost of living rankings, Switzerland comes near the top. Sometimes it competes for the “winner’s spot” with Nordic countries like Norway or Iceland, but any way you look at it, you need lots of money to live here comfortably.

Have you ever heard anyone (other than possibly multi-millionaires) saying “Hey, let’s spend our vacation in Switzerland. It’s really cheap there”.

There is a number of reasons why the country is so costly, which are detailed in this article:

EXPLAINED: Why is Switzerland so expensive?

But if you look beyond the sheer statistics, Switzerland does not fare quite as badly – particularly as a place to live.

Here’s why Switzerland isn’t as expensive as we may think.

The Covid pandemic and the war in Ukraine have pushed worldwide inflation rates upward.

While in Euro zone countries this rate stands at 8.1 percent as at May 31, in Switzerland it is a much lower 2.6 percent.

There are many reasons why Switzerland is withstanding inflationary trends better than other countries — at least so far — including the strong franc, which makes imports (though not exports) cheaper.

While prices here are going up due to reasons cited above, the increase is not as drastic as elsewhere in Europe.

READ MORE: EXPLAINED: Why Switzerland has escaped the global spike in costs of living

Overall, the strength of Switzerland’s economy, which withstood the pandemic much better than other countries, is worth its weight in gold —and not just literally.

“Even in a time of crisis, Switzerland scores thanks to its stability, predictability and security”, said Patrik Wermelinger, member of the executive board of Switzerland Global Enterprise (SGE), which promotes the country abroad on behalf of the federal government and the cantons.

Right now Switzerland’s unemployment rate is just over 2 percent, while it is 6. 8 percent across the EU. Looking specifically at neighbour countries, it is 7.3 percent in France, 8.4 in Italy, 5 percent in Germany, and 5.7 percent in Austria.

What exactly does all this have to do with the cost of living in Switzerland?

The country’s resilience to global crises means people remain employed, and employed people can afford to buy at least the basic necessities.

Right now, “the market situation is very positive for employees…Skilled workers are scarce and the shortage cannot simply be filled by workers from neighbouring countries”, according to Peter Unternährer, Manpower’s regional director for central and eastern Switzerland.

READ MORE: Employment: This is where Switzerland’s jobs are right now

Okay, so your monthly income per se means nothing unless you convert it into its purchasing power.

In Switzerland, high wages are eaten up by high prices — at least that’s what many people will tell you and we won’t argue with that.

But wait before you jump to this conclusion, let’s talk about McDonald’s and its Big Mac burger (yes, you heard us right — a Big Mac burger).

The Economist magazine’s Big Mac Index is a globally accepted metric which compares how much this burger costs in every country.

However if you take a minimum hourly wage, say 20 francs, an average worker could buy three burgers for his hourly wage.

As a comparison, in the USA, where the Big Mac costs $5.81 (again, according to the index) but the median minimum salary on federal level is $7.25 per hour,  an average worker could have just over one burger for an hour’s work.

All this is to say that things are not always what they seem.

Some things in Switzerland are (comparatively) cheap

Although “Switzerland” and “cheap” should never be used in the same sentence, the fact is that some things here are actually reasonably priced.

For instance, the Value Added Tax (VAT) is 7.7 percent here, while it is much higher throughout Europe, as the  chart below shows. 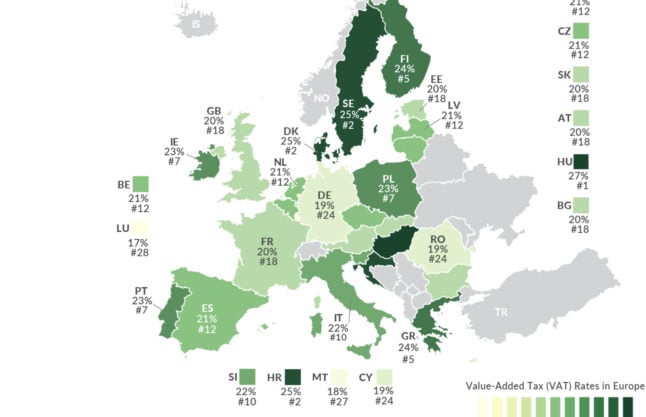 Because of that, prices of some goods, like electronics, are lower in Switzerland than in many European countries.

Also, the tuition fees at Swiss universities are low by the standards of many other countries. At the prestigious ETH technical institute in Zurich, for example, tuition and semester fees total 649 francs a semester.

And let’s not forget about taxes.

READ MORE: 13 things that are actually ‘cheaper’ in Switzerland 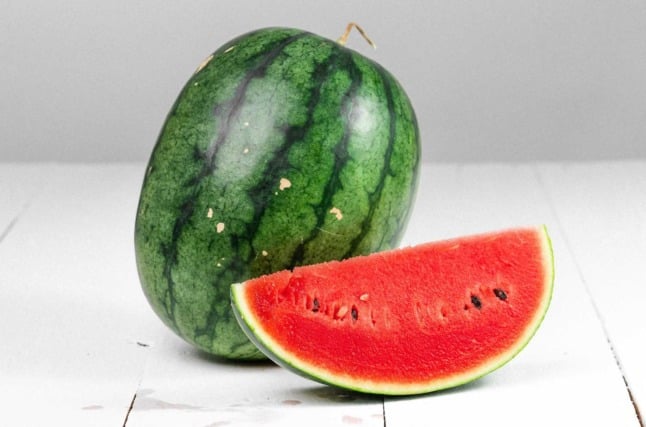