Women in Madrid aged under 45 will be able to have four IVF attempts from now on. Photo: Martin BUREAU / AFP

Women in Spain become mothers at a later age than all their European counterparts, EU data shows, with the average Spanish woman having 1.34 children.

Another study released in March 2021 found that the pandemic had made Spain’s birth rate drop further still to its lowest level in 80 years, and Spain’s National Statistics Institute estimates the country could lose five million inhabitants in the next 50 years, with immigration currently proving to be the best remedy to this population loss.

With all these stats in mind, Madrid’s regional president Isabel Díaz Ayuso announced on Monday that she would tackle her region’s “demographic challenge” with the “greatest plan to boost the birth rate” yet, as well as measures to address the family-work balance, to be launched on January 26th.

With an investment of €4.5 billion over the next five years, the standout measure of the 80 to be introduced is that the age limit for women to access free in vitro fertilisation through the public healthcare system in Madrid will go from 40 to 45 years.

The number of available attempts through public hospitals will be expanded from two to four attempts per woman.

The legal age limit for IVF to be done privately in Spain is 50 years old.

According to the website eggonationfriends.com, “Spain is the most expensive European IVF destination – due to both very high standards of treatment and the wide availability of donors. The cost of a single own egg IVF cycle ranges from €4,100 to €8,200 while an egg donation cycle may cost from €5,900 to €11,000.”

The Community of Madrid’s new IVF treatment will also now be made available to women who already have another child.  Two new IVF units will be created and Madrid’s first ovocyte egg bank will be set up.

“Each person will be able choose the centre among the seven currently available, with a single shared waiting list,” Ayuso told journalists on Monday. Waiting times from the first checkup to the actual IVF treatment currently vary from two to four years depending on the Madrid hospital.

According to stats published by Spain’s Health Ministry and the Spanish Fertility Society (SEF), a total of 180,906 fertility treatments were carried out in Spain in 2019, of which 37,428 babies were born.

Among the 80 measures which are yet to be fully revealed is the already implemented financial aid scheme in Madrid which grants €500 per month per baby to mothers under 30 with yearly earnings below €30,000.

In addition, there will be an extension of deductions of up to €2,100 in parents’ Personal Income Tax for the birth or adoption of a child over the first three years and a flat rate for self-employed women who return to work after motherhood.

Other measures for new mothers in the Spanish capital include making the work days more flexible, giving them tax incentives for property purchases or rent and priority access to the region’s rental VIVE Plan.

Ayuso has requested “the  involvement of the National Government, which is the one with broad powers, since many of the family and work balance measures require dialogue with the companies”.

Madrid’s regional president will request that Sánchez’s government implement a reduction of at least 50 percent of the employer’s social security quota for workers who join after parental leave and more tax incentives for bosses who give more flexibility to workers with children under the age of 12. 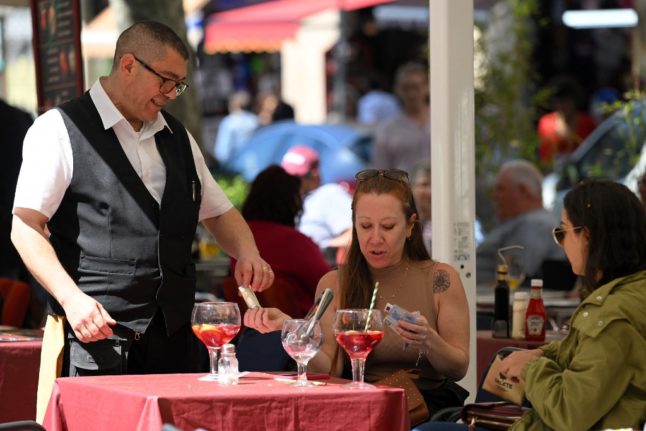 Spain may be the land of sobremesas – the concept of dragging out post-meal get-togethers as the conversation between friends and family members flows – but an increasing number of café, bar and restaurant owners are now looking to put a stop to this in their premises.

As Spain emerged from its Covid-19 lockdown and endured two years of domestic restrictions, many people within the hospitality sector looked for ways to recoup their losses.

First, there were the ‘coronavirus service charges’ added to people’s bills (which consumer watchdog FACUA dubbed illegal), then a general rise in prices that’s recently been exacerbated by spiralling inflation, and to an increasing extent now, putting time limits on how long customers can stay, especially in bar and restaurant terraces.

To be clear, there were already establishments that set a time limit prior to Covid-19, in particular popular ones where booking a table was required. But it was during the period of restrictions on indoor seating for the hospitality sector that many business owners began to set limits on how long customers could spend at the terrace table as their overall seating was considerably reduced.

After two years of limitations on socialising and eating out, Spaniards are now going out en masse during the sweltering summer, resulting in an even bigger rise in the number of bars and restaurants that start the stopwatch as soon as customers sit down.

To have a drink, the limit is often 30 minutes. For those sitting down for a meal, it’s usually an hour and a half, or even just one hour.

The practice is most prevalent in Barcelona and Bilbao.

The reason for these time limitations which are so contrary to the Spanish way of life is of course money, the reasoning behind it being that the longer a person or group sits at a table without eating or drinking anything, the higher the chances that new customers won’t be able to sit down and spend.

Spanish newspaper EPE even found that some restaurants in Barcelona don’t serve customers who are on their own or couples as they can’t make as much money out of them as from larger groups.

Then there are establishments that don’t allow people to sit at a table at la terraza after a certain time unless it’s to have lunch or dinner; some even expect customers to spend a “minimum amount” to enjoy their al fresco premises.

Opinions among Spaniards on table time limitations are fairly divided.

There are those who understand that business owners are struggling to make a profit given the rise in costs of products, gas and electricity (perhaps from their own experience of working in the hospitality industry), whilst other Spaniards find the whole experience of being rushed when they’re trying to relax and enjoy to be unfair, believing that the owners’ reasoning is mainly based on greed and financial gain. 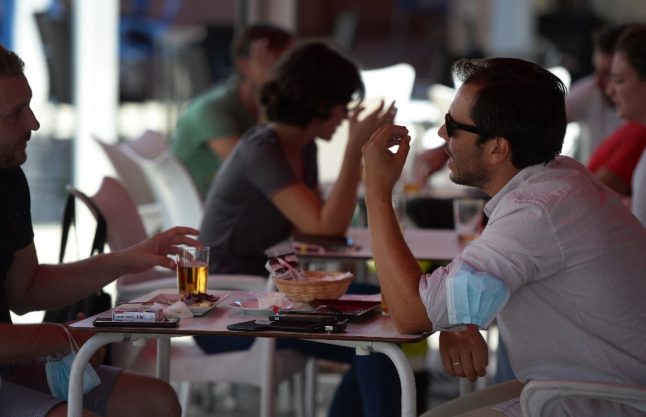 Consumer rights groups agree that customers should be forewarned for table time limits to be considered legal in Spain. (Photo by CRISTINA QUICLER / AFP)

Is it legal for Spain’s bars, restaurants and cafés to set time limits on paying customers?

If an establishment notifies the customer upon arrival or has a sign informing them of the time limit, then it is considered legal by consumer rights groups OCU and FACUA.

However, if the methods used by the waiters or owners are underhand, then the legality of the practice is questionable.

According to FACUA spokesperson Rubén Sánchez, “it’s one thing to be notified in advance when booking or arriving, and quite another when you’re already there (eating and drinking) and they try to kick you out”.

“Everything is subject to interpretation”, he adds, as if someone only orders a coffee and sits at a terrace table for five hours at a busy time it’s understandable that restaurant or bar owners will be concerned, but if you’re going to spend €100 or more, then the last thing you want is to be told you have to get up and go after one hour.

It’s also important for table time limits to be clearly signposted and in a visible place, especially if the waiters don’t inform customers beforehand, otherwise Sánchez deems the practice illegal.

Furthermore, there’s the speed at which food and drinks are brought out, as if this takes very long, it’s a tough ask to expect customers to rush.

“What it’s about is weighing up the rights of each side, but not expecting customers to finish eating in just half an hour,” Sánchez concludes.

“I don’t believe that these types of formulas will find much success. It’s about treating each other with respect, every customer has to evaluate their own case.

“If the time limits aren’t applied properly it could end up being really chaotic”.