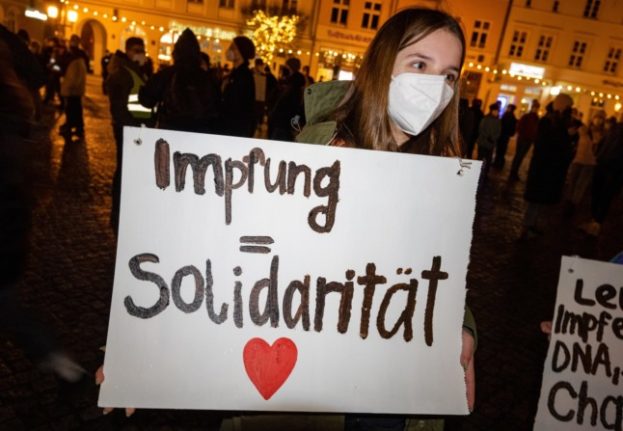 Scholz, who recently took over as chancellor from Angela Merkel, in late November touted compulsory jabs for all adults as the surest way out of the pandemic.

The centre-left Social Democrat asked MPs in the lower of house parliament to draft the necessary legislation with the goal of introducing the measure in “late February or early March”.

Little progress has been made since then however, and the fast-spreading but less severe Omicron strain has raised fresh doubts about the project, particularly among the pro-business FDP party.

Speaking after a meeting with the leaders of Germany’s 16 states on tighter coronavirus curbs, Scholz reiterated that “it would be good if we ended up with a general vaccine mandate”.

He said all of Germany’s state premiers had declared their backing for the plan.

“I feel fully supported” by them, he said.

The same cannot be said for the FDP, who along with the Greens make up Scholz’s three-way coalition government.

Although coronavirus cases are rising, Germany has so far been spared the steep Omicron surge that has swept other nations — prompting Justice Minister Marco Buschmann from the FDP to call for a wait-and-see approach on a general vaccine mandate.

FDP chief Christian Lindner said new findings “could play a role in the decision”, in a nod to Omicron infecting even the triple jabbed, and studies suggesting a lower hospitalisation rate than with the Delta variant.

“Protecting human health and life is highly desirable. But our greatest asset… is and remains our freedom,” he said on Thursday.

Germany’s first parliamentary debate on compulsory jabs is only scheduled for late January, even though Scholz himself had originally aimed to have lawmakers discuss the issue before 2021 was out.

This has fuelled speculation that Scholz won’t be able to stick to his timetable for introducing the measure.

“The longer the discussion about mandatory vaccinations lasts… the more the project wobbles,” wrote Sueddeutsche newspaper and Der Spiegel weekly called it “a headless project without a plan”.

Hundreds, at times thousands, of protesters have taken to the streets to rail against the government’s Covid approach and vaccine plan in recent weeks, occasionally resulting in clashes with police.

Austrian example
Although it is home to BioNTech, the company that co-created the widely used Comirnaty vaccine, with just over 71 percent of the population double jabbed, Germany has a lower coronavirus vaccination rate than France, Italy or Spain as shown in the below chart from Our World in Data. Almost 42 percent of Germans have had their booster shot, considered crucial in the fight against Omicron.

Like several other countries, Germany has already announced vaccine mandates for those in certain professions, including soldiers and health workers.

Neighbouring Austria has gone further and is on the verge of introducing a general vaccine mandate, in what could be the first in Europe.

While it has stirred controversy there too, the measure is backed by all the political parties except Austria’s far-right FPOe.

‘Sensitive topic’
A government spokeswoman on Friday rejected media suggestions that Scholz has lost the grip on his timetable, saying mandatory vaccination was a “sensitive topic” that merited a “public and wide” discussion.

Several MPs from the FDP, a party traditionally in favour of low government intervention, have said they will table a motion against the plan.

FDP lawmaker and health expert Andrew Ullmann suggested a compromise, saying he would propose mandatory jabs for the over-50s only, after Italy’s example.

The opposition meanwhile has attacked Scholz for passing the buck to parliament instead of having the government spearhead the draft legislation.

“We need speed and leadership,” said Hendrik Wuest, the premier of North Rhine-Westphalia state from the centre-right CDU, cautioning against “political manoeuvring” in the battle against the pandemic.

Health Minister Karl Lauterbach, an epidemiologist from Scholz’s Social Democrats, said compulsory jabs had to come quickly to avoid the worst of what Omicron — and future variants — could have in store.

Hoping that Omicron would spread so rapidly that the vaccine debate becomes “obsolete” would be a mistake, he told Spiegel.

Even with Omicron, patients could suffer severe illness and lasting damage, he said.

“A lot of unvaccinated people would die.”

“Mandatory vaccination is the path that’s necessary for Germany,” he told broadcaster RTL.

“There is no legislative majority in the Bundestag for compulsory vaccination,” he said on Thursday evening after consultations with the leaders of the federal states in Berlin.

Expressing his regret at the lack of support for the move, he said this reality would have to be the “starting point” for any future vaccination drives.

“I am, of course, disappointed that there was no majority today, I don’t want to hide that at all,” said Scholz. “I am still convinced that it would be right to have compulsory vaccination in Germany. With the Bundestag decision, however, a very clear statement by the legislator had now been made.”

Despite the fact that Covid-19 vaccines have been available in Germany for more than a year, around 24 percent of the population still have no vaccine protection whatsoever.

Of these, around 4-5 percent are too young to get the Covid vaccine, but around 20 percent are either against the idea or still on the fence.

“We will do everything we can to convince even more citizens of this country to get vaccinated,” Scholz told reporters. “This will require our creativity.”

On Thursday, a bill for compulsory vaccination for everyone over the age of 60 was voted down in the Bundestag, dealing a painful blow to its supporters in the traffic-light coalition.

The bill had been promoted primarily by SPD and Green MPs, including Scholz himself and Federal Health Minister Karl Lauterbach (SPD). A motion from the opposition CDU/CSU parties to introduce a vaccine register and potential target vaccine mandates was also rejected by the house.

Scholz is not alone in ruling out the possibility of reviving the vaccine mandate issue.

Speaking to Tagesschau in Berlin, Health Minister Karl Lauterbach said the failure of the bill had been a “bitter defeat” that made it unlikely that any future bill on the subject would gain enough support to succeed.

“It’s a clear result that has to be lived with,” he said. “I’m sceptical about whether we can still achieve anything through additional talks.”

In a democracy, he said, this had to be respected.

But he explained that the failure of compulsory vaccination is bad news for vulnerable patients, for those who work to treat and care for Covid patients, and for all those who have to live with restrictions. A new wave of infections is likely by autumn at the latest, Lauterbach said.