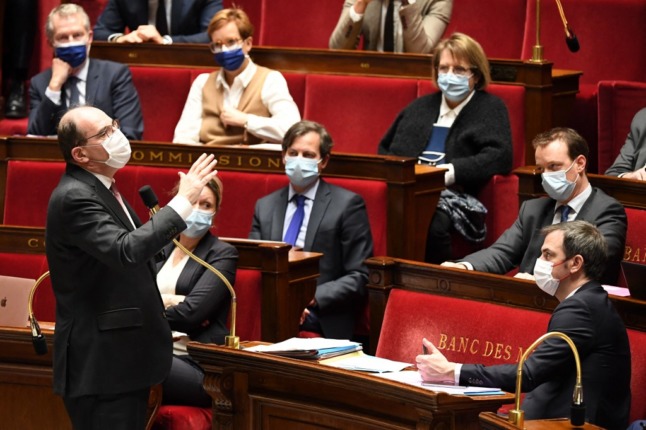 MPs debated the bill into the early hours of Thursday. Photo: Bertrand Guay/AFP

After long hours of debate, MPs in the Assemblée nationale voted in the early hours of Thursday to approve the bill by 214 votes against 93, and 27 abstentions.

The bill will now move to the Senate, although within the French parliamentary system, the Assemblée nationale has the final say in the event that the two houses cannot agree.

The debate on the controversial bill has been halted twice – once on Monday when MPs protested they did not have enough time and again on Wednesday in reaction to Emmanuel Macron’s comment that he wanted to “piss off” the unvaccinated.

This means that the government’s desired start date for the pass on January 15th is likely to be slightly delayed.

Since the summer France has used the pass sanitaire (health pass) which requires visitors aged 12 and over to present proof of either vaccination, recent recovery from Covid or a recent negative test in order to access a wide range of venues including bars, cafés, restaurants, gyms, leisure centres, cinemas, theatres, museums, tourist sites and long distance train travel.

The system for using a negative test has been tightened and now tests are valid for just 24 hours and have to be paid for at €22 a time.

However once the health pass becomes a vaccine pass, tests would not be accepted and only proof of being fully vaccinated – which now includes having a booster shot for those eligible – could be used.

Health minister Olivier Véran said that the law “responds to the epidemic recovery in an effective, graduated manner. It makes the choice of science and responsibility”.

France has one of the highest vaccination rates in the world, with 90 percent of the eligible population vaccinated. However there are still 5 million over 12s who have not received the vaccine, and the government intends the vaccine pass to put pressure on them by denying them access to fun, social and leisure activities.

Vaccination in France is currently compulsory only for healthworkers, but the vaccine pass will in effect force people who work in health pass venues such as cafés and gyms to get vaccinated, or be unable to work.

Ulf Kristersson, leader of the Moderate Party, said that there should not be a repeat of the situation seen in last two mandate periods, where the Social Democrats have twice had to rule on a budget drawn up by the right-wing opposition.

It was unclear whether this was a serious proposal or a gambit intended to underline the weakness of the government in the run-up to Sweden’s general election in September.

Securing support for economic policies is arguably more of a challenge for Magdalena Andersson, as two of the parties likely to support her as Prime Minister after the election, the Centre Party and the Left Party, are deeply divided on economic politics, even though they are united on their unwillingness to back a government dependent on the populist Sweden Democrats.

The Centre Party has supported Andersson as Prime Minister without voting for the Social Democrats’ budget.

Kristersson’s call comes after the Social Democrats on Wednesday called for its own budget proposition to fall after a compromise on pensions agreed with the Centre Party was blocked by the parliament’s finance committee from being put before parliament.

“This was a graphic example of the government’s impotence and the decay of government power,” he said.

Sweden’s prime minister, Magdalena Andersson, did not respond to Kristersson’s proposal, but pointed out that after the last election he had failed to establish a government at all.

“I think that many among the Swedish people wonder what is happening in parliament just now and think that it is chaotic and incomprehensible,” she said. “My ambition is to establish a government that can get through its economic policies.”