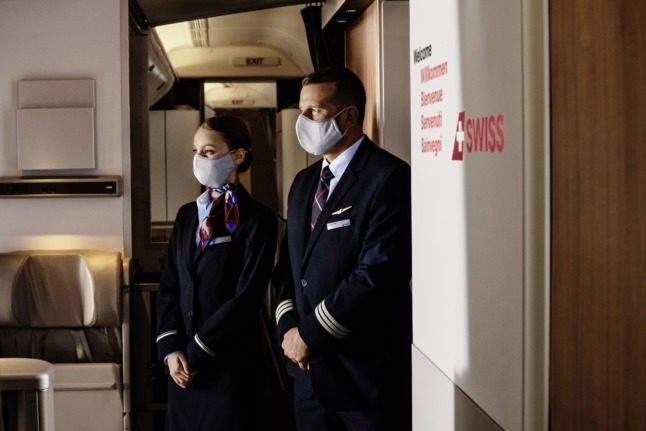 Switzerland’s national airline has no staff shortages at the moment. Photo: SWISS

As the highly contagious Omicron variant continues to spread rapidly through the country, it impacts not only the epidemiological situation, but also the economy.

Absenteeism in essential industries is particularly high and is placing Switzerland’s critical infrastructure at risk.

As at January 4th, 70,302 infected people are in isolation, and additional 31,281 are in quarantine after a close contact with a contaminated person, according to Federal Office of Public Health.

In total, over 101,500 individuals are currently confined and the number is expected to increase, health officials say.

This means that many service industries are missing employees and some are already feeling the impact of the shortage.

There are, for instance, fewer Tilo trains in Ticino, which connect the canton with cities in the Italian region of Lombardy.

Due to sick train drivers who are absent, services between Chiasso and Como, and between Como and Varese are cancelled.

Luxury hotels have been forced to close due to staff shortages.

To avoid such drastic situations, a number of essential businesses is setting up emergency plans to ensure they keep functioning despite staff shortages.

Large retailers Migros and Coop have assured everyone that they will continue their operations.

Migros set up a Switzerland-wide crisis unit already during the first wave in February 2020, according to company spokesperson.

Coop also has implemented a series of additional measures, in addition to existing concepts that have been deployed at the height of the pandemic.

In both cases, warehouses are well stocked, so the supply of food and other essential items — including, yes, toilet paper — is not threatened.

One of the worst-case scenarios is that Switzerland’s healthcare system, which is already on the brink of saturation, will be further burdened by lack of workers.

Medical facilities are getting ready for such a possibility.

Kristian Schneider, director of the Biel Hospital Center, said in an interview with public broadcaster RTS on Wednesday morning that his establishment has implemented plans on several levels.

“We have requested help from the army, and created teams A and B — one team will stay at home but will be ready to intervene.”

Swiss Federal Railways (SBB) are preparing different scenarios to be deployed, depending on the evolution of the health situation within the company, but no details are given.

As of Wednesday, train services between Zurich and Bern have been cut due to staff shortages.

At SWISS airlines, staff reserves are planned for weekends but the airline hasn’t noticed any shortages of flight personnel for the time being.

Even in the event of significant absences, the Post will activate its internal job exchange in order to deploy employees from other departments or temporary workers.

And as a last resort, the Post could rely on the help of civil protection.

Telecom companies will not be significantly affected by staff shortages.

At Swisscom, large part of the staff already work in home offices. In addition, the company said it has emergency and crisis management plans adapted to different levels of service, if needed.

Employees at Sunrise UPC and Salt also have the home working obligation, which reduces the risk of widespread staff absences.

In terms of drug deliveries, delays cannot be ruled out, according to Swiss medical wholesaler Galenica.

However, companies affiliated with the Galenica group have put in place emergency measures to be used in case of Covid-related staff absences: smaller logistics activities will be cut back and the resources will then be allocated to the delivery of medicines, company spokesperson said.

Additionally, cross-industry staff shortages could be at least partially alleviated with the new, reduced quarantine measures.

Most cantons, with the exception of Graubünden and Aargau as at January 5th, have reduced their quarantine time for contact cases from 10 to seven days.

Infected people, however, must still remain in isolation for 10 days.

Several Western European nations have recently recorded their highest daily case numbers in months, due in part to Omicron sub-variants BA.4 and BA.5.

The increase in cases has spurred calls for increased vigilance across a continent that has relaxed most if not all coronavirus restrictions.

The first resurgence came in May in Portugal, where BA.5 propelled a wave that hit almost 30,000 cases a day at the beginning of June. That wave has since started to subside, however.

Italy recorded more than 62,700 cases on Tuesday, nearly doubling the number from the previous week, the health ministry said.

France recorded over 95,000 cases on Tuesday, its highest daily number since late April, representing a 45-percent increase in just a week.

Austria this Wednesday recorded more than 10,000 for the first time since April.

Cases have also surged in Britain, where there has been a seven-fold increase in Omicron reinfection, according to the Office for National Statistics (ONS).

The ONS blamed the rise on the BA.4 and BA.5 variants, but also said Covid fell to the sixth most common cause of death in May, accounting for 3.3 percent of all deaths in England and Wales.

Mircea Sofonea, an epidemiologist at the University of Montpellier, said Covid’s European summer wave could be explained by two factors.

One is declining immunity, because “the protection conferred by an infection or a vaccine dose decreases in time,” he told AFP.

The other came down to the new subvariants BA.4 and particularly BA.5, which are spreading more quickly because they appear to be both more contagious and better able to escape immunity.

Olivier Schwartz, head of the virus and immunity unit at the Pasteur Institute in Paris, said BA.5 was “taking over” because it is 10 percent more contagious than BA.2.

“We are faced with a continuous evolution of the virus, which encounters people who already have antibodies — because they have been previously infected or vaccinated — and then must find a selective advantage to be able to sneak in,” he said.

READ ALSO: Tourists: What to do if you test positive for Covid in France

But are the new subvariants more severe?

“Based on limited data, there is no evidence of BA.4 and BA.5 being associated with increased infection severity compared to the circulating variants BA.1 and BA.2,” the European Centre for Disease Prevention and Control (ECDC) said last week.

But rising cases can result in increasing hospitalisations and deaths, the ECDC warned.

Could masks be making a comeback over summer? (Photo by OSCAR DEL POZO / AFP)

Alain Fischer, who coordinates France’s pandemic vaccine strategy, warned that the country’s hospitalisations had begun to rise, which would likely lead to more intensive care admissions and eventually more deaths.

However, in Germany, virologist Klaus Stohr told the ZDF channel that “nothing dramatic will happen in the intensive care units in hospitals”.

Return of the mask?

The ECDC called on European countries to “remain vigilant” by maintaining testing and surveillance systems.

“It is expected that additional booster doses will be needed for those groups most at risk of severe disease, in anticipation of future waves,” it added.

“I want to continue to recommend protecting yourself by getting a second booster shot,” said Italy’s Health Minister Roberto Speranza, who recently tested positive for Covid.

Fischer said France had “clearly insufficient vaccination rates” and that a second booster shot was needed.

Germany’s government is waiting on expert advice on June 30 to decide whether to reimpose mandatory mask-wearing rules indoors.

The chairman of the World Medical Association, German doctor Frank Ulrich Montgomery, has recommended a “toolbox” against the Covid wave that includes mask-wearing, vaccination and limiting the number of contacts.