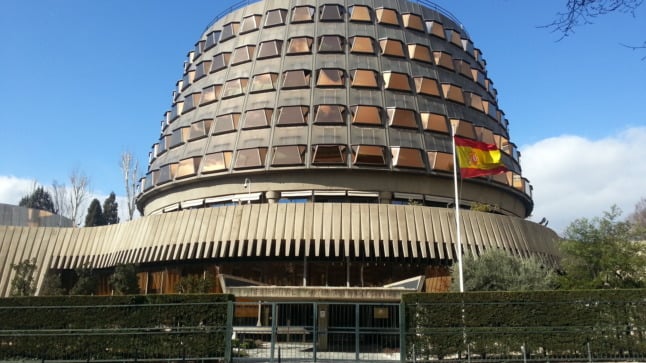 In a bizarre legal case, Spain’s Constitutional Court has rejected the appeal of a Spanish woman who filed a sexual abuse and coercion complaint against her ex-brother-in-law at the Provincial Court of Palma de Mallorca in late December.

She explained how due to financial difficulties she had asked her ex-husband’s brother, with whom she’d maintained a good relationship, to transfer the money to her account, something he agreed to do without initially stipulating when and how she should pay him back.

At a later date, the man reportedly told her that due to the favour she owed, she had to give him “two or three blow jobs a week and be his floozy whilst the debt was outstanding”, something she felt “psychologically obliged to do” and went ahead with on five occasions.

The accused, 58, maintained his innocence, arguing that they’d reached “a deal to have sexual relations in return for lending her €15,000 without interest” and that “demanding compliance with a previously accepted deal does not constitute a crime”.

He told the court that when his ex-sister-in-law changed her mind about the sexual encounters and he asked her for financial reimbursement instead, only then dud she decide to file a complaint. The woman for her part also accused her former relative of sending her a letter in which he wrote “either you pay or I’ll sue you”.

The Balearic judge found no evidence of sexual abuse or coercion, concluding that “it was a freely agreed relationship” between the two and that the arrangement ceased “when there was no consent” on the woman’s behalf, without this opposition having “any consequence other than claiming the debt”.

When the plaintiff then decided to appeal the matter at Spain’s Constitutional Court, judges again washed their hands of it, arguing that the case did not justify “special constitutional significance”, one of the requirements that protection claims must meet in order to be accepted.

In other words, Spain’s Constitutional Court, an independent body from the State which has the final say on all matters relating to fundamental rights and breaches of them, doesn’t necessarily consider that paying back financial debt in sexual favours is illegal if agreed to by both parties.

For some legal sources, the fact that they’ve shelved the appeal does not mean that Spain’s Constitutional Court endorses oral sex as a form of payment as they have not actually delivered any verdict on the matter.

The same applies to the Balearic high court’s decision, as their ruling referred to whether the man’s actions represented sexual abuse or coercion, not wether sexual acts are a legal means of debt payment.

The case is being handled by the Audiencia Nacional, Spain’s top criminal court, with the judge in charge asking that “two doctors conduct a psychiatric evaluation of the suspect”.

The suspect, 25-year-old Yassine Kanjaa, was arrested at the scene after the attacks on two churches in the southern town of Algeciras last week.

The Audiencia Nacional said the psychiatric evaluation, which will be carried out by doctors from the court’s forensic department, would provide “information about the legal responsibility” of the “presumed jihadist”.

Prosecutors have opened a terror probe and, on Monday, the court remanded the suspect in custody without bail on murder and terrorism charges.

During the deadly incident on January 26th, the suspect entered San Isidro church and attacked its priest with a machete, leaving him seriously wounded before entering Nuestra Señora de La Palma.

There he attacked the verger and chased him out of the church where he killed him.

Court details released on Monday said the attacker had also injured three other people, including another Moroccan man whom he “considered an infidel” because he had renounced his faith.

It said Kanjaa’s actions could be “qualified as a jihadist attack directed at both priests who profess the Catholic faith, and Muslims who, according to the suspect, don’t follow the Koran”.

The court said the suspect fits the profile of a “self-indoctrinated terrorist who acts individually without direct ties to a specific terror group but operates in the name of jihadist philosophy”.

Last week, Spain’s left-wing government refused to rule out mental illness and the police have described him as “unstable”.

The court said Kanjaa became indoctrinated “rapidly” within the space of up to six weeks, citing witnesses as telling police that just before that, he “was drinking alcohol and smoking hashish”. Then he suddenly started listening “regularly to the Koran on his mobile phone”.

One of Kanjaa’s neighbours told AFP something similar on Friday, saying he had changed radically six weeks ago, growing a beard and wearing a long robe.

Officials have said Kanjaa was served with a deportation order last June but had no prior convictions and was not under surveillance.