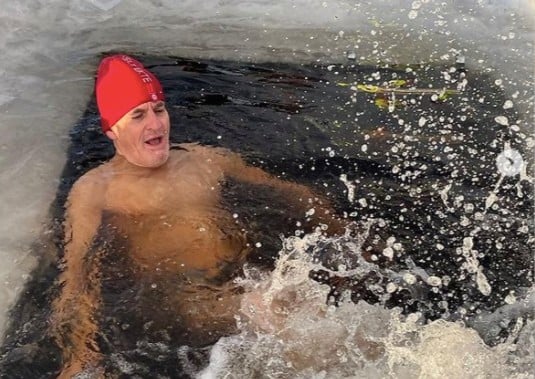 Wearing nothing but a warm hat and bathing trunks, the Labour party leader first prepared himself psychologically, sitting at the edge of a rectangular hole cut into the ice on a lake in Numedal, an hour outside Oslo, where temperatures on Friday afternoon hovered around -7C.

“Sometimes, you just have to jump in,” he wrote, next to a picture showing him completely submerged under the water, posted on Instagram. He then lay in the water for some time before clambering out.

“It was really bracing, but not so discouragingly cold as some other times when I’ve done it,” Støre told the VG newspaper.

According to the paper, the New Year’s Eve dip at Numedal is a longstanding tradition for Støre.

Richard Wood, British ambassador to Norway, praised the Norwegian leader for his “admirable” toughness, while admitting to himself being “more a log fire and leftover Christmas cake kind of guy”.

Støre’s love of an annual icy dip is shared by Vladimir Putin in neighbouring Russia, with the Russian leader for several years following the Russian Orthodox tradition of plunging your body into icy water to mark the festival of the Epiphany, which falls on January 19th.

Alexander Stubb, Finland’s Prime Minister from 2014 to 2015, is also partial to an icy dip, as is Ebba Busch, the leader of the Christian Democrat party in neighbouring Sweden.

In December, Støre said that he would celebrate Christmas and New Year with his wife Marit Slagsvold at his country cabin.

“Tonight there will be a quiet celebration with those closest to me,” he told VG on Friday. “Tomorrow is the start of a New Year, and I look forward to getting started with everything we will achieve in 2022.”