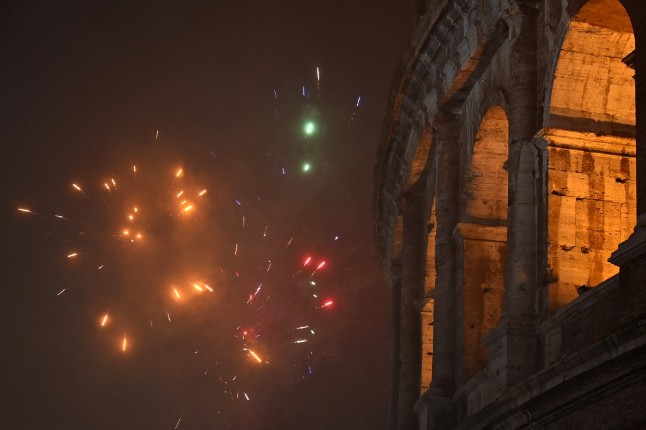 Fireworks can be seen besides the Colosseum in Rome. Photo: Alberto Pizzoli/AFP

As the year drew to a close, the emergence of the Omicron variant pushed the number of daily new Covid-19 cases past one million worldwide for the first time, with Covid infection rates in Europe soaring at a pace not witnessed since the start of the pandemic.

France on Friday became the latest country to announce Omicron was now its dominant coronavirus strain.

As a result, planned celebrations were cancelled or curtailed in Berlin, Paris, Madrid, Stockholm, Copenhagen, Oslo, Vienna, Geneva, and Oslo.

In Spain, about 7,000 people in Madrid’s Puerta del Sol — half the usual capacity due to Covid restrictions — rang in the new year by eating grapes, one for each time the clock chimed up to 12.

In France, police officers patrolled Paris’ Champs-Elysées avenue, which had been lit up with glittering red lights and festooned with “2022” balloons, looking for people without masks.

Most people were simply asked to wear one, but some who argued were fined.

“It is constraining to put on the mask… but it’s no problem” to follow the rule, said Antoine Pham, smiling. The 38-year-old and his partner came from Belgium to Paris for the evening.

Despite the police presence, as the festivities went on, many discarded their masks.

The authorities illuminated the Eiffel Tower, with the monument’s official account posting a video of the display on Twitter.

In Berlin, the traditional New Year’s Eve party at the Brandenburg Gate was cancelled after the government agreed to tighten Covid restrictions just before Christmas. From December 28th, the city’s famed nightclubs also had to shut, putting an end to their New Year’s Eve’s events for the second year running. But the landmark Brandenburg Gate was still illuminated for the “Welcome 2022” TV show on New Year’s Eve.

Germany has also banned fireworks, as it did last year, mainly to prevent hospitals having to treat injuries resulting from pyrotechnic accidents as well as Covid-19 patients.

This did not prevent at least one accident, with a 37-year-old man killed and a 39-year-old man seriously injured in the Hüchel district of Hennef. Police believe the fireworks may have been home-made.

Although the party was cancelled, the Berlin authorities nonetheless put on the traditional municipal fireworks display at the Brandenburg Gate, even though people were not allowed to congregate in front of it.

Crowds gathered, nonetheless, on the nearby Unter den Linden boulevard as people hoped to catch a glimpse of the display.

In Vienna, celebrations were cancelled completely.

In Stockholm, the city authorities also cancelled their official celebration, although the Skansen outdoor museum held its traditional New Year’s concert without a live audience, broadcasting the event on Swedish television.

Plenty of people put on their own amateur fireworks displays, however, with small crowds gathering at Skeppsbron in Gamla Stan to enjoy the displays.

Italy’s government last week unanimously approved stricter rules on public gatherings, among measures included in a new decree which came into effect as of December 25th.

Outdoor public events and parties have been temporarily banned during the festive season, from December 25th-December 31st, after many local authorities had already chosen to cancel Christmas and New Year’s Eve events in towns and cities across the country.

This did not stop people in Rome and elsewhere coming out onto the streets and holding their own informal displays. In Rome, many gathered around the Colosseum. In Denmark, while there were fewer restrictions than in 2020, the traditional wild celebrations were still heavily curtailed, with the authorities calling on people to “avoid big celebrations”.

Here you can see fireworks being let off behind the Amalienborg Palace in Copenhagen, ahead of the Queen’s New Year’s Speech.

And in Geneva, people were able to enjoy Swiss artist Dan Acher’s Borealis sound and light show with Covid-19 restrictions in place.

The Swiss government did not update its Covid-19 measures on Friday despite rising infection rates, so clubs and restaurants were open on the night, with restrictions in place.