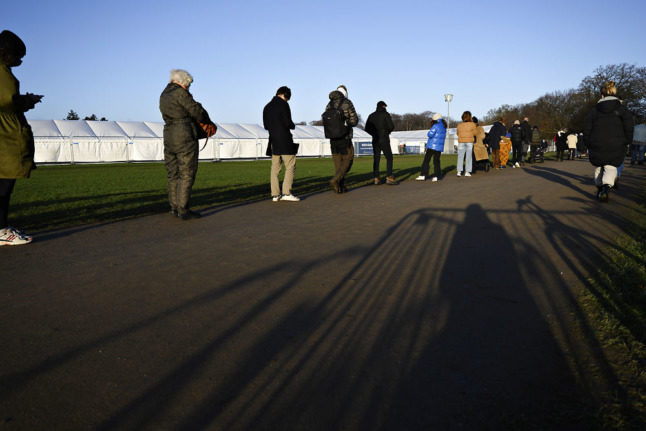 High Covid-19 infection rates are casting a shadow over the end of 2021 in Denmark. People queue for testing in Copenhagen on December 16th. Photo: Philip Davali/Ritzau Scanpix

Thursday’s figure is the second-highest recorded during the pandemic in Denmark behind the 23,228 recorded 24 hours earlier.

The 21,403 positive results came from 205,153 PCR tests, giving a positivity rate of 10.43 percent. The rate is considerably higher than earlier in the pandemic but roughly in line with and slightly lower than data from the first three days of this week, when it has been between 12 and 13 percent.

High demand means that authorities are currently giving priority for PCR tests to people with symptoms of the virus or who are close contacts to confirmed cases.

A total of 665 people are now in hospital with the coronavirus, 10 fewer than on Wednesday. 178 were admitted during the last day but admissions were outweighed by discharges.

High discharge numbers are an encouraging sign that patients in hospital with Covid-19 are admitted for shorter periods than in earlier phases of the pandemic, an analyst suggested.

“In the same period last year we had around 4,500 infections per day, which resulted in 900 admitted patients [at the peak, ed.],” Eskild Petersen, professor of infectious diseases at Aarhus University, told news wire Ritzau.

“If you compare today’s admission numbers to the same period last year, it’s clear that we no longer get so ill from the corona virus. That is naturally also thanks to the vaccines,” Petersen said.

The professor also noted that some data suggest the Omicron variant, now dominant in Denmark, does not cause as severe disease as earlier variants.

Around 80 percent of positive tests in Denmark are currently caused by the variant.

A first stock of Paxlovid, a tablet which can be described by doctors to combat Covid-19 symptoms, has been delivered to Denmark, health authorities confirmed in a statement.

“The first delivery has arrived today and the rest will be delivered continuously during the coming period,” the Danish Health Authority said.

Denmark has purchased 40,000 treatment courses of the medicine.

Doctors decide when to prescribe the medicine, which is suitable for adults infected with Covid-19 who are at risk of serious illness with Covid-19. It is taken over a course of five days when symptoms are still mild.

“Treatment with Paxlovid is for the patients who are at greatest risk of serious illness with Covid-19 and the treatment will be an important part of the future management of Covid-19,” the Health Authority said in the statement.

The arrival of a medicine for Covid-19 does not signal the end of vaccination which remains “the most effective measure to prevent serious illness and death,” it said.

Denmark has purchased the Paxlovid supply through a deal with pharmaceutical company Pfizer.

The infectious disease control agency State Serum Institute (SSI) has 2.2 million Covid-19 vaccines which have been in storage for so long that they are no longer usable, news wire Ritzau earlier reported.

The vaccines were purchased when Denmark was acquiring as many as possible during the pandemic but because they are not effective against newer variants of the coronavirus, they can no longer be used.

Another 3.6 million doses in storage at SSI can only be used for the initial two doses for as-yet unvaccinated people – who are now limited in number given Denmark’s high vaccine uptake. This means they are unusable in the current booster programme.

The cost of the 5.8 million vaccines is estimated at between 116 and 783 million kroner.