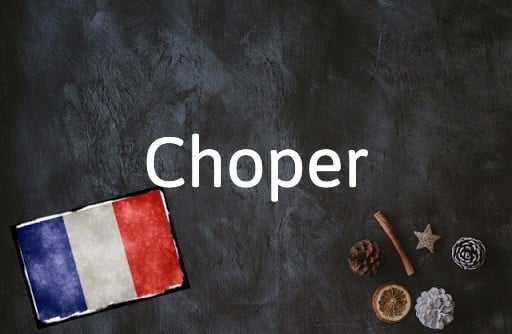 Why do I need to know choper?

Because there’s a pandemic, but even when (if?) it’s over, illness will always be with us.

Choper, pronounced “shop-eh”, is a slang verb that means “to catch”, typically in relation to an illness. It’s informal so you won’t hear it in government health briefings, but it’s not offensive.

It is thought to come from the Old French, chopper, which meant “to stumble/to fall”.

On m’a chopé mon vélo – They stole my bike

While choper can be used in multiple contexts, the verb conveys a general sense of “taking”: your health; your possession; your freedom; or perhaps in the last example, your phone number.

The verlan of choper is pécho. When used in the verlan form, this word is generally only applied in the romantic sense.

As previously mentioned, this verb is mostly used to talk about getting ill.

Être covidé – To have Covid

Être infecté – To be infected

Être contaminé – To be contaminated

Être empoisonner – To be poisoned

Être intoxiqué – To be poisoned

Why do I need to know s’autokiffer?

Because French is the language of love, so you should know how to extend that to yourself too.

The phrase, a colloquial way to reference self-love, combines the prefix auto (self) with the verb Kiffer, which originally comes from Arabic and is used in French slang to mean “like,” “love” or “very into.” When put together, it becomes the perfect way to say “self-love” in French, but sometimes it can be a bit derogatory if you are referring to someone else in this way.

The French like to put auto in front of words. Some others you might hear are autodérision (to make fun of yourself) and autocongratuler (to congratulate yourself/ pat yourself on the back) or, during the pandemic, autotest for a home test kit for Covid.

The phrase can be used as a verb (ex. je m’autokiffe), or as an adjective (ex. Il est autokiffe) to describe someone who really loves themself – maybe a bit too much.

This is not something you’ll hear in a formal setting, and you might see some creative ways of conjugating it, as it is primarily a slang phrase. But, if the self-love trend has made its way to France, it is safe to say this word might be around for a while.

Toutes les photos sur son portable sont de lui-même, il est un peu un autokiffe. – All of his pictures on his phone are of himself, he’s a bit full of himself.

Bien dans sa peau – literally translating as ‘good in one’s skin’ this means a person who is comfortable with themselves and accepts themselves as they are.

Avoir le melon – meaning ‘to have the melon’ this means someone who is big-headed, full of themselves or arrogant