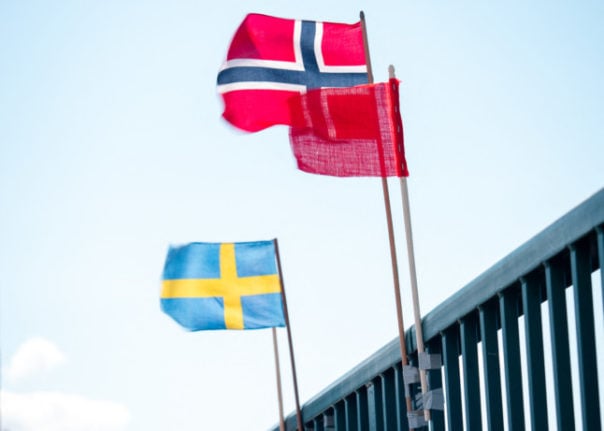 A file photo of Swedish and Norwegian flags at the old Svinesund Bridge. Many travellers from Norway must present a negative Covid-19 test to enter Sweden as of December 28th, 2021. .Photo: Petter BERNTSEN / AFP

As of December 28th, many foreign travellers need to show a negative Covid test to be allowed to enter Sweden, regardless of whether or not they are fully vaccinated and regardless of which country they’re travelling from – non-EU, EU or any of the Nordic countries.

The test must have been carried out 48 hours before arriving in Sweden and the original test result document must be written in Swedish, Danish, Norwegian, English or French.

Swedish citizens and foreign residents who can prove they live in Sweden are still among the categories of travellers who are exempt from showing a negative test.

People travelling from the EU, including Nordic countries Denmark, Norway, Finland and Iceland, also need to show a negative test, regardless of vaccination status.

People who frequently commute across the Swedish border for work or studies can choose to either show a negative test no older than a week, or a valid vaccine pass.

A separate recommendation to get tested after arriving in Sweden still applies, regardless of whether or not a test result was shown on the border. Border commuters are exempt from the recommendation to get tested every time after arriving in Sweden. Instead, they should get tested once a week if they used the vaccine pass to enter. If they instead show a negative test to enter every week, they don’t have to take additional tests.

Sweden’s Public Health Agency has issued guidance on what kind of test will be accepted.

READ ALSO: ‘Harryhandel’: Is the return of cross-border shopping in Norway really a good thing?

The test can be either an antigen test or a PCR test and must have been carried out 48 hours before arriving in Sweden – not 48 hours after you get the result, and not 48 hours after departure, so make sure you plan your trip carefully, especially if it’s long-distance.

The test certificate must also include the following information, and be written in Swedish, Danish, Norwegian, English or French:

READ ALSO: Everything you need to know about travelling to, from and within Sweden

The requirement to show a negative test applies to those over the age of 12 and regardless of where in the world you are travelling from, and whether or not you are vaccinated. If you belong to a category of traveller which has to present a negative test and you don’t do so, or if your flight is delayed so that you arrive in Sweden later than 48 hours after it was carried out, border police may refuse entry.

However, previous exemptions from showing a Covid test generally still apply. That means, among other things, that Swedish citizens and foreign residents who can prove they live in Sweden have the right to enter without showing a negative test.