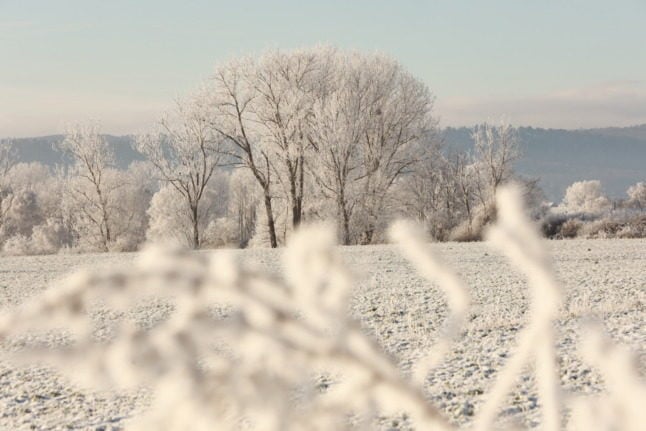 A blanket of snow covers the hills in the Harz region of Saxony-Anhalt. Photo: picture alliance/dpa/dpa-Zentralbild | Matthias Bein

A week or so before the festive break, meteorologists were trying to manage expectations for a white Christmas. Computer modelling showed that for those in the western parts of Germany and the lowlands, slush and drizzle would be far more likely to crown the celebrations than snow.

READ ALSO: Can Germany look forward to a white Christmas in 2021?

In many of the higher altitude regions of Germany, however, icy winds blowing in from Siberia brought with them a covering of festive frost on Christmas and Boxing Day – even in the western states.

Here are some of the best pictures snapped by photographers over the Christmas weekend.

A skier surveys the landscape from atop the Fichtelberg in Saxony. On Boxing Day, hundreds of day-trippers flocked to the Ore Mountains for winter sports. However, due to the Corona Protection Ordinance, the ski lifts and other winter sports facilities are currently closed. The cordoned-off ski lifts didn’t stop groups of walkers and families with sleds enjoying the toboggan slope at Fichtelberg. Escaping the log fire, holidaymaker Martin Falke and his dog Miami went for a walk in the snow near Rottach-Egern, Bavaria, in heavy fog on Boxing Day. Hoarfrost formed on bushes and trees in Saxony-Anhalt over the weekend as temperatures of around minus 10 degrees made fine water droplets freeze into ice, transforming the Harz Mountains into a winter wonderland. Children’s fairground rides, historic buildings and fir trees were capped with snow in a delightfully festive scene at Wernigerode market in Saxony-Anhalt. In double-digit minus temperatures, employees of the Freyburg winegrowers’ association harvested frozen grapes in Müncheroda, Saxony-Anhalt, on December 26th. With the days still short, harvesting begins in the dark.

Four rows of Riesling grapes were harvested on Boxing Day, and the naturally frozen grapes were pressed in the early winter morning. The northern state of Schleswig-Holstein, near the Danish border, was treated to a dusting of festive frost over the Christmas weekend. On Boxing Day morning, a partially frozen Lake Idstedt glistened in sub-zero temperatures. In Torfhaus, Lower Saxony, a snowman stood ready to greet guests for Boxing Day festivities after the northwestern state enjoyed a covering of snow. Mountainous Bavaria also saw snow over the weekend – along with a thick covering of fog. Here, a hiker walks through the snow in heavy fog on the Wallberg near Rottach-Egern. In Baden-Württemberg, one hardy wild swimmer went for a dip in the Schwarzachtalsee shortly after daybreak on Boxing Day.

Though the winter wonderland may be a dream for winter sports enthusiasts, road users should be prepared for icy roads and pavements at the start of the week – especially in central Germany.

Parts of the federal states of North Rhine-Westphalia, Hesse, Bavaria, Thuringia, Saxony, Lower Saxony, Rhineland-Palatinate and Saxony-Anhalt will be affected on Monday morning, according to the German Weather Service (DWD).

Obstructions in road and rail traffic were possible. “The black ice situation will continue into the morning and then weaken,” DWD expert Florian Bilgeri predicted.