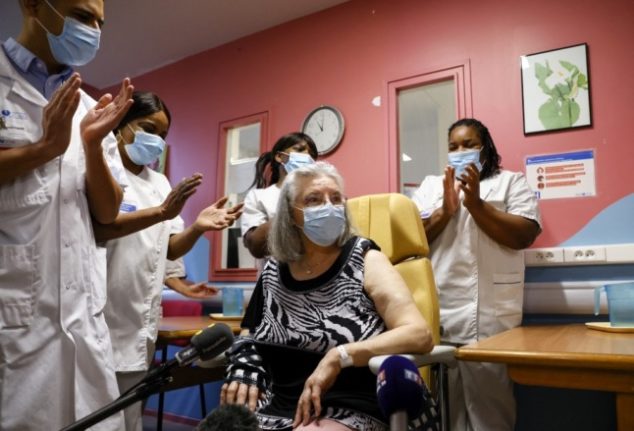 On December 27th 2020, Mauricette received her Covid vaccination in the greater Paris area and told the assembled reporters Je suis très émue (I am very moved).

One year on, here’s how the French vaccination programme is looking.

Of the total French population are fully vaccinated. Overall 52.7 million have received at least one dose, while 51.6 million are counted as ‘fully vaccinated’.

Until December 22nd, only those aged 12 and over were eligible to be vaccinated, so looking at the eligible population the percentage vaccinated rises to 89 percent fully vaccinated and 91 percent who have received at least one dose.

However there are still 6 million French people who have not been vaccinated.

The 70 to 79 age group is the most vaccinated in France, with 98 percent fully vaccinated. However the over-80s age group has a significantly lower vaccination take-up, an unusual pattern not replicated in most European countries.

This is of concern to the authorities, as over 80s are likely to be vulnerable to developing the most serious forms of the virus that can result in hospitalisation and death. Percentage of the population who have received at least one dose of the vaccine, be region. Map: Covidtracker.fr

While overall vaccine coverage is high, the figures hides wide regional disparities. France’s overseas territories of Martinique and Guadeloupe have only 38 and 39 percent respectively of the population vaccinated, while attempts to introduce the health pass and vaccine mandates for healthcare workers lead to several weeks of violent protests.

Within mainland France, the island of Corsica has the lowest vaccination coverage with just 66.1 percent of the total population having received at least one dose.

Overall the west of France has higher rates than the east, with Brittany the most vaccinated region with 82.5 percent of the population vaccinated, compared to 73.3 percent in the southern Provence-Alpes-Côte d’Azur region.

The booster shot campaign was launched in France in September, initially reserved for high-risk groups before being expanded by age and then opened up to all adults in November.

Since the beginning of the booster shot campaign the recommended gap between second dose and booster has shortened several times, it is now recommended that people get their booster four months after becoming fully vaccinated (after the second dose for most people).

As of December 26th, 22,002,825 booster doses have been administered in France, according to the Health Ministry.

France has been heavily reliant on Pfizer for its vaccine programme and in total 79 percent of all vaccines administered in France have been Pfizer.

In total four vaccine types are licensed for use in France; Pfizer, Moderna, AstraZeneca and Johnson & Johnson (Janssen).

However only Pfizer is recommended for all uses by French health authorities, as younger people are not advised to have AstraZeneca after reports of rare but severe side effects including blot clots were reported in several European countries. AstraZeneca is still used for older age groups, but there have been issues of supply from AstraZeneca to the EU vaccine procurement programme, which France uses.

Only Pfizer and Moderna are used in the booster shot programme, with Moderna not recommended for under 30s, because of very rare cardiac side effects.

Pfizer is also the only vaccine to have received approval from the European Medicines Agency for use in the 5-11 age group, who have been eligible for a vaccine in France since December 22nd, although Moderna has also submitted an application to the EMA for approval for use on under 12s.

International comparisons should be taken with a pinch of salt, as much depends on having accurate population figures and up-to-date data on the vaccine programme.

However when looking at comparisons for the share of the population that is fully vaccinated or has received at least one dose, France is generally towards the top of league tables with a good level of vaccine coverage.

Opening up vaccinations early to over 12s and more recently to over 5s has also helped France to increase its percentage of the total population vaccinated.

People who’ve had J&J, sometimes known as Janssen, used to have full vaccination status after a single dose of the vaccine.

Since January 15th, however, a single dose of J&J should no longer count as full vaccination, according to the Paul Ehrlich Institute (PEI), the country’s vaccine authority.

In autumn last year the German government began recommending a second mRNA jab for people who’d had J&J – which many people thought was the booster vaccination.

However, according to the PEI’s update on proof of vaccination within the Covid Protective Measures Exemption Ordinance and the Coronavirus Entry Ordinance, the second shot is needed to complete ‘basic immunisation’.

It is unclear at this stage if it means that people returning or coming to Germany from abroad with only one shot of J&J will be counted as partially vaccinated and therefore need to present tests or face other forms of barriers to entry.

We are also looking into what this means for the various health pass rules in states, such as the 3G rules for transport.

The Deutsches Ärzteblatt, a German-language medical magazine, said: “Special rules according to which one dose was recognised as a complete vaccination with the Johnson & Johnson vaccine are no longer applicable.”

The Local has contacted the German Health Ministry for clarification on what this means for those affected.

According to the latest government figures, 5.3 million doses of Johnson & Johnson have been given out in Germany so far in the vaccination campaign.

The news will come as a shock to those who don’t know that they need another jab, or haven’t got round to getting their second vaccine yet.

All other jabs – such as BioNTech/Pfizer, Moderna and AstraZeneca – already require two jabs.

People in Germany are seen as fully vaccinated two weeks after their second dose.

As The Local Germany has been reporting, the German government said in December that people who’ve had J&J need a third shot three months after their second dose to be considered boosted.

“Therefore, after completion of the basic immunisation as recommended by STIKO, i.e. after administration of two vaccine doses (preferably 1x J&J + 1x mRNA), following the current recommendation of the STIKO, a further booster vaccination can subsequently be administered with a minimum interval of a further three months, as with the other approved Covid-19 vaccines,” the Health Ministry spokesman said.

However, there has been much confusion on this front because some states have been accepting J&J and another shot as being boosted, while others haven’t.

It is unclear if the new regulation will mean that states will all have to only accept J&J and two shots as being boosted.

North Rhine-Westphalia, for instance, updated its regulations on January 16th and now requires that people who’ve had J&J and one shot have another jab to be boosted.

Having a booster shot in Germany means that you do not have to take a Covid-19 test if you’re entering a venue, such as a restaurant or cafe, under the 2G-plus rules.

The Paul Ehrlich Institute said that proof of complete vaccination protection against Covid takes into account “the current state of medical science”.