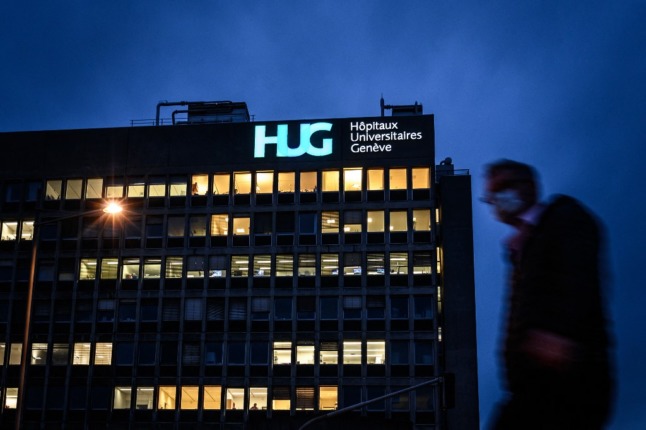 Even as Omicron cases rise, hospital admissions, like here, at Geneva’s University Hospitals, are expected to decrease. Photo: Fabrice Coffrini/AFP

With Omicron on its way to becoming a dominant variant in Switzerland, “a number of cases exceeding 20,000 per day by the second week of January is a plausible scenario”, according to the latest analysis of the country’s epidemiological evolution by the Covid-19 Task Force.

That would be a significant increase from the current (already high) rate of just over 11,000 new infections a day that was reported by the Federal Office of Public Health (FOPH) just before Christmas, on December 23th.

The reason for the spike, health officials say, is that Omicron has been spreading faster and contaminating more people than the current dominant mutation, Delta.

The Task Force’s prediction is based on the increased transmissibility of the new variant, as observed in South Africa, the United Kingdom and Denmark. In these countries, the number of Omicron cases has doubled in the space of a few days.

In Switzerland, Omicron could spread a little more slowly, as the population is almost exclusively vaccinated with mRNA vaccines Moderna and Pfizer, considered to be particularly effective. However, the country will not be able to escape altogether “an explosion of cases” of this new variant.

It is expected to exceed 50 percent of infections between Christmas and January 6th. In the second week of January, the number of cases could top 20,000 per day, according to the Task Force.

In the most extreme case, more than 25,000 infections per day would be recorded in Switzerland as of January 2nd. If the actual spread is slower than feared, the number of cases would remain below 10,000 per day until mid-January.

This image also shows how the Task Force expects Omicron to evolve in Switzerland: The main scenario of more than 20,000 cases per day in the second week of January, considered as the most probable by the Task Force, is not, however, written in stone as many uncertainties still remain.

They are born out of questions related to the degree of protection a booster vaccine offers against Omicron. There is some evidence that a third dose of a mRNA vaccine, especially if administered as early as four months after the second shot, offers at least some resistance against the variant, though to a lesser degree than against Delta.

FOPH indicated that early data on Omicron shows it is better than previous coronavirus strains at dodging vaccine protections, but that a booster shot could “greatly improve protection”.

So what’s the (relatively) positive news in all this?

As we do not yet have enough hindsight with Omicron in Switzerland, it is necessary to watch how the situation has developed in other countries.

A study from Imperial College London suggests that the risk of being hospitalised for more than one day due to this variant is reduced by 40 to 45 percent versus Delta-related hospitalisations. A Scottish study draws similar conclusions: the Omicron variant results in less frequent hospital stays.

And based on a preliminary analysis carried out in South Africa, where the variant was first discovered, hospitalisation rate for Omicron is 29 percent lower than in Delta and previous waves.

READ MORE: What is the Covid-19 situation in Swiss hospitals right now?

Also, some specialists say the spread of Omicron and high numbers of people getting infected with it helps boost resistance against this strain.

“I assume that we will have survived the brunt of the pandemic in spring 2022 because the basic immunity will be high enough,” said Rudolf Hauri, member of the Conference of Cantonal Directors of Health.

Until now only the Pfizer vaccine has been approved in Switzerland for this group, starting at age five.

However, on Friday the country’s drug regulatory body, Swissmedic, gave the green light to start administering Moderna’s vaccine to children over six, who will receive two half doses of 50 micrograms at an interval of four weeks.

Those over 12 and adults are injected the full dose.

The agency said that based on clinical studies, young kids react to the Moderna vaccine much like older children and adults do.

“The most commonly reported side effects such as pain, redness or swelling at the injection site, fatigue, headache, shivering or nausea, were similar to those in adolescents and young adults”. Swissmedic said.

READ MORE: Everything you need to know about Covid vaccines for children in Switzerland

Also, “fever occurred more frequently in children, whereas muscle and joint pains were seen less often than in adolescents or adults. The undesirable effects were generally mild to moderate and lasted for a few days”.

While some parents may be reluctant to vaccinate their children against the coronavirus, health officials say the vaccines are safe. They also argue that in order to achieve herd immunity, all age groups should have their shots.

While the number of Covid infections has dropped significantly in Switzerland in the past two months, epidemiologists are predicting a new outbreak in the fall and winter, when cooler weather drives more people indoors, where the yet-unknown variants will be more transmissible.

READ MORE: How can I get my children vaccinated against Covid in Switzerland?