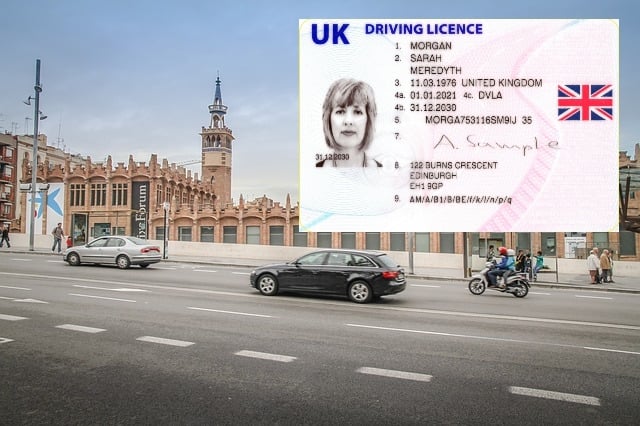 This is the third extension UK authorities request from the Spanish government for the validity of UK driving licences in Spain. Photo: Michal Jarmoluk/Pixabay. Insert: gov.uk

UK Ambassador in Spain Hugh Elliott on Tuesday took to the Embassy’s Facebook Page ‘Brits in Spain’ to offer the latest update for UK licence holders.

“I know you’ve been really concerned about whether you will continue to be able to drive using your UK driving licence in Spain beyond the end of this year,” Elliott said in the video message.

“As I have said in the past, the UK government that includes our team here at the embassy, have been working really hard to reach an agreement with Spain so that you, residents here, can exchange your UK driving licences without taking a test.”

A deal between Spanish and British authorities could also potentially enable anyone who didn’t register their intent to exchange their UK licence for a Spanish one before December 30th 2020 to carry out the exchange anyway.

It is unclear yet if any future agreement would be beneficial just to British residents who are protected under the Withdrawal Agreement or other UK licence holders who have moved or will move to Spain to become residents since Brexit came into force on January 1st 2021.

“Now, those negotiations are progressing but they haven’t yet reached a conclusion,” the British ambassador in Madrid stressed.

“So what we’ve done is to ask the Spanish government for an extension to the current December 31st 2021 deadline.

“That’s in order for you to be able to continue to drive on your UK driving licence here in Spain in the new year.

If granted, this will be the third extension Spain gives British licence holders since Brexit meant their UK-issued documents became unrecognised by the common EU framework, the first extension being announced in June 2021 and the second one in October.

“I’m expecting them to grant this extension before the end of the year,” Elliott said confidently.

A third extension would give UK licence holders who reside in Spain and registered their intent to exchange more time to do so at Spain’s often-overburdened DGT traffic authority; and for those who didn’t register their intent, more time to drive legally in Spain and potentially sit their Spanish driving test as a safeguard.

“This is a message for British citizens resident in Spain and for other residents driving with a UK driving licence, and I know that does include some Spaniards,” Elliott highlighted.

“Many of you have also rightly pointed out that Spaniards resident in the UK are able to exchange their Spanish licence for a UK one without taking a practical test”.

After a long wait for answers, UK licence holders in Spain are now hoping that a reciprocal agreement can finally be reached to solve this Brexit-induced obstacle.

Unless Spain has a bilateral agreement with a third country for the recognition and exchange of licences, most non-EU driving licence holders have six months from their arrival in Spain to use their foreign licences.

After that, they have to sit theory and practical tests and get a Spanish licence from scratch.

This doesn’t apply to British tourists with UK licences visiting Spain who are for example renting a car during their holidays. The issues affect UK licence holders who are residents in Spain.

Filling up a tank of petrol or diesel in Spain costs between €16 and €23 more than a year ago, making it the most expensive August on record – despite the government’s 20 cents per litre discount on fuel.

Filling an average 55 litre tank with either petrol or diesel now costs around €93, which is equivalent to €16 more than a year ago for petrol, and €23 more for diesel.

Despite these record breaking prices, fuel prices in Spain have actually been falling in recent weeks, reaching their lowest values since May.

As of Thursday 4th August, petrol in Spain is sold on average at €1.702 per litre, and diesel €1.693, including the government discount.

Without the discount, the price of petrol is €1.902 per litre and diesel €1,893 on average, according to figures from the European Union Oil Bulletin.

The government’s reduction on fuel costs, introduced as part of an ongoing raft of measures to help Spaniards amidst the cost of living crisis, means consumers save around €11 every time they fill up the tank.

The 20 cent reduction on the litre was introduced in March of this year, when fuel prices jumped and crossed the €2 per litre threshold.

Fortunately for Spaniards, the combination of falling prices and the government taking 20 cents off the litre mean that Spanish fuel prices are below the European average, where petrol costs €1.856 and diesel €1.878 across the member states.