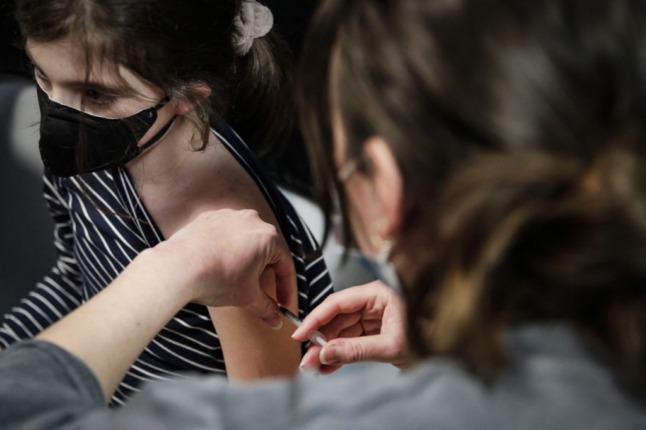 Vaccination of the younger age group is due to start in France next week. GEOFFROY VAN DER HASSELT / AFP

“If all goes well, we will start vaccination of children on the afternoon of December 22nd in specially adapted centres,” he told France Inter radio.

Europe is currently battling to rein in the spread of the highly mutated Omicron variant of the coronavirus, believed to be much more infectious. On Friday, French Prime Minster Jean Castex said that France must be ready for a “lightning fast” spread of the Omicron variant seen, adding that it could become dominant in early 2022.

Denmark, which has seen a surge in cases attributed to the new Omicron variant, and some Austrian regions, already began offering jabs to younger children in November.

The spread of the Omicron variant was also the main reason behind plans to introduce a new, stricter health pass, Veran said, as new restrictions making travel between France and the UK came into force.

Around seven to 10 percent of new Covid cases in France are thought to be of the Omicron variant, Veran said.

“It’s simple, it’s obvious, it’s clear, we want French people to get vaccinated,” he said on the radio, explaining in a tweet that this was to “avoid placing further demands on the 91 percent of people who had already received at least one dose”.

“[Omicron] is a virus which is much, much, much more contagious than the Delta variant. It’s multiplying so quickly,” he said.

The Prime Minister said on Friday that the government planned to transform the current health pass into a vaccine pass. This would mean that people would need to show proof of vaccination – not just negative Covid tests and proof of recent recovery – to enter many public venues.

However, this proposition would have to be approved by the French parliament and would be debated by MPs in January.

Nearly 3,000 people are in intensive care with Covid-19 in France, according to latest figures.

Previously offered only to over 80s and those with a medical condition, the programme will now be extended to those aged 60 and over, health minister Olivier Véran announced on Thursday, reaching an extra 500,000 people.

He told RTL: “We are opening the second booster to people aged 60 and over, six months after their first booster.”

The change comes into effect immediately, although the second booster shot can only be given once six months has passed since the first booster.

As ever, there is no need to wait for an invitation, if you fit the criteria you can book your appointment directly with a pharmacy, GP or vaccine centre.

A second booster is entirely voluntary, and will not be required to keep ‘fully vaccinated’ status for those in the eligible groups.

Those who qualify for the second booster shot are now

EXPLAINED Who qualifies for a second Covid vaccine booster shot?

The Haute Autorité de Santé, France’s medical regulator, considers that extending second boosters to the entire population is not “relevant” at this stage.