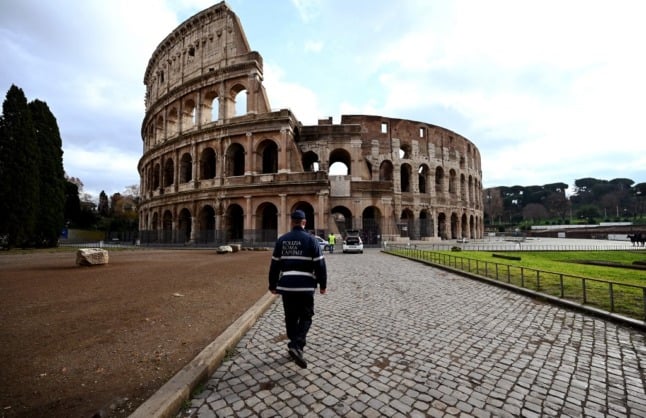 Italy has been named country of the year for 2021. Photo by Vincenzo PINTO / AFP

2021 has been nothing short of momentous for Italy – from winning the European cup to triumphing in the Eurovision song contest and claiming gold in the Olympics, the country has repeatedly stood out for its global achievements this year.

However, these aren’t the reasons Italy has been named ‘country of the year’ by global news magazine The Economist.

Instead, it’s taken first place for its politics.

“The Economist has often criticised Italy for picking leaders, such as Silvio Berlusconi, who could usefully have followed the Eurovision-winning song’s admonition to ‘shut up and behave‘,” writes the publication.

“Because of weak governance, Italians were poorer in 2019 than they had been in 2000. Yet this year, Italy changed,” it added.

It attributes Italy’s newfound economical success to the country’s leader since February 2021, Mario Draghi, who it described as “a competent, internationally respected prime minister”.

One distinguishing feature of Draghi’s success is said to be the national recovery and resilience plan, backed by EU funds.

“For once, a broad majority of its politicians buried their differences to back a programme of thoroughgoing reform that should mean Italy gets the funds to which it is entitled under the EU’s post-pandemic recovery plan,” reads the report.

Draghi unveiled the 222.1-billion-euro ($268.3-billion) programme back in April, pledging to address both the damage inflicted by Covid-19 and Italy’s long-standing structural issues.

The investment is part of the EU’s 750-billion-euro post-pandemic recovery fund – a figure that has now grown to €806.9 billion – intended for the whole bloc, with Italy set to be the biggest recipient.

Another pillar of Italy’s acclaimed success in the ranking is its vaccination rollout, cited as one of the highest in Europe.

In another difficult year of the pandemic, countries in all corners of the globe have been put to the test with new variants, such as Omicron, and varying vaccine rollouts.

Some 85.2 percent of Italy’s eligible population over 12 years old have now been fully vaccinated, while over 13.6 million booster shots have already been administered, according to the latest official data.

In the graph below, Italy’s ranking doesn’t reflect the government’s figures as it has used different parameters to determine a full vaccination cycle.

However, it still ranks highly in Europe.

The report also stated that Italy’s economy is recovering after “a difficult 2020” and in fact, “more speedily than those of France or Germany”.

This is despite Italy’s public debt passing 155 percent of its GDP last year, with Brussels warning that it is still budgeting to spend too much next year.

However, Italy’s GDP rate grew by 2.6 percent in the third quarter of 2021 and ratings agency Standard & Poor has revised its outlook for Italian debt from stable to positive.

The Economist’s designation was welcomed by the Italian Embassy in the UK, who said they were “proud and delighted”  and would “toast to that with some Prosecco”.

Despite the positive developments, however, the report gave a word of caution about the new prime minister’s success: “There is a danger that this unaccustomed burst of sensible governance could be reversed. Mr Draghi wants to be president, a more ceremonial job, and may be succeeded by a less competent prime minister.”

Still for now, The Economist wrote, “It is hard to deny that the Italy of today is a better place than it was in December 2020.”

In fact, the annual accolade doesn’t go “to the biggest, the richest or the happiest,” but to the country that has made the biggest strides that year.

“Past winners have included Uzbekistan (for abolishing slavery), Colombia (for making peace) and Tunisia (for embracing democracy),” clarified the magazine.

It noted that many countries struggled in the challenging year of 2021.

“In many countries civil liberties and democratic norms were eroded,” reads the report.

They referred to the jailing of Russia’s main opposition leader, Donald Trump’s supporters storming the US political headquarters and the civil wars that took hold in Ethiopia and Myanmar.

“Yet amid the gloom, a few countries shone,” it added. It’s for this reason Italy was named ‘country of the year 2021’.

The decision by the top European economies effectively ends months of effort to implement the tax jointly across all 27 member states.

The 15-percent minimum tax was one of two pillars of a major international agreement decided at the OECD and signed by more than 130 countries, including Hungary and the United States.

“Should unanimity not be reached in the next weeks, our governments are fully determined to follow through on our commitment,” the countries said in a joint statement.

“We stand ready to implement the global minimum effective taxation in 2023 and by any possible legal means,” the countries added.

French Finance Minister Bruno Le Maire, who initiated the joint text, said that “tax justice must be a priority for the European Union”.

“We will put in place minimum taxation from 2023, either through the European route or through the national route,” said Le Maire.

Christian Lindner, his German counterpart, said Germany will “if necessary” adopt the tax “independently of an agreement at the European level”.

The EU’s original ambition was that the 27-member bloc would be the first jurisdiction to implement the OECD-brokered agreement. The bloc-wide plan needed the vote of all EU countries in order to pass.

The resistance by Hungary came as the relationship with its EU partners remained fraught, with Budapest along with Warsaw seen as steering away from the bloc’s democratic values.

The Hungarian veto of the minimum tax is seen by many in Brussels as a means of pressure to obtain the release of seven billion euros ($7.3 billion) in grants planned under the European pandemic recovery plan.

Poland’s acceptance of the minimum tax came after Brussels accepted Warsaw’s recovery plan, which should see it receive 36 billion euros in grants and loans over the next several years.