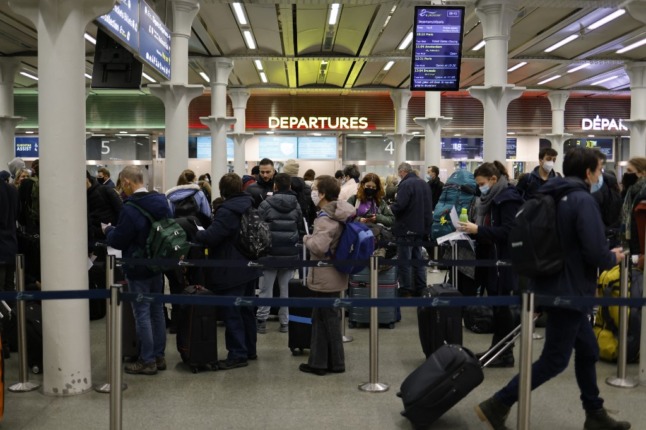 Huge numbers of British and French people are rushing to cross the channel, in both directions, before strict new travel rules come into force. (Photo by Tolga Akmen / AFP)

Passengers are rushing to beat a midnight deadline for travel to and from Britain and France, complaining of an overly draconian reaction and costly last-minute ticket changes before tough new Covid restrictions come into force.

After midnight French time, (2300 GMT Friday) travellers will need to show a compelling reason for travel between the two countries, under shock new rules announced on Thursday by France to combat the Omicron variant of Covid-19.

The only exemptions for needing a compelling reason are for French and European travellers returning to France and British passengers heading in the other direction.

READ MORE Essential motives: Who is allowed to travel between France and UK under new rules?

“I feel very lucky that I managed to get out of France on the last day that it’s possible,” said Isla, a student at the Gare du Nord station in Paris with a ticket for one of the last Eurostar trains heading to London before the rules came into force.

“It is a bit worrying, it’s a bit scary. Who knows what is going to happen in January,” she added.

Travellers expressed relief at being able to travel but surprise at the need for such drastic rules.

All travellers arriving in France from Britain will need to quarantine for seven days, although this can be just two if they provide a negative test after arriving in the country.

‘All a bit panic’

“It’s a bit complicated. We are going to spend the holidays with the family because my brother lives there,” said Jonas Dessertenne, a 34-year-old physiotherapist, saying he had brought forward the tickets by several days to make the deadline.

“We will see for the return afterwards. If after we need quarantine, we will be in quarantine when we return.”

At St Pancras station in London, Elodie Entressangle, 32, said her parents urged her to bring forward her holiday trip to the French city of Lille.

“I was due to leave on Sunday, but I am leaving right now. It’s pretty much a last-minute change. It’s all a bit panicky but I did not fancy spending Christmas alone here.”

As well as the ticket change, she said she had to rebook her PCR test, with France requiring a negative result from all UK travellers.

“I paid £70 to change my ticket. And I changed my test on Saturday to do one this morning, that cost £30 more,” she added.

France on Thursday justified the new rules “faced with the extremely rapid spread of the Omicron variant in the UK” and to give time for its own booster programme to find the upper hand against the variant.

“I think it’s good to keep the masks, social distancing and all that, but yeah, the ban is quite … strong.”

The tight travel restrictions are also being imposed during what analysts see as a breakdown of trust between the British and French governments in the wake of Brexit over a host of issues from migrants to fishing.

French President Emmanuel Macron last week accused UK Prime Minister Boris Johnson of failing to keep his word on Brexit, saying “the problem with the British government is that it does not do what it says”.

The new rules are set to bring havoc to numerous sectors, with this weekend’s European Champions Cup and Challenge Cup rugby matches between clubs from the UK and France postponed, organisers said on Friday.

The UK government has not sought to provoke a row with Paris over the new rules, although Downing Street spokesman did note that Britain had halted hotel quarantine “as this was no longer an effective or proportionate measure to slow the import of Omicron from abroad given it is seeded throughout the world.”

Travel to and from the Channel islands – which are British crown dependancies – has reduced significantly since Brexit, when passports became a requirement for those travelling in and out of the islands and their ports.

Now the president of the local authorities in the Manche département of France has asked that passport requirements be lifted, with hopes of increasing travel to and from the islands.

Jean Morin told Ouest France that there has been a “considerable reduction in the number of passengers on routes between the Channel ports and the islands” and as a result the ferry service between France and the islands was seriously in deficit.

“On these lines, we will never make money, but we cannot be in deficit”, explained the Morin.

He added that if a solution is not found by the deadline of May 1st, 2023, then local authorities will stop funding the shipping company DNO, which runs the Manche Îles Express ferry service.

“If the passport requirement is not lifted by then, we will have no choice but not to renew the service contract for 2024-2025”, Morin told Ouest France.

Only around half of French people have a passport, since the ID card issued to all adults is sufficient to travel within the EU.

READ MORE: Ask the Expert: How Brexit has changed the rules on pensions, investments and bank accounts for Brits in France

DNO re-launched operations in April and since then, the company, and by extension the département – who plays a large role in funding it via a public service delegation – has been losing significant funds.

According to Franceinfo, the number of passengers has been cut in half since passport requirements were introduced. Franceinfo estimates that for one ticket for one passenger costing €30, the département spends €200.

According to Morin, the ideal solution would be to require a simple ID for tourists seeking to take just day-long or weekend-long stays on the islands – which reportedly represents at least 90 percent of the boats’ usual passengers.

“The Jersey government is working hard on the issue and is waiting for an agreement from London and the European Union. There is the possibility that things could move quickly”, Morin told Franceinfo on Tuesday.

Prior to the Covid-19 pandemic and Brexit, boats going to and from the French mainland carried at least 110,000 people per year. In 2022, only 40,000 passengers made the journey, Olivier Normand, the sales manager of Manche Îles Express, told Actu France.

Normand had expected the decline, however. He told Actu France that the company had taken a survey, which found that almost half (between 40 and 50 percent) of their clientele did not have a passport.