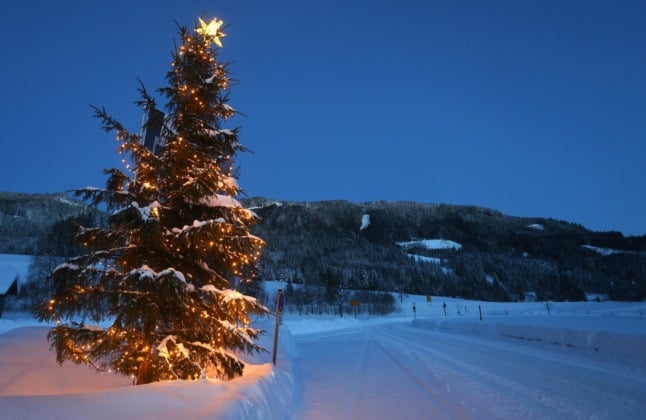 With just a week to go until Christmas Eve, hopes have been growing in Germany to see the country transformed into a dazzling white winter wonderland just in time for the holidays.

Meteorologists have been forecasting the weather with high anticipation, as many earlier models showed cold winds and snowfall sweeping across the country by the 24th.

Unfortunately, under the latest forecasts from Friday, those high hopes have been dashed somewhat.

According to meteorologist Christian Häckl, the current weather situation is making a white Christmas in Germany increasingly less likely.

“The strong high pressure system will probably shift its core too far north for a white Christmas,” he told Wetter.de on Friday. “This opens the door for low pressure areas to rush in from the west and bring us rather mild and wet weather in Germany.”

Unfortunately, this means temperatures could go up to 10C in the lowlands, leaving most German families with a drizzly outlook as opposed to Lapland-esque paradise on Christmas Day.

Nevertheless, there are some regions in which the remains of snow will last until the fourth week of Advent, RTL meteorologist Patrick Panke claims.

“At least in the high areas of the Bavarian Forest, the Alps or the Black Forest, Upper Harz and the Ore Mountains, the remaining snow has a good chance of surviving the current thaw,” he said. Though the chances of a white Christmas have gone down slightly, there’s a good chance that a cold spell could return in the days leading up to Christmas Eve.

Meteorologists believe the mercury could drop next week as areas of low pressure gather in the east. This could bring icy winds from Siberia into the county, raising the odds of waking up to a blanket of snow on Christmas morning.

“We have to reduce the probability of white Christmas a bit everywhere,” Häckl said, referring to his current modelling. “But that doesn’t mean we’re going to call off the white Christmas completely.”

However, people who live in the western regions of Germany probably shouldn’t get their hopes up too much, experts say.

Whether in Freiburg, Nuremberg, Frankfurt or the Eifel Valley, residents of Baden-Württemberg, North Rhine-Westphalia, Hesse and Rhineland-Pfalz are likely to see temperatures around 11C and rain on the 24th and 25th.

Elsewhere, in higher-up regions, hopes are resting on the festive weekend of the 25th and 26th for temperatures to drop once again, bringing a burst of snow to people in hilly or mountainous areas.

According to meteorologist Carlo Pfaff, the probability of snow in the mountains sits between 50 and 90 percent, depending on the altitude of the mountain range.

READ ALSO: Fact check: Did it really use to snow more often in December in Germany?

In the milder low-lying regions, however, there could be a chance of storms.

“I don’t want start forecasting wind peaks just yet, but it could well be that Christmas will also be stormy with the mild temperatures,” said Wetter.de meteorologist Martin Pscherer.

As they say, however, a week is a long time in meteorology – so we’ll keep you updated if we hear a whisper of incoming snow nearer the time.