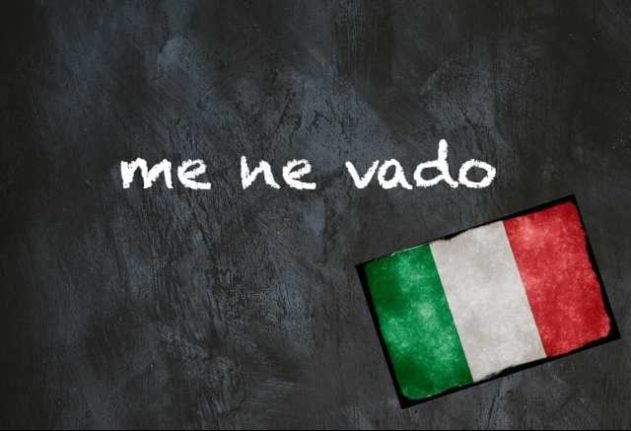 (Io) vado – the first person singular of ‘to go’, andare – is one of the first phrases you’ll learn as a foreigner studying Italian.

But after you’ve been listening to people speak the language for a while, you’ll notice that the alternative formulation me ne vado, from andarsene, also comes up regularly in conversation.

What is the difference between the basic andare and andarsene?

The most simple explanation is that andare is simply to go somewhere, while andarsene is specifically to go away from somewhere.

Stasera vado a vedere uno spettacolo al teatro.
This evening I’m going to see a play at the theatre.

Andarsene is a pronominal verb, which is just a verb with pronouns added on. In this case there are two additions: the reflexive pronouns mi/ti/si/ci/vi, followed by the pronoun ne.

While the reflexive pronoun in andarsene has to change (along with the conjugation of the verb itself) to agree with the sentence subject, the ne always stays the same. You can think of it as standing in for ‘from here/there’ or ‘of here/there’ – so me ne vado can mean ‘I’m getting out of here’ or ‘I’m leaving (from here)’.

Adding pronoun combinations like se ne to an Italian verb often adds a subtle emotional nuance, either positive or negative. So while (io) vado is neutral, me ne vado might have an abrupt or irritated quality (if, say, you’re storming out of the room after an argument) or an upbeat one (if you’re heading off to do something nice). It’s something you can only really infer from context and tone.

Se continuate a parlare così se ne andranno.
If you keep on talking like that they’re going to walk out.

Ce ne andiamo a fare una bella passeggiata?
Shall we head out for a nice walk?

If you want an alternative to andarsene, in most contexts you can use andare via to mean much the same thing.

Vattene!
Get out of here!

The main difference is that you can use andarsene in a sentence to describe either going away from somewhere or leaving to go to somewhere else or to do something else, whereas with andare via you’d generally only reference the place being left.

Me ne sono andata a vedere un film.
I went to go see a film.

If you want to add emphasis, you can use andarsene and andare via in combination.

Appena abbiamo la possibilità, ce ne andremo via da qui.
As soon as we get the chance, we’re busting out of here.

Se ne sono andati via insieme in macchina circa un’ora fa.
They drove off together about an hour ago.

And with that, ce ne andiamo.

Experiencing a delusione (deh-loo-zee-OH-neh) in Italian may not be pleasant, but it doesn’t mean you need escorting to the psychiatrist’s chair.

That’s because while delusione may look and sound like its English cousin ‘delusion’, the word actually means something quite different: disappointment.

The two nouns actually have the same root in the Latin dēlūsiō, meaning a deceiving or deluding, and delūdō, meaning to deceive, dupe, or mock.

But while the English ‘delusion’ has hewn close to the original Latin meaning over the centuries, delusione at some point branched off to its current, quite different, definition.

There’s not much in the way of information about exactly when and how that happened, but it’s clearly a short associative hop from feeling ‘deceived’ or ‘duped’ by things turning out differently to what you’d expected to feeling ‘disappointed’.

The adjective for ‘disappointed’ is deluso for a single masculine subject, changing to delusa/delusi/deluse if the subject being described is feminine singular/masculine plural/feminine plural.

Era delusa da come era venuta la torta.
She was disappointed with how the cake turned out.

Devo dire che siamo davvero delusi dal fatto che siamo stati trattati in questo modo.
I have to say that we’re very disappointed to have been treated this way.

You might correctly recognise rimanere as meaning ‘to remain’, and wonder why we’d use that word here – but rimanere also has an alternative meaning along the lines of ‘to become’, ‘to get’, or simply ‘to be’.

For example, you can rimanere incinta (get pregnant), or rimanere ferito (get hurt or wounded, for example in a car accident).

It’s also very often used with emotions, usually those experienced in the moment rather than long-term ones: you can rimanere sorpreso (be surprised), rimanere triste (be sad), rimanere scioccato (be shocked)… and rimanere deluso (be disappointed).

Sono rimasto molto deluso quando mi ha detto di aver abbandonato la scuola.
I was very disappointed when she told me she had dropped out of school.

Siamo rimasti delusi dalle condizioni della stanza d’albergo al nostro arrivo.
We were disappointed by the condition of the hotel room when we arrived.

With that, we wish you a weekend free of delusioni (disappointments)!