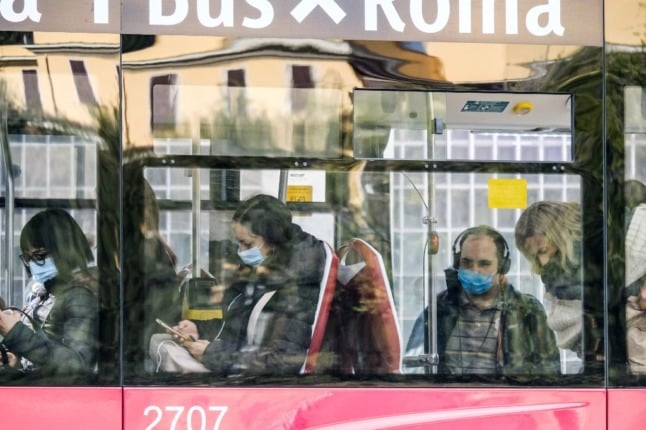 People wearing a protective face mask are seen in a bus amid the Covid-19 pandemic, in Rome. (Photo by Andreas SOLARO / AFP)

Eight hours of strike action are planned for December 16th in cities across Italy in response to the Italian government’s proposed Budget Law for next year.

Unions in Milan, Bari, Cagliari, Palermo and Rome are due to hold demonstrations under the slogan “Together for justice”, according to news agency Ansa.

The CGIL (Italian General Confederation of Labour) and the UIL (Italian Labour Union) called for the move in response to what they called an “unsatisfactory” budget plan.

The unions said they wanted the budget to be reevaluated, particularly when it comes to “taxation, pensions, schools, industrial policies, combating relocations, and combating job insecurity, especially for young people and women, and the non self-sufficient,” read a statement from CGIL.

“All the more so in the light of the resources available at this stage, which would have enabled a more effective redistribution of wealth, to reduce inequalities and to generate balanced and structural development and stable employment,” it added, apparently referring to European Union funding being made available under the Recovery Plan.

Striking workers have scheduled stoppages to public transport, which will vary from city to city.

Where air transport is concerned, the strike is set for one shift from 7am to 10am and from 6pm to 9pm. Enac, the Italian Civil Aviation Authority, has published a list of confirmed flights throughout the strike.

Staff on ships and ferries will also stop working, except for maintaining essential routes and connections with the minor islands.

Some train services will also be disrupted. Employees of FS Italiane Group, Italy’s national rail operator which owns Trenitalia, are planning to strike from midnight to 9pm on December 16th.

Some train services have been guaranteed to continue, however. Trenitalia has published its list of trains that will run, as has Italo.

Not all public services are affected. The public and private health sector and related services, including healthcare facilities, are exempt to safeguard citizens’ right to health in this phase of the pandemic emergency.

Environmental hygiene and postal counter workers will not be on from the strike, which means rubbish should still be collected and post offices will remain open.

While police officers “cannot go on strike”, Silp Cgil-Uil police union head Daniele Tissone told reporters, “malaise is strong in this sector and many who are not on duty on Thursday will join demonstrations” in Rome and elsewhere.

The Budget Law lays out a raft of economic reforms for 2022 as well as some extensions to tax breaks, covering pensions, household bills, income tax, equal pay and further funding for Italy’s various building bonuses.

Prime Minister Mario Draghi has previously claimed that the multi-billion euro plans will help Italy to grow over six percent next year.

This means the mask mandate will still apply to all air passengers travelling to or from Italy, despite the end of an EU-wide requirement to wear masks on flights and at airports across the bloc from Monday.

READ ALSO: Reader question: What type of mask will I need for travel to Italy?

“Wearing face masks at airports and inflight should be aligned with national measures on wearing masks in public transport and transport hubs,” they said in a joint statement published on May 11th.

READ ALSO: Why are so many Italians still wearing face masks in shops?

“If either the departure or destination States require the wearing of face masks on public transport, aircraft operators should require passengers and crew to comply with those requirements inflight, beyond 16 May 2022.

The Spanish government also said on Thursday that air passengers would have to continue wearing face masks on planes.

Italy’s current rules specify that higher-grade FFP2 masks should be worn on all forms of public transport, including buses, trams, regional and high-speed trains, ferries, and planes.

Though rules were eased in some settings from May 1st, masks also remain a requirement until June 15th at Italy’s cinemas and theatres, hospitals and care homes, indoor sporting event and concert venues, schools and universities.