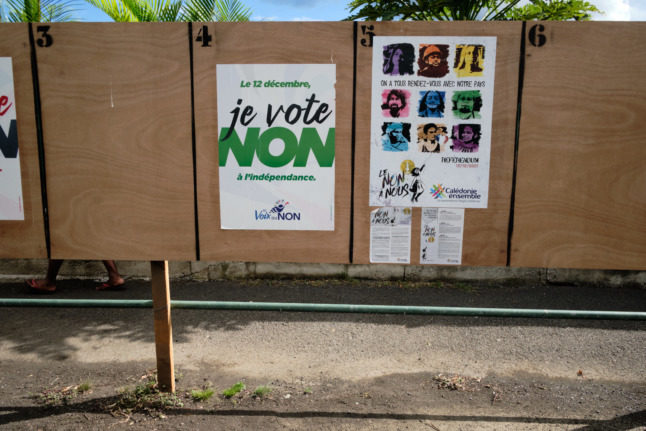 Posters can be seen on electoral boards near a polling station ahead of the referendum on independence from France in Noumea, on the French South Pacific territory of New Caledonia. Theo Rouby / AFP

The territory, some 2,000 kilometres (1,250 miles) east of Australia, was allowed three independence referendums under a 1988 deal aimed at easing tensions on the island group.

Having rejected a breakaway from their French former colonial masters in 2018 and then again last year, the territory’s 185,000 voters will be asked one last time: “Do you want New Caledonia to accede to full sovereignty and become independent?”

The vote comes against the backdrop of increasingly strained ties between Paris and its allies in the region.

France regards itself as a major Indo-Pacific power thanks to overseas territories like New Caledonia.

President Emmanuel Macron has insisted that the French state takes no side in the referendum and only has the job of ensuring it proceeds fairly and smoothly. “The day after (the vote), whatever the result is, there will be a shared life” between New Caledonia and France, he said on Thursday.

Australia infuriated France in September by ditching a submarine contract in favour of a security pact with Britain and the United States.

READ ALSO: France ‘stabbed in back’ by Australia over submarine deal, says minister

Behind the recent spat looms China’s growing role in the region, with experts suspecting that an independent New Caledonia could be more amenable to Beijing’s advances, which are partly motivated by an interest in the territory’s mining industry.

China’s ‘pearl necklace’
“If the French safeguard disappears, all elements would be in place for China to establish itself permanently in New Caledonia,” said Bastien Vandendyck, an international relations analyst specialising in the Pacific.

“All China needs now to complete its pearl necklace on Australia’s doorstep is New Caledonia,” he said.

Pro-independence campaigners are boycotting Sunday’s vote, saying they want it postponed to September because “a fair campaign” is not possible while coronavirus infection numbers are high.

New Caledonia’s 270,000 inhabitants were largely spared Covid infections during the first phase of the global pandemic, but have suffered close to 300 Covid deaths since the appearance of the Delta variant in recent months.

The French government has rejected the demand, saying the virus spread had slowed down, with the infection rate down to a relatively modest 80 to 100 cases per 100,000 people.

The pro-independence movement has still threatened non-recognition of the referendum outcome, and vowed to appeal to the United Nations to get it cancelled.

The French minister in charge of overseas territories, Sebastien Lecornu, said that while it was “a democratic right” to refuse to vote, the boycott would make no difference to the referendum’s “legal validity”.

‘Declaration of war’
The pro-French camp, meanwhile, has called on its supporters to turn out in numbers, fearing that the boycott by the pro-independence parties may prompt them to stay at home since victory may look like a foregone conclusion.

“It is important that the mobilisation of the no-independence supporters remains absolute, to show that they are in a majority and united in their wish for New Caledonia to remain part of the French Republic,” Thierry Santa, president of the conservative Rassemblement-LR party, wrote in a letter to voters.

In June, the various political parties agreed with the French government that Sunday’s referendum, whatever its outcome, should lead to “a period of stability and convergence” and be followed by a new referendum by June 2023 which would decide on the “project” that New Caledonia’s people want to pursue.

But hopes for a smooth transition were jolted when the main indigenous pro-independence movement, the FLNKS, deemed the government’s insistence on going ahead with the referendum “a declaration of war”.

Observers fear that renewed tensions could even spark a return of the kind of violence last seen 30 years ago, before the feuding parties reached successive deals to ensure the island group’s peaceful transition.

The archipelago has been a French territory since 1853. 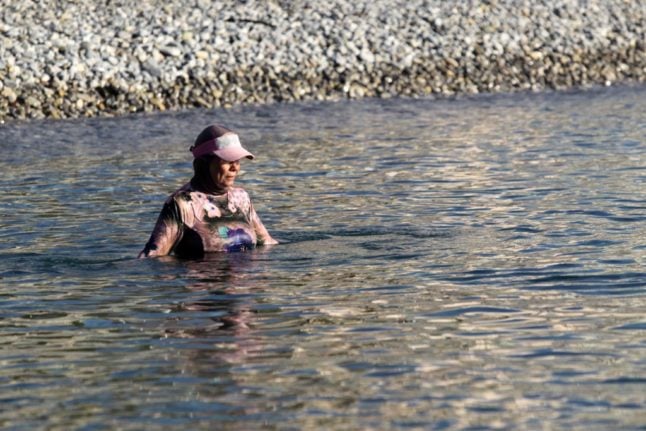 The all-in-one swimsuit, used by some Muslim women to cover their bodies and hair while bathing, has become almost as topical as ice cream and sun hats during France’s holiday season in recent years.

Seen as a symbol of creeping Islamism by its critics and an affront to France’s secular traditions, many right-wingers and some feminists would like to ban it outright.

It is prohibited in most state-run pools — for hygiene, not religious reasons — where strict swimwear rules apply to all, including men who are required to squeeze into tight-fitting trunks.

“Our intention is to remove all of the abnormal clothing restrictions,” mayor Eric Piolle said recently. “The issue is not being for or against the burkini specifically.”

Opponents see it differently, including the influential conservative head of the wider Auvergne-Rhone-Alpes region, Laurent Wauquiez, who has promised to withdraw funding from the city.

“I am convinced that what Mr Piolle is defending is a dreadful dead end for our country,” Wauquiez said at the beginning of May, accusing him of “doing deals with political Islam” to “buy votes”.

The regional spat has put the burkini back in the headlines nationally, animating French talk shows and the political class ahead of parliamentary elections next month.

The issue of how people dress for the pool touches on highly sensitive topics in France, including fears about the influence of Islam and threats to the country’s cherished secularism.

The right to worship freely is constitutionally protected, but the French state is also bound by law to be neutral in religious matters, including inside institutions.

“The burkini aims, purely and simply, to impose Islamist values at the heart of bathing areas and public leisure pursuits,” an open letter written by opposition councillors in Grenoble said last week.

The rules, introduced after a string of terror attacks in France, were eventually struck down as discriminatory.

Three years later, a group of women in Grenoble caused a splash by forcing their way into a pool with burkinis, leading the prime minister at the time to insist that the rules should be followed.

French sports brand Decathlon also found itself at the centre of a similar row in 2019 when it announced plans to sell a “sports hijab” enabling Muslim women to cover their hair while running.

Monday’s vote in Grenoble “is an important moment for everyone concerned and their allies, but also in the fight against Islamophobia and control over women’s bodies”, local campaign group Citizens’ Alliance wrote on its Facebook page.

Demonstrations supporting and opposing the move are also planned in the city following the council meeting where mayor Piolle is expected to succeed in pushing through the change.

French feminists are split, with some seeing the burkini as a symbol of male oppression and others such as Caroline De Haas writing that “no one should be stigmatised in a pool because of their choice of swimwear”.

Grenoble would not be the first to change its rules, however.

The debate about the burkini comes as French Muslim women footballers are battling to overturn a ban on the wearing of religious symbols during competitive matches.

The French Football Federation currently prevents players from playing while wearing “ostentatious” religious symbols such as the Muslim hijab or the Jewish kippa.

A women’s collective known as “les Hijabeuses” launched a legal challenge to the rules in November last year.