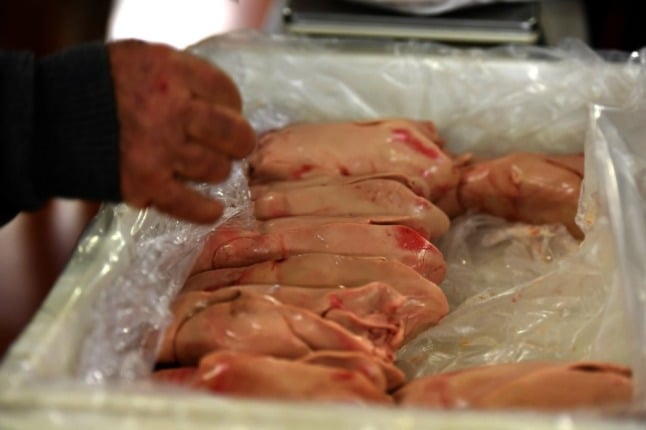 Foie gras - fattened duck liver - will not be served in some school cantines in France over Christmas. (Photo by GEORGES GOBET / AFP)

Many French schools have foie gras on the Christmas lunch menu. It is dished up in a variety of ways – either as a stuffing or as a spread.

But three towns (Grenoble, Strasbourg and Villeurbanne) governed by the Green party have banned the product in school canteens and for official town-hall functions. The move comes after years of pressure from the animal rights group, PETA.

READ ALSO Do French kids get the best school lunches in the world?

Sandra Krief, a city councillor in Grenoble for the Parti Animaliste who also campaigned for the ban, tweeted that the production of foie gras was “one of the worst practices or ‘traditions’ as far as animal cruelty is concerned.”

“Foie gras is a shameful French tradition that should be abolished like bullfighting,” she continued.

France makes about two thirds of the world’s foie gras, produced by force-feeding ducks or geese until the develop the distinct ‘fatty liver’.

In an interview on Sud Radio, Marie-Pierre Pé, director of France’s Inter-professional Committee of Foie Gras makers hit back, saying the ban was “scandalous”.

“Anyone who goes to meet producers understands that the fattening comes towards the end of the animal’s life. It totally respects the life of birds, which are there to produce this famous foie gras that the whole world is jealous of,” she said.

“There is more and more attention being paid towards the wellbeing of the animals.”

PETA is now campaigning to have foie gras scrapped from menu at official town hall functions in other cities, including Bordeaux, Lyon, Marseille and Montpellier.

The French delicacy has been under attack around the world for years.  The EU parliament called on member states to ban the practice of force feeding this summer – and has banned the product from official events in the Strasbourg parliament building. In the United States, California has banned the sale of foie gras produced with force feeding. The British government plans to do the same.

Michelin-starred chef, Alexis Gauthier, has a potential solution that could reconcile animal rights activists and foie gras lovers: Faux gras – a plant based alternative. You can read the recipe HERE or watch the tutorial.