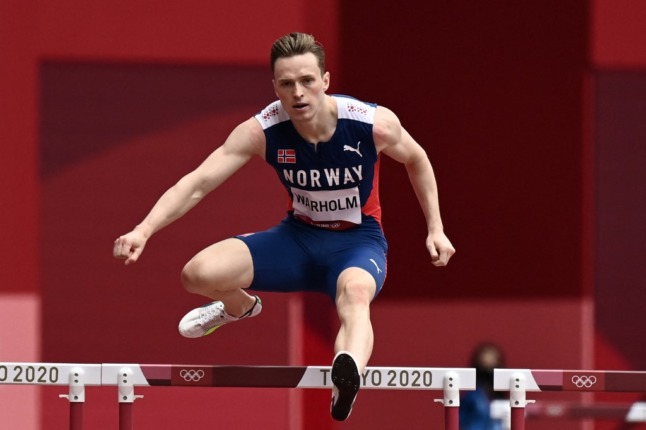 Read about Karsten Warholm, pictured above, being named World Athlete of the Year and all the latest developments of the Omicron variant in Norway with today's roundup of important news. Photo by Jewel Samad / AFP

Following the discovery of the Omicron variant, health authorities and experts worldwide have been trying to work out how effective current vaccine technology is against the new variant.

Geir Buckholm, infection control director at the Norwegian Institute of Public Health (NIPH), has said that with the current information available, there are some fears that vaccines are less effective at protecting against mild and moderate disease caused by the Omicron variant.

“With the information we have, there is a great danger that the vaccines protect less against mild and moderate disease. This is because there are major changes in the areas of the virus where neutralising antibodies must bind,” he explained to newspaper VG.

He added that he hoped that the vaccines offered better protection against those with serious illnesses.

Oslo’s health authorities are asking everyone who attended Louise Restaurant & Bar on Friday, November 26th between 11pm and midnight on Friday and the Old Irish Pub at Majorstua on Saturday, November 27th between 10pm and 1am to take a Covid-19 test.

“Based on the fact that one of those infected came from a trip from South Africa, and considering so many have been infected, Omikron was suspected,” Tine Ravlo, assitant district doctor, told public broadcaster NRK.

Those who have been to these places are being encouraged to stay home until they take a test.

Norway’s 400m hurdler Karsten Warholm has entered the record books by becoming the first Norwegian to be named World Athlete of the Year by the International Athletics Federation.

The award caps of a stellar year for the 25-year-old in which he secured Olympic gold with what’s been dubbed one of the greatest Olympic track performances of all time and was also named Athlete of the Year in Europe.

Over the last 24 hours, 3,780 new coronavirus cases have been detected in Norway. This is 777 more infections than the daily average during the previous seven days, which is 3,003.

Overall, this is 795 cases less than the same day last week. However, the figure for that day was artificially inflated by delays in registering the cases.

In Oslo, 1,075 infections have been recorded. This is a daily record. However, the high number of infections registered may be due to a delay in reporting older cases.

Read about the interval between doses two and three being shortened and the death of Kåre Willoch in today's roundup of important news. Pictured is Holmenkollen in Oslo. Photo by Michael Ankes on Unsplash

“He was a very gracious and nice person who was concerned with people and political issues,” Solberg said.

The former PM pointed to Willoch’s modernisation reform in Norway as his most significant political legacy.

“The most important thing he did was the modernisation of Norway,” she said.

New coronavirus measures are on their way in Norway, with the health minister, Ingvild Kjerkol, set to decide on new restrictions following a rise in infections, outbreaks of the Omicron variant and parts of the health service nearing capacity.

“There will be measures we will notice in our everyday lives,” Kjerkol said to public broadcaster NRK.

“The situation is demanding, and that is the reason why we are now looking at new measures. We have a health service that is in full swing, and our goal is to have control of the pandemic, in the form that the municipalities and hospitals are able to provide proper health care,” Kjerkol explained.

READ ALSO: How could Norway’s Covid-19 restrictions be tightened this week?

The minister didn’t reveal any details on what could be announced but said that decisions would be made on Tuesday.

The interval between vaccine doses two and three for those aged between 64 and 45 will be shortened by a month, Norway’s health ministry has announced.

The interval will now be five months when it was previously six. All adults with serious underlying conditions and those working in the health and care sectors will also have the interval cut.

One in three think Covid-19 measures are too relaxed

A third of Norwegians feel that the current Covid measures in place in Norway are insufficient and need tightening, according to a survey conducted by Norstat for public broadcaster NRK.

As of yesterday, 295 people were hospitalised with Covid-19.